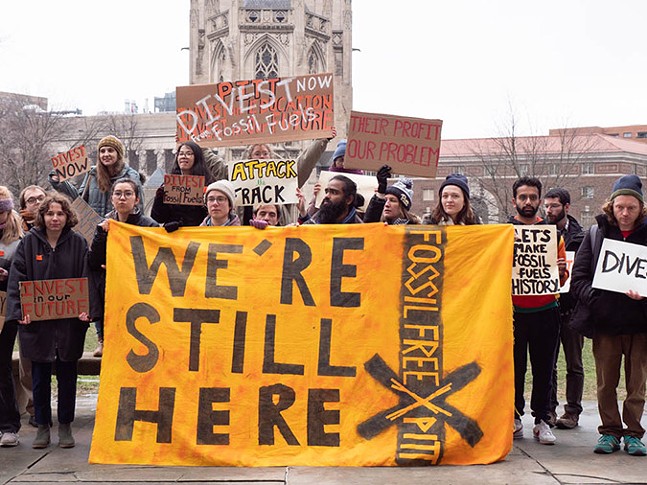 They joined the call that was started by students in 2014 and amplified that message because the Board of Trustees does not currently allow students or community members to voice concerns at their public meetings.

According to the Pittsburgh Business Times, roughly one-third of that amount was invested in coal companies, and the remainder, in oil and natural-gas firms.

Students, alumni, and faculty members at yesterday’s meeting called the fossil fuel industry “economically risky” and argued that Pitt’s investments are not in line with the university’s purported value of sustainability.

“The alumni also demanded a mandated public comment period at public Board of Trustees meetings, so students and community stakeholders have an avenue to voice their concerns over university decisions,” according to the press release.

Student groups have long called for the university to divest in fossil fuel companies. FFPC was founded in 2014 and is made up of nearly 50 student clubs “advocating for the University of Pittsburgh to divest its endowment from the fossil fuel industry,” according to its website.

The FFPC urged Pitt to disclose exactly how much it invested in this industry, and in 2016, the university did just that. In 2017, it was revealed by the Paradise Papers that the University of Pittsburgh is invested in Encap Investments, a hedge-fund invested in Penn Energy, which will supply ethane to the Shell ethane cracker plant in Beaver County upon its completion in the early 2020s.

Currently one of the largest construction projects in the U.S., the plant is being built in Monaca, about 25 miles away from Pittsburgh. It is permitted to produce 2.2 million tons of carbon-dioxide emissions a year, which is the equivalent of adding 480,000 new vehicles to the Pittsburgh area.

The FFPC and other student, alumni, and faculty groups believe the university’s investments in these fossil fuel industries is irresponsible and dangerous.

Photo: Mark Dixon/Blue Lens, LLC
University of Pittsburgh alumni call for the university to divest from fossil fuel companies
“As a graduate student who has come to love the University of Pittsburgh community, I believe that divestment from fossil fuels is one of the strongest ways the university can show that its virtues align with those of the community as a whole,” said Prem Rajgopal, a core Fossil Free Pitt organizer, in a press release. “By continuing to invest in fossil fuels, the university administration is acting completely out of line with the ideals of promoting a sustainable community.”

“If we aspire to educate future leaders, Pitt needs to be ready to be a leader itself. More and more financial players are moving toward fossil fuel divestment, including many institutions of higher learning,” said Pitt Physics professor Ayres Freitas in the press release. “The question is if Pitt will just finally go along with the inevitable, or if it is prepared to be at the forefront.”

In 1987, the University of Pittsburgh divested from its South African holdings to protest the country’s unwillingness to abolish its racial-segregation policies known as apartheid.

According to the press release, Ellen Dorsey, a Pitt alumna who worked on the anti-apartheid campaign, spoke out against the university’s investments in the fossil fuel industry.

“If you own fossil fuels, you own climate change,” she said. “It’s time for Pitt to be on the right side of history.”