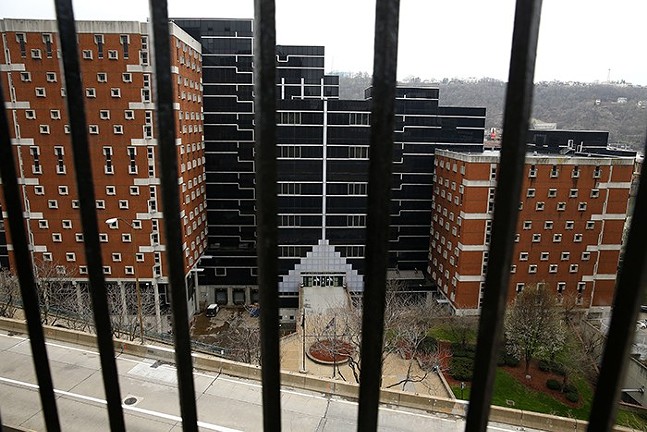 The declarations from the seven incarcerated individuals were provided to City Paper from the Abolitionist Law Center, an advocacy group and law firm, and were shared with the county with ALC’s permission to get a response on the alleged violations.

The county’s 3 p.m. press conference, which was presented over livestream on the county's website, and Facebook and YouTube accounts, was announced with less than 30 minutes' notice.

“If true, the allegations could have been the basis for disciplinary action up to and including termination, as well as potential criminal charges,” Allegheny County wrote in a subsequent press release. “Accordingly, County Manager William D. McKain CPA and Warden Orlando Harper requested the investigatory assistance of the Allegheny County Police Department and its Internal Affairs division.”

At the press conference, County Police Superintendent Chris Kearns said an investigation found that four of the seven statements from the incarcerated individuals given to an Abolitionist Law Center lawyer contained “errors and false statements” and were “misrepresented.”

According to the county, Internal Affairs conducted interviews with six of the seven declarants, interviews the county described as “voluntary.” The county said that three of those interviewed said they did not know or request to speak with Jaclyn Kurin, the attorney with ALC who recorded all seven declarations.

Superintendent Kearns said in the release that the Internal Affairs unit found that some of the incarcerated individuals interviewed denied making certain claims, didn’t remember making them, or stated that they instead had only heard about abusive incidents.

At the end of the Jan. 14 press conference, ACJ Warden Orlando Harper said that earlier that day, the jail had received a phone call from a relative of someone incarcerated at ACJ who alleged their relative had been assaulted by a correctional officer. Harper stated that the allegation was immediately conveyed to jail leadership who pulled the officer in question from the pod. The officer has since been suspended pending possible termination, Harper said. This incident was unrelated to the seven declarations.

Harper then added that he would address any questions and promptly left. It was announced that they had not received any questions from the media and that a press release was forthcoming, and the livestream ended.

Corey Durrett-King, now released from ACJ, said, “You tell them I was forced to do the interview [with Internal Affairs],” in an interview with Pittsburgh Institute for Nonprofit Journalism. “I was under duress and I didn’t know my rights. And my rights weren’t explained to me, like that I could have had an attorney. I didn’t have to tell them anything. I felt forced. They violated everybody.”

Dealon Hill-Johnson told PINJ that he was woken up and taken to another room where he was handcuffed and questioned by Internal Affairs, without explanation. “Once they started asking questions — it was like it was contradicting what I was saying. I don’t know what they were investigating or if they were trying to intimidate. It was weird. Period,” Hill-Johnson told PINJ.

During his interview with Internal Affairs, Hill-Johnson told PINJ that officers asked him if he had felt threatened [by COs] in the last month, and he panicked. Hill-Johnson said he felt he needed a lawyer and stopped the interview.

“If I had said I was threatened, they would have told someone,” Hill-Johnson said. “And I don’t know what’s going to happen to me. It was intimidating.”

County Councilor and Jail Oversight Board member Bethany Hallam said she was “shocked” by what she heard of the ACPD investigation, writing in a statement, “It crosses so many lines that this ‘investigation’ itself should be investigated: who ordered it, were incarcerated individuals read their Miranda rights, what they were asked, under what circumstances, etc.”

“While this entire absurd episode has shocked me to my core, this intimidation spree, initiated by the County administration, targeting those speaking out against the abysmal conditions at the Allegheny County Jail, really hits a new low,” Hallam wrote. “I cannot explain, at all, how the ACJ and ACPD employees thought it was even remotely reasonable for law enforcement officers to speak to incarcerated individuals without a lawyer there to assist them.”

The Abolitionist Law Center also took issue with both the methods and the findings of the county police investigation.

“The Abolitionist Law Center supports Jaclyn Kurin 100%. Her integrity and methodology are both beyond reproach. The material provided to City Paper was vetted word-for-word as indicated in the declarations themselves,” wrote ALC Legal Director Bret Grote in an email to CP.

“Warden Harper and the county police have sunk to a new low with their bullying and defamatory tactics,” Grote continued. “They generated a press release lacking in any specifics after having secret interrogations without notice to counsel conducted in coercive settings with incarcerated people handcuffed and being pressured to talk about privileged communications. This conduct by the County is as embarrassing as it is shameful. We trust the public — the same that approved last year's referendum banning solitary confinement, OC spray, and the restraint chair — will see through this crude and transparent effort to deflect from severe and ongoing human rights violations at ACJ.”