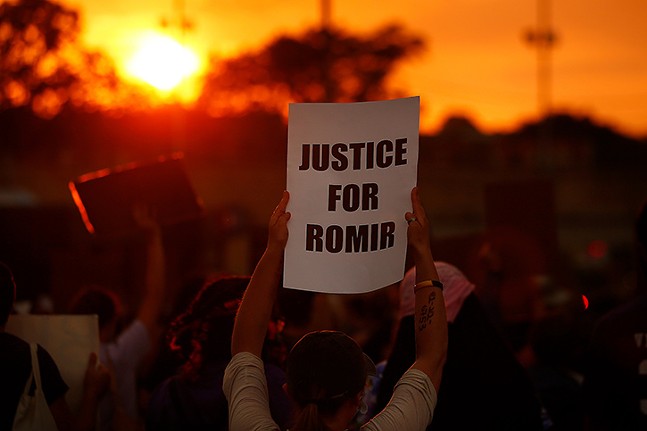 CP photo: Jared Wickerham
A protester holds up a sign in support of Ramir Talley on Sat., Aug. 22, 2020.
When Romir Talley was shot and killed by Wilkinsburg Police, the account given by the police department was that officers were responding to a 911 caller who said they witnessed an assailant hold someone up with a handgun, and then claimed that Talley matched that description. Police officers pursued Talley, and within a minute, they shot Talley seven times after they said he fired first. Wilkinsburg Police officer Robert Gowans was later identified as the shooter.

But that account may be coming into further question, as the lawyer for Talley’s family has obtained a call log from emergency medical services that indicates the police may have been chasing the wrong person.

“If this EMS report is accurate, then we have an extremely big problem on our hands,” Talley family attorney Paul Jubas said to TribLive. “This would basically prove they killed the wrong person.”

The Talley family has been questioning the police account for months and wants Gowans charged, as well as the Wilkinsburg Police department to be disbanded. (The department is one of the last social services the borough provides, as they contract other services out to Pittsburgh).

“We don’t know anything, and we need answers,” said Dana Denson, Talley’s cousin, during a protest in June. “It’s been six months.”

Allegheny County District Attorney Stephen Zappala has also criticized how the case has been handled. His office has since taken over the case.

Jubas is calling on the DA to release the recording of the 911 call, and the statements of Officer Gowans and all other Wilkinsburg Police officers pertaining to the death of Talley.

“These pieces of evidence must be analyzed to determine whether Officer Gowans lied to Allegheny Co. Police Dept. Detectives about receiving confirmation that they were following the alleged perpetrator,” said Jubas in a press release. “The credibility of Officer Gowans’ entire statement, as well as all evidence gathered at the scene, hangs in the balance.”

Wilkinsburg Mayor Marita Garrett has also come under criticism for Talley’s shooting. Today, she said on Facebook that she believes the 911 audio should be released.

“I wholeheartedly agree that the Allegheny County DA’s office needs to release the 911 call and audio,” wrote Garrett on Facebook. “More importantly, to make a final ruling in this investigation, so that further action can be taken. After 9 months, the Talley family and this community deserves answers, regardless of what that may look like.”

On Sept. 3, Garrett said that she instructed Wilkinsburg Police Chief Coleman to place Gowans on administrative duty and that, “The officer is now counteracting that decision,” according to Garrett's Facebook page.

Earlier this year, Gowans reported that a mural in honor of Talley was painted on a building in Wilkinsburg without permission, and that mural was painted over and the artists were charged with felonies.