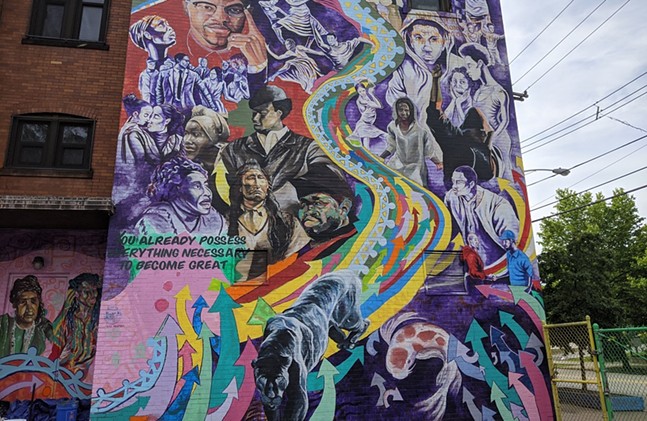 Submissions are open to any professional artist over 18 who is residing or has resided in Western Pennsylvania. The project will also take into account concerns surrounding the spread of COVID-19, as votes on the submissions and interviews with prospective artists will take place virtually.

Pittsburgh Solidarity for Change will unfold from Sept. 21 through Oct. 16 with the help of students from Carlow University's Social Justice Institute, who will help facilitate and collect data related to the works.

Sites are currently being considered and will be announced by the end of August, says Holbrook.

Holbrook, who is Black and grew up in Pittsburgh, has produced hundreds of murals around the world, and believes the project will help generate constructive conversations around topics that often become warped or forgotten.

“With everything going on and with an election coming up, a lot of the issues we've seen get changed and politicized and hijacked,” says Holbrook. “A lot of stuff can get confusing.”

The project is similar to the Liberation Wall, a still-in-progress Black history mural designed to wrap around the exterior of the Community Empowerment Association building in Homewood. Launched by Holbrook and CEA, and done with students from the Moving the Lives of Kids Community Mural Project, the work depicts over 400 years of Black history in the America, using images of Black civil rights leaders, musicians, and others, along with those affected by racial violence, including the 1921 Tulsa massacre and victims of police brutality such as George Floyd and Antwon Rose II.

However, Holbrook says Pittsburgh Solidarity for Change differs from the CEA mural in that it's looking at ways people can fight for positive change when it comes to the chosen issues.

He also wants the artists to represent a diverse array of voices across race and gender lines, with an emphasis on involving members of the area's LGBTQ community. That diversity would also include perspectives on how issues should be addressed, all while presenting a “unified voice artistically for our city.”

“It doesn't mean everyone has to have the same opinion of ways in which a solution can be done, but at least it's everybody contributing,” says Holbrook.
He also sees the project as a response to murals in other cities that he views as “kind of cookie-cutter,” such as the now-famous Black Lives Matter street mural spread out in front of Trump Tower in New York City.

“The Black Lives Matter, it says a lot just having the words, but it doesn't really talk about possible solutions and go more in-depth,” says Holbrook. “We know what the issues are, how can we elaborate on that and make it better for the future.”

A large part of that mission would be making the murals more interactive and educational. Much like the Liberation Wall in Homewood, Holbrook says the Pittsburgh Solidarity for Change murals will include QR codes viewers can scan with their smartphones to access information on the imagery, interviews with the artists, and more.

He also hopes members of the public will contribute messages to the works (while practicing social distancing, of course) as the murals are completed over the course of four weeks.

“I think that could be really powerful, says Holbrook.

The deadline for submissions is Fri., Aug. 21. All proposals must be emailed to info@MLKmural.com with the subject line “Call to Artists/Pittsburgh Solidarity for Change.”