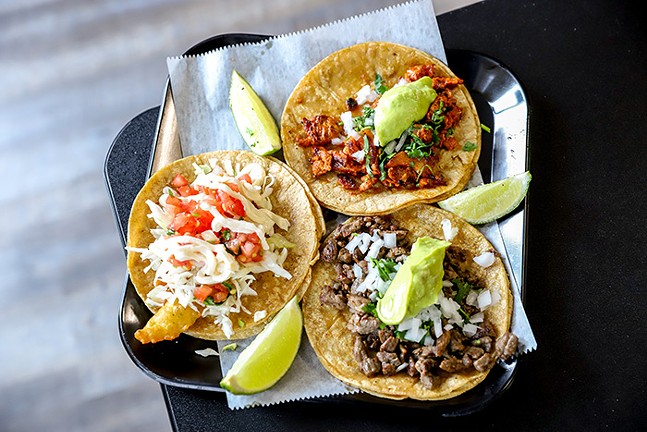 CP Photo: Kaycee Orwig
A selection of tacos from California Taco Shop
Cal-Mex is a cuisine that Pittsburghers probably haven’t heard much about. Like how Tex-Mex combines Texan and Mexican cuisines, Cal-Mex is a combination of authentic Mexican fare and California flavors. Unlike Tex-Mex, which has a strong focus on hearty and gut-busting dishes, Cal-Mex is about highlighting the fresh produce that proliferates in the Golden State. But luckily for Pittsburghers, those West Coast flavors are making their way to the Steel City, and California Taco Shop in Shaler is offering some delicious examples.

The taqueria opened in 2019 and quickly became a local favorite. Though less popular than bigger restaurants like local Mexican food chains Condado or Mad Mex, people were reaching out to me about California Taco Shop anytime I mentioned authentic Mexican cuisine on social media.

When I finally visited the small restaurant located in a strip mall off of Route 8, my expectations were high. Authentic Mexican taquerias are in pretty short supply in Pittsburgh. Beechview, with its small but growing Mexican community, has some solid choices, but, as a native Californian, it’s not always easy to find those authentic flavors here in Pittsburgh.

California Taco shop has those in spades, with the perfect laid-back taqueria atmosphere I’ve been missing: order at the counter, agua frescas and Mexican sodas in the fridge, and an extensive menu.

Being in a nostalgic mood, I ordered everything that looked to be Cal-Mex inspired. This included a rolled taco special, a fried fish taco, a shredded chicken tostada, churros, and a California burrito.

Pittsburghers will probably enjoy the California burrito because it is stuffed with french fries, just like the city’s famous Primanti Bros. sandwiches. But this burrito is San Diego-inspired, and comes with grilled steak, black beans, pico de gallo, and plenty of guacamole. It’s filling, flavorful, and incredibly satisfying. 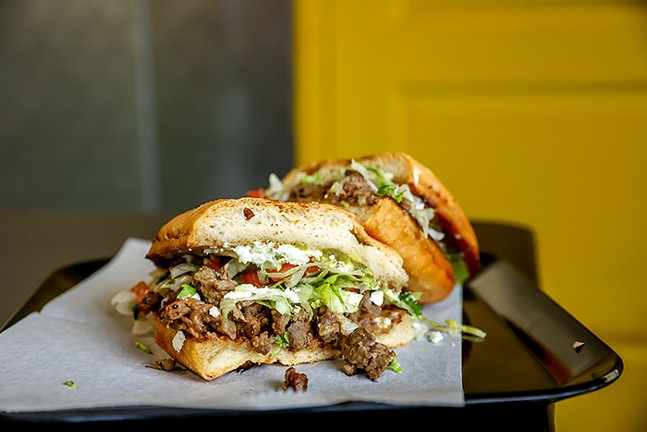 CP Photo: Kaycee Orwig
The rolled taco special is another Southern California specialty. Corn tortillas are stuffed with shredded chicken, then rolled into a cigar shape, and deep fried until crispy. They are then topped with creamy guacamole and shredded cheddar cheese. The rolled tacos were very crispy, but not overcooked. The restaurant even serves Carne Asada Fries, a San Diego treat which covers french fries in grilled, marinated steak, topped with cheese, pico de gallo, guacamole, and sour cream.

The guacamole was a standout on the rolled tacos, and every other dish it graced. California Taco Shop’s guac is super smooth, almost fluffy, and packed with good garlic, savory flavor. It will keep you coming back for more.

And, of course, I had to order the fish taco, which was invented and popularized in Baja California in Mexico, just south of the California border. The shop’s fish taco was a bit different than I was used to, using yellow corn tortillas instead of white flour tortillas, but everything else was spot on. The fish was crispy fried and light, and the cabbage slaw was crunchy, topped with a tangy lime crema sauce.

Nothing at the taqueria was overly spicy or hot, but those craving that heat and kick should try the shop’s green and red salsas, especially the salsa roja.

Pour that salsa over the tostada, which is the best example of this classic Mexican dish I have had in Pittsburgh. Its base is a double tortilla, fried to crispy perfection, covered in meat of your choosing, shredded lettuce, cotija cheese, pico de gallo salsa, and sour cream. Even under that pile of ingredients, the fried tortillas still broke with a loud audible crunch. This dish really highlighted the focus on fresh produce that Cal-Mex is known for. 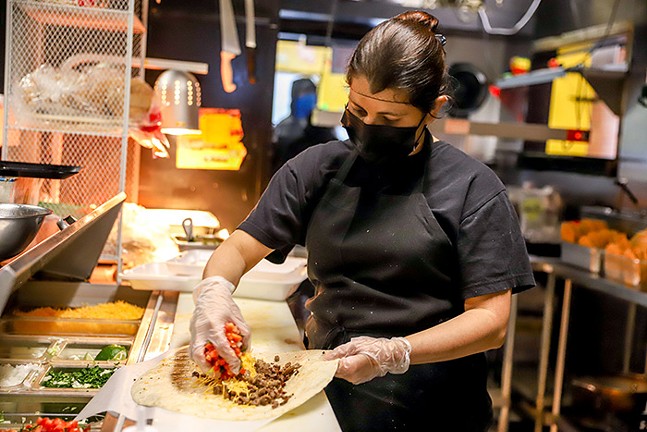 CP Photo: Kaycee Orwig
To finish the meal, I ordered some churros, which were the kind I’ve been searching for since I was a kid. Straight, crispy, with just enough softness in the center. Perfection.

California Taco Shop became a favorite relatively quickly, and it’s understandable why. The shop is bridging that gap in between Mexican-American chains and authentic Mexican joints that have dishes Pittsburgh isn’t quite accustomed to yet. Its location in Shaler is also perfect for those in the North Hills or Allegheny River Valley who don’t want to have to visit Beechview for some great south of the border flavors.
California Taco Shop. 890 Butler St., Shaler. californiatacoshoppittsburgh.com