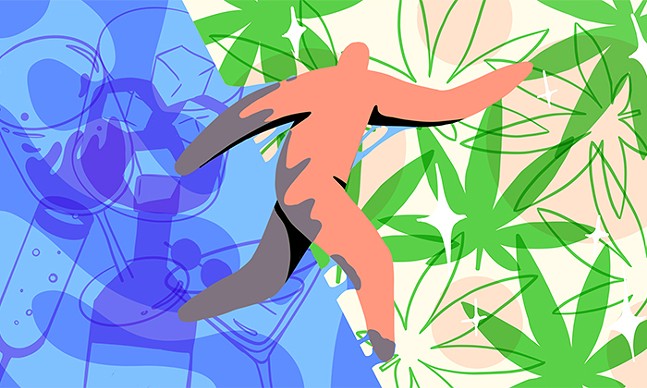 CP Illustration: Lucy Chen
Pittsburgh is a drinking town. The Steel City has been named the No. 1 city in the U.S. for beer drinkers, and it’s no surprise for a town so well known for its sports fans and events which encourage alcohol during celebrations. But this can be difficult for people who don’t drink, or who are looking to drink less.

For Pittsburghers like Marlene Salomon, being California sober, or “Cali Sober” for short, has been a life changer.

Cali Sober has become more popular in recent years, with celebrities like Demi Lovato bringing the term into the spotlight. Its exact definitions vary, but largely those who practice it define it as regularly using marijuana products, and sometimes hallucinogens, instead of drinking. While it may sound like a trend, many people are using cannabis primarily for health and wellness reasons.

Salomon, a Haitian immigrant who works in nightlife, says she smokes weed every day for pain management, and that she started re-examining her relationship with alcohol last November when she realized that her drinking and drug use had gotten out of control.

“A lot of my friends were dying,” Salomon says. “And then I realized at one point, that while some of our friends had died, we were still partying together. And that's whenever it hit me. I was, like, ‘Oh, my God, like, this is beyond messed up.’”

Some medical professionals have argued that becoming Cali Sober isn’t a safer choice than alcohol addiction.

“The term is ambiguous and kind of a misnomer,” psychiatrist and addiction specialist Akhil Anand told The Cleveland Clinic. “After all, you’re not sober if you’re still using mind-altering substances.”

But Salomon says marijuana helps her find relief from health issues. She has GERD (gastroesophageal reflux disease), a condition in which the stomach acid frequently flows into the esophagus, and she says smoking helps take away the nausea that her medication causes. She also has had two spinal fusions, a surgery where, during recovery, people are often prescribed Oxycontin or other strong opioids for pain management.

For Ali S., a former Pittsburgher now living in Florida who asked not to use her last name because of her work, the pressure to drink while living in Pittsburgh was palpable.

“I did start to feel less supported by my friends because it was so embedded in our culture,” she says. “I would also receive pressure from people saying things like, ‘Can you just go to a bar and not drink?’ And I can do that now, but for the first couple of years, it was challenging because being in a bar was just triggering.”

Ali started questioning her alcohol use in 2017 when she noticed that after she drank any amount of alcohol, she would have a panic attack. She says it wasn’t until last year that she heard the term “Cali Sober” in a song and thought that it fit her lifestyle and choices.

Medical marijuana helps manage her anxiety, she says, while drinking exacerbated it. For this reason, she also uses it almost every day, but says she doesn’t use it all the time because “weed sometimes makes it hard to socialize in a serious environment.”

As far as products go, both Salomon and Ali like to use flower, but Salomon also uses concentrates like dabs, waxes, and oils.

She echoes Ali’s opinion that there is a lot of pressure to drink within the city of Pittsburgh. “This whole entire city is centered around drinking and alcoholism. And I've lost so many friends from that because nobody wants to do anything else besides drink, except for the group of sober friends that I have,” Salomon says. “Everybody just wants to sit in a bar all day. It's just, the pressure is unreal. Even if you do go and hang out with them, you're stuck around a bunch of people that make you uncomfortable”

Salomon says that she started smoking in middle school, but before then, she — like many young people — was shown anti-marijuana propaganda that made it seem like smoking would ruin her life. She says she remembers PSAs that said marijuana made you lazy and “lose brain cells.”

Discovering that marijuana wouldn’t ruin her life and, in fact, could improve it by helping her manage things like pain and anxiety really changed Salomon’s experience with it.

Ali agrees. She says it took her awhile to find the right dosage to help manage her anxiety, but now that she has, she’s realized just how healing being Cali Sober can be.