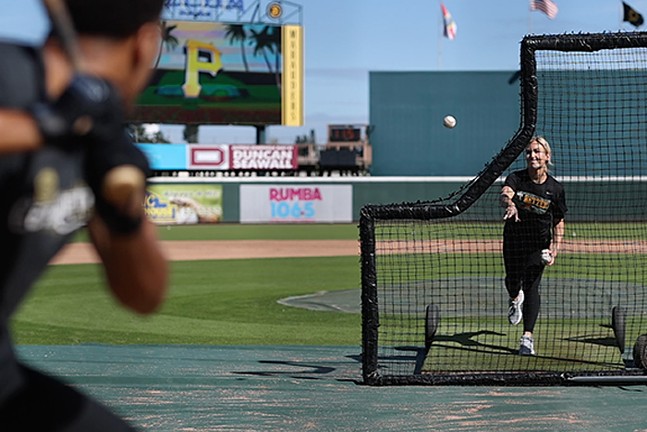 “I initially interviewed with [minor league technology and video coordinator Marc Roche] as a minor league ops assistant, and we ended up having almost an hour-long conversation,” Callahan says.

After talking with Callahan, Roche asked her if she would be willing to fly out to Florida for their hitters camp, and from there it was a working interview to see if she would be a good fit for a coaching role. She was eventually offered the position.

Callahan will serve as a development coach for the organization, based out of the Pirate City complex in Bradenton, Fla.

Callahan grew up loving baseball and even played softball and baseball when she was growing up.

“[In middle school], other girls weren’t really playing softball in my area, and there just wasn’t really a team,” she says. “And so I was actually going to stop playing until my little brother's Little League coach was like, 'Well, why don’t you just try out for the Little League baseball team?' And so I stopped playing softball right around middle school and started playing baseball.”

Once she started playing baseball, her excitement for the game was sparked. She then went on to play softball in high school and college and has since worked with the Cincinnati Reds, Staten Island Yankees, and the Brewster Whitecaps in the Cape Cod League.

Working as a woman in a male-dominated field can be tough, but Callahan’s experience has been a valuable one for her.

“My big philosophy is I want to learn as much as I can,” she says. “I’m willing to do anything to help my team.”

Callahan remembers hearing about Rachel Balkovec, the New York Yankees manager, and that was when she realized a career in sports was possible for her as well.

“To be completely transparent, I didn’t think it was possible that I’d be able to be a coach,” she says. “Not because I didn’t think I was capable. But I remember where I was when I first saw that Balkovec got hired as a coach. I still remember pulling it up on my phone and reading it and just being like, 'Oh my gosh, this is unreal.'"

She credits people like Balkovec and Sewickley native Bianca Smith, who became the first Black woman to coach in professional baseball, for "paving the way."

"It’s empowering, and it’s really cool to be a part of that,” she says.

Some advice Callahan would give to other women looking to enter the sports industry is to roll with the punches because if you’re working hard, learning, and actively seeking opportunities, that is the key.

“I actually applied to a coaching position last year, and I didn’t even get an interview for a professional team,” Callahan says. “And it was tough, I’m not gonna lie. You can get discouraged, but it’s like, absolutely not, you know? I may not have gotten the coaching position last year, but I was back with the Reds. And I did that job to the best of my abilities, I showed up every single day, I tried my best, and it set me up to be in the position I’m at this year. You know, things happen for a reason and we just have to keep at it, can’t give up, and stay persistent.”

Callahan has big goals for the future, stating she wants to win a World Series within the next five years.

“Things change over a period of time, so I don’t know what route it’s going to be but I know that day in and day out, we’re going to try our best,” she says. “Learn new things, try new things, whatever we can to get better.”