Portuguese native Toni Pais was probably Pittsburgh’s first celebrity chef. Well over a decade ago, he rose to renown with Baum Vivant, a traditional fine-dining establishment that regularly topped local “Best Of” lists. Two more popular restaurants followed. Café Zinho, on a side street off Ellsworth Avenue, was intimate and eclectically decorated, reviving a bit of Shadyside’s bygone bohemian vibe. Café Zao in the Cultural District — zinho being Portuguese for little, zao for big — was more polished, elegant and upscale. Today, Baum Vivant and Café Zao are gone, and only Zinho remains of this well-regarded trio.

But don’t let Café Zinho’s size and almost domestic coziness fool you: This is not homey food, but rather a refined combination of Portuguese and Continental cuisines, with a strong emphasis on seafood, as befits Pais’ native, coastal culture. The starters are especially appealing, and Jason decided to order an array of small plates in lieu of an entree.

Goat cheese baked in puff pastry with Brazil nuts and Asian pear sauce was luscious, the tanginess of the chevre a pleasant change from the more usual baked brie. The nuts were scanty, but not particularly missed. The sauce was light, creamy and almost superfluous.

Octopus tentacles were sautéed with garlic, onions, peppers and tomatoes in a pleasing Mediterranean preparation. The vegetables were heavenly, as only peak summer produce can be, but the tentacles’ tenderness flirted dangerously with mushiness. A better fit for this dish would have been the smoky notes and crisp edges of octopus that has been grilled. 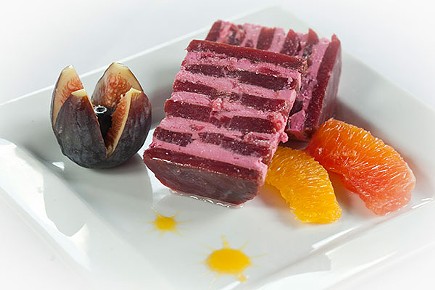 Beet and goat cheese timbale (“tower,” for the non-francophone among us) was a pleasing presentation, alternating discs of pale pink and deep crimson in a tall stack. But — yet again, a “but” — the flavor was a bit flat, the orange vinaigrette not tart enough to make an impact with the sweet beets and mild cheese. Angelique found this dish altogether too sweet, almost dessert-like.

But the last of our small plates, pheasant terrine, was fully successful. The fowl was firm and somewhat rich, complemented by whole-grain mustard that was suitably bold and sweetly contrasting pickled red onions. Cornichons were a touch sweet as well, somewhat duplicating the role of the onions, but we’ll chalk that up to personal preference.

Crab cakes had very little binder, with the upside being strong crab flavor; the downside was that a good, well-seasoned binder can add flavor depth and dimension, and this was missing. To some extent, the chilled chimichurri aioli made up for it with its combination of herbal intensity and creamy richness; we slathered it liberally on each cake. This was a good example of Zinho finding ways to offer local favorites with a Portuguese accent.

Similarly, a lamb burger topped with brie and caramelized onions is Zinho’s answer to that Pittsburgh restaurant staple, the burger. The patty was big and juicy, but underseasoned, and though it was pink in the middle with no char on the outside, it had a touch of that gamy lamb flavor, as if overdone. But the tangy melted brie; sweet, soft onions; and big, pillowy bun helped mask these deficits with their rich tastes and textures.


Dining companions sampled some of Zinho’s other seafood offerings. Signature mariscada — Portuguese shellfish stew in a tomato broth — offered too-firm scallops and clams, and filet of salmon was also overdone, taking on a fishy flavor.

Café Zinho, once one of Pittsburgh’s most creative restaurants, now coexists with newer concepts, younger chefs and the bolder, brasher trends of the moment. Does that mean time has passed it by? We think not; Toni Pais’ personal take on classic Continental cuisine might be conservative by today’s standards, but it remains appealing, and the restaurant itself stands apart from trendiness, its offhand brand of shabby chic still uniquely resplendent after all these years. Only overdone meats and timid flavors marked Café Zinho as behind the standards of today’s robust local restaurant scene, especially at top-tier prices (and note: it’s cash or personal check only).