I expected classic dishes on the menu. Instead, plates take twists and turns with Asian, Creole, and Italian flavors. Café Du Jour stays true to its meaning (“of the day”) with a mismatched, dynamic menu.

Planted around 11th street and Carson, Café Du Jour has been part of the South Side since 2001. The cafe hides in the shadow of Jack’s Bar, blending in with drab buildings, not really standing out.

Smoke billowed out the front door when I first entered Café Du Jour. A char fog filled the snug restaurant. Three staffers dipped in and out of the back of house, though the kitchen is actually no bigger than a narrow hallway. The kitchen felt cinematic, with the haze producing a film-style vintage filter. It had a retro feel to it, with pots and pans strewn around a stove that amounted to little more than a raised hotplate.

Tables nestle in corners of the homey dining room, close enough for diners to brush elbows on a busy night. Walls are plastered with pictures of the city’s history, featuring a life-size Pittsburgh Pirate smiling from ear to ear. Empty wine bottles teeter above, stacked so high one wrong move would send them all tumbling. A backdoor opens to a spacious patio for leisurely summer meals.

Chefs at Café Du Jour provide a small, but fiercely flavored selection. Options branch out in all directions, with a five-spice Korean BBQ sandwich sitting on the same menu as a shrimp po' boy.

I crafted a meal out of a curried soup of potato and shrimp, herbed potato pancakes topped with pork loin, brie, apple butter, and arugula, and the spinach and pecorino dip, served with a mini baguette, marinated tomatoes, and fresh basil. I cozied up to watch and listen as the kitchen prepared my meal. 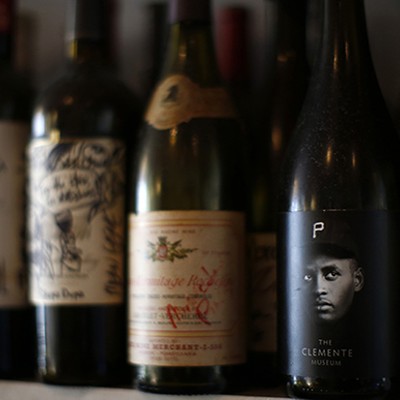 The soup arrived first, garnished beautifully with crushed hazelnuts and radish. It was as smooth as a soup could be, and the thin potato broth was just heavy enough to support a mix of vegetables and spices. Fresh citrus hit with cilantro, followed by a warm spice from coriander seed, and finished with a curry burn.

The potato pancakes followed. At the base of each potato pillar sat a massive pancake, thick enough to moonlight as a hockey puck. It was drowned with an unfortunately large spoonful of the sweet cinnamon-laden apple butter, a clever but overdone finish.

Dessert was a blueberry croissant pudding finished with white chocolate sauce and a whipped crème fraiche; It stole the show. The top cracked like a crème brulée. Blueberries spilled out of the molten center, collapsing under the sugary crust. All I needed was a spatula to wipe the plate clean.

The menu at Café Du Jour zig-zags around a culinary map and refuses to be categorized, a little manic and totally unpredictable. It may be “of the day,” but one thing will never change.  Every day, Café Du Jour is seriously delicious.

1. Yelling regulars
Eating with the restaurant’s regulars is akin to eating in my family kitchen. A regular yells conversation to the chefs, who scream answers back. It’s oddly comforting to witness such a loud display of friendship.

2. BYOB
There’s no shortage of BYOB restaurants in the ‘Burgh and Café Du Jour falls right in line with the rest. Pick out the perfect bottle of wine or tote a six-pack to the table for the small price of $2 per glass.

3. Personal-sized baguette
Forget personal pan pizzas! Café Du Jour serves an entire mini baguette with its spinach dip. It is sliced, seasoned, and freshly toasted. What more could you ask for?