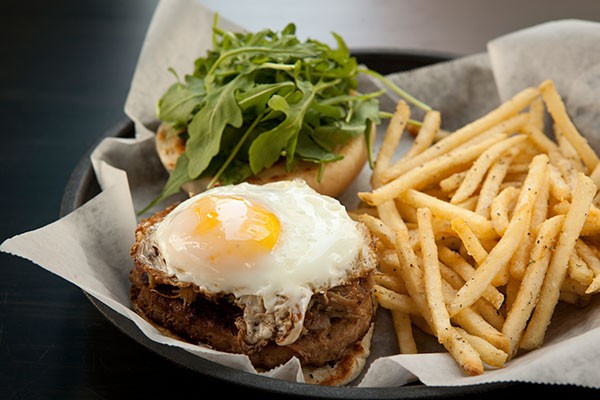 Photo by Heather Mull
The Turducken Burger is a turkey burger with duck confit, sage aioli, fried egg and arugula.

Once, we had very low expectations of bar food. If it was greasy, salty and meaty, it was doing its job, which was, essentially, to support the consumption of the bar's primary commodity: beer.

Not anymore. These days, beer-drinkers can be expected to have a sophistication about food, and any new bar had better have a menu that, if not actually ambitious, at least shows an awareness of post-1995 food trends. Unfortunately, that frequently means little more than adding a few "updated" dishes to the tired, albeit tasty, trinity of wings, burgers and pizza.

Thus jaded, we didn't rush to BZ Bar, in the old Firewaters space across from PNC Park. Sure, the website promised "twisted American," but words are cheap. Still, with baseball season approaching and an extra hour of daylight inviting us to stroll along the river, BZ's location was strategically convenient, its promise of better bar food appealing.

The space, sized for a game-night crowd, could perhaps best be described as "sports bar plus." The electric-blue and black palette was a bold break from the usual Pittsburgh sports scheme, and oversized, black-and-white photos of local architecture seemed to acknowledge that BZ's patrons might even have more on their minds than sports. Ultimately, though, it was the phalanx of flat-screen TVs that dominated the space.

The menu was a much more intriguing departure from sports-bar convention. In addition to a handful of truly distinctive items, like turducken burger and pear-and-bleu-cheese pizza, there were many more options that promised real attention to detail, from gremolata in the bleu-cheese dressing to pickled red onions on the Cuban sandwich. If a good menu is one that offers so many tempting dishes that it's hard to choose, this one met the test.

Brisket sliders made a promising start. Toasted buns held mounds of shredded, not pulverized, beef that was lightly sauced and tasted mostly of smoke, while sweet caramelized onions and morsels of tangy bleu cheese rounded out these satisfying little sandwiches.

Angelique followed these with a full-size burger that, as far as we know, is unique to BZ: the turducken. The turkey burger alone would have been excellent, with a robust, meaty texture, plenty of moisture and good (if somewhat over-salty) seasoning. But then it was topped with duck confit — salt-cured dark meat that has been slow-cooked in its own rendered fat — and, in case that wasn't rich enough, a fried egg. A handful of arugula seemed more like a symbolic nod to healthful eating, though in theory its peppery taste should have stood a chance; the flavor of sage aioli, meanwhile, was completely overwhelmed by the decadence of the turducken.

Swooning from the turducken, we passed on the marvelous-sounding duck pizza (with confit, chevre and arugula) and went with the pork-forward "racy swine." We liked its thin but chewy crust and its ample meat coverage of crumbled chorizo, standard pepperoni and chewy bacon; there was enough cheese to have a presence without drowning the slices in greasy goo.

Truffle fries were almost delicious, but too much salt and not enough well-browned tips left them merely tasty. A lemon "aioli" instead was thick like compound butter. Macaroni and cheese — an upscale four-cheese blend with gemelli pasta, herbs and a toasted panko-crumb topping — was somehow not salty enough, and ultimately bland.

Jason's buffalo-chicken sandwich boasted well-charred yet moist meat, a slightly chewy bun and a wonderful topping of thinly sliced cucumber and radish; it was more like a Thai salad than a mere garnish. Unfortunately, the piri-piri hot sauce was too runny, and not quite fiery enough. But sides of a very good vinegar slaw and, improbably, a quinoa pilaf, made for a sophisticated plate.

We also ordered an a la carte side dish of roasted vegetables, and were pleased to see that each vegetable had been cut into a different shape, a sign that the kitchen was aware of their various starch and moisture contents and how they would affect cooking. Alas, the whole dish was woefully underdone: A few more minutes in the oven might have yielded roasted vegetables near perfection.

BZ Bar and Grill is one of a select few sports bars that really does deliver above-average food. Some of it was way above average, all of it was thoughtfully conceived, and where the execution didn't quite match the ambition, we saw plenty of evidence that the kitchen is capable of upping its game.