The décor is over-the-top, but this Downtown venue takes its food seriously 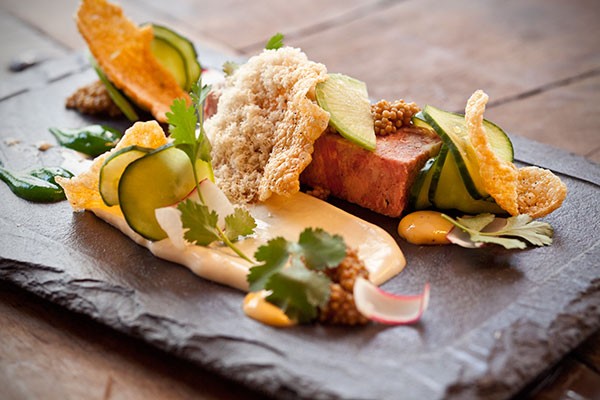 At its most basic, food is an essential requirement for physical survival. Beyond that, everyone knows there are strong sensual and social aspects to food. Food can be political, too. But can it be ... literary? Intellectual? Witty? Can food embrace the retro, ironic longings of hipster culture, and still be good to eat?

There is more than one restaurant daring to pose these questions, but Butcher and the Rye may have the most satisfying answers.

Let's start with the name. In case its punniness leaves any doubt, Butcher and the Rye features a wall-size mural of Salinger characters Holden Caulfield and his little sister Phoebe with the totemic carousel and titular field of rye superimposed on the Pittsburgh skyline. The rest of the interior is chockablock with taxidermy, bell jars, old typewriters and books, flocked wallpaper (much of it featuring the very animals available on the menu), mirrors, and, yes, an antler chandelier. It was like dining inside a Wes Anderson movie, down to the check that arrived in a little leather-bound notebook with an invitation to leave our comments.

And, while it has become de rigueur for restaurants to tout their local sourcing of ingredients, Butcher and the Rye is the first to dare to apply this credo to pre-sliced Schwebel's white bread (used, in this case, as a crouton beneath a fried quail). It would all be easy to mock — except that it worked. The twee decor made for fun dinner-table conversation, the service was welcoming and knowledgeable, and, most importantly, the food (not to mention the house-recipe cocktails) was outstanding.

Caesar salad is a classic because its counterintuitive blend of ingredients creates such an unexpectedly perfect balance of flavors. Butcher dares to upset this balance by substituting kale (tender, baby kale, not the tough stuff) for canonical romaine and, instead of topping the salad with croutons, heaping it on a whole slice of anchovy toast. The lemony dressing was distinctly fruit-forward, while the egg represented separately in dollops of aioli. Many a Caesar has tried to reinvent the wheel, but this might be the first that actually achieved something both new and worthwhile.

On the other hand, dry-aged tartare went to great lengths to distinguish itself, but ultimately offered a fairly classic preparation. The beef, to be sure, was exceptional, minced (not ground) and flavorful on just-right toasts. But the array of sauces smeared, squirted and dripped around it, while certainly tasty, didn't open our palates the way the salad had.

Roasted Brussels sprouts, roasted deep and dark, mostly avoided the charred flavor that can overwhelm sprouts cooked under high heat, and their tenderness didn't translate to mush. A smear of preserved lemon aioli on the edge of the bowl was bright and creamy. Even in this enlightened era of sprouts (unlike those you hated as a kid), these were maybe the best we've ever had.

Macaroni-and-cheese is enjoying its second decade of revival as a fancier food, and Butcher reminds us why: A lengthy list of cheeses added up to richness that transcended mere caloric heft to achieve an impressive depth of flavor. The crispy breadcrumb topping was light, buttery and crunchy in a way that conveyed care and attention. 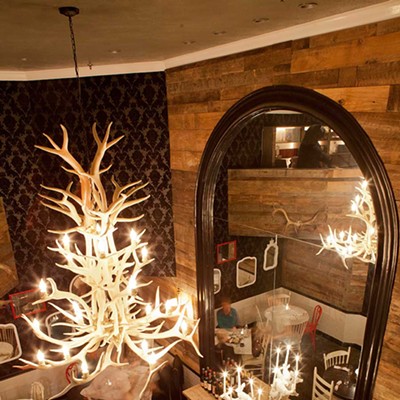 True to the subtext of the decor's taxidermy, Butcher's menu features game. A quail special was semi-deboned, floured with black and cayenne pepper and fried whole. The coating was crisp and the meat juicy, but it could have been more tender. Asked how we'd like it done, we'd said we'd trust the chef, but the result was at times chewy; while this may happen with game birds, it seemed avoidable with such a tiny one.

Braised, shredded rabbit was served with winter vegetables and pappardelle in a preparation reminiscent of beef bourguignon. Sweet and lush, it was great winter comfort food, but the beyond-al-dente noodles appeared to have been thrown into the sauce raw, where they didn't completely cook. Their toughness was a distraction.

The burger was composed of two cuts of meat, as is the current fashion, and for once the distinction was apparent, with the patty having a meaty, pleasingly non-uniform texture. The fries were so deeply browned as to evoke sweet-potato fries. A sour pickle was the third distinct pickle we were served, along with a bread-and-butter pickle with onion, and a simple rice-vinegar pickle. All were tasty and crisp.

Its sensibility may be amusingly off-kilter, its ambience over-the-top, but one thing Butcher and the Rye surely takes seriously is food.