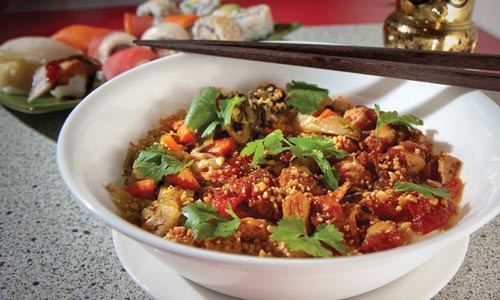 In her life before Pittsburgh, Angelique once lived near a café whose unique business model caused her and her friends to nickname it, fondly, "The Sushi-Ice Cream Place." As unlikely a pairing as these two foods were, Angelique knew that they were not to be consumed together in a Butter Pecan-Salmon Skin Roll or any other such atrocity. No, the point was that sometimes Angelique was in the mood for sushi, and other times, for ice cream. Having both of these delicacies under one roof made The Sushi-Ice Cream Place her most versatile -- and therefore most-frequented -- local eatery.

It just goes to show that sushi is not just the domain of Japanese restaurants anymore. In less than 30 years, raw fish has gone from culinary dare to de rigueur. If The Sushi-Ice Cream Place is by far the most eccentric pairing we've seen of sushi with other cuisines, it sure isn't the only one: Just as Thai restaurants once felt obliged to offer Chinese dishes for skeptical Americans, so do many Chinese and Southeast Asian restaurants now offer a sushi bar.

Burma-Tokyo Restaurant comes by its sushi offerings more directly than most. The owners, sister and brother Ddhen Sander Khin and Bdkyaoo Moe Khin, emigrated from Burma to the United States, training and working as sushi chefs in California before making their way to Pittsburgh. Here, on Atwood Street -- Oakland's restaurant row -- the two have created a menu that pairs their learned Japanese specialty with a selection of cooked dishes from their native Burma and several neighboring countries.

At first, we were perplexed to see foods from Thailand, India, Cambodia, Korea and other Asian lands alongside just a few dishes from Burma itself. Then we realized that Burma, perched on the western edge of Southeast Asia, is a culinary crossroads, and so these dishes represent the sort of Thai or Indian food with which the Burmese might be familiar. But they were new to us, making for a refreshingly untried menu.

The rich influences on Burmese cuisine were evident from the first bite of samosa, served as a complimentary appetizer. Far from the potato-centric tetrahedrons of India, these were flatter triangles filled with savory vegetables of varying textures -- Angelique had to be convinced there was no meat -- in an ultra-crisp, even brittle wrapper. Another starter, of tempura shrimp, featured sweet, substantial prawns with a crackly-crunchy panko crust.

Jason's first bite of Burmese shan tribe noodles confirmed that Burmese food is distinctive. The sauce -- made from chili paste, sour tofu paste and tomato sauce -- was light in consistency but intense in flavor. Meanwhile, the wide variety of included vegetables, a number of them unknown to us, offered an experience similar to the samosas. The combination of flavors -- fermented black beans, pickled vegetables, lightly cooked greens -- managed to taste both fresh and fermented at once. The effect was big and bold in a way rarely seen in Western cooking, and rarely tasted in Asian cooking locally.

Kyae oae was a Burmese soup of chicken broth filled with rice vermicelli, scallions, mustard greens, hard-boiled egg and a variety of meatballs (made from fish, pork and poultry) and tofu. Each ingredient contributed a distinctive savory note to the mildly seasoned soup. Dan pauk, a chicken-and-rice dish from India, contained raisins, cashews, star-anise seed and edible flowers, rounding out the moist, meaty chicken and flavoring the rice with nutty sweetness.

A Laotian dish described as "peppermint leaf with choice of meat" was the only disappointing dish we tried. Effectively a stir-fry, it contained beef that was on the tough side and a veritable kitchen sink of vegetables, too many to add up to a specific flavor-quality. The mint, if it was present, was drowned out by this panoply of other ingredients.

Finally, from the sushi bar, we ordered a small platter of nigiri and a Burma roll, a specialty of the house created by Ms. Khin herself. The nigiri featured excellent, silky firm slices of fish; our only quibble was that the tuna/maguro was a bit watery-tasting, a common flaw when raw tuna is of less-than-premium quality. The Burma roll consisted of shreds of steamed blue crab and tempura shrimp atop an inside-out roll filled with cucumber, avocado and cream cheese, uniting a variety of textures and flavors that harmonized nicely. The Khins' background as sushi chefs was also apparent in the attractive presentation of the sushi.

With professionally prepared sushi and delicious Asian dishes, Burma-Tokyo is a marvelous addition, not only to international Oakland, but to Pittsburgh's increasingly diverse dining scene. Unlike the other countries whose cuisines are represented in local restaurants, most of us are unlikely to experience the food of Burma in its native setting. We are fortunate that the Khins have brought this food, and its many delicious influences, to us.