Some great singing only partially redeems some really bad filmmaking. 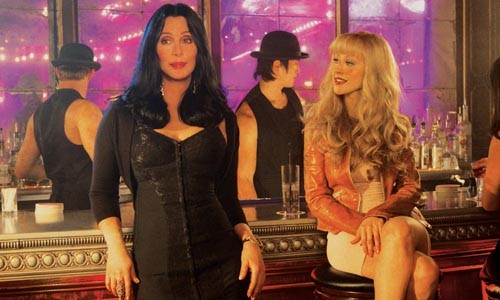 These dolls can sure sing! Cher (left) and Christina Aguilera

This is not a metaphysical puzzle: It's the best way I can think of to characterize layer upon layer of bad filmmaking with some beautiful singing at its core. The actors in the movie are also beautiful; unfortunately, that's all singing needs to be. I realize that Antin, a former actor, made Burlesque as an excuse for the music, but would it have killed him not to insult us with the rest of it? I've seen more sophisticated episodes of That's So Raven. As a director, Antin robs the grave of Bob Fosse, but also, with his jerky camera and orange hue, the visual oeuvre of Tony Scott. Call it Sweet Charity Cabaret meets Top Gun.

Burlesque opens in Iowa -- or "Iowa," I suspect, because I thought the Heartland was a place where people give you their backs, and the shirts to go with it, if your crops should happen to die. Our plucky heroine is Ali (Christina Aguilera), who just knows that, in all of the world so far, she's the greatest star. Too bad she's a dive barmaid with a chintzy boss who rains on her parade. So one day, she takes what she's owed from the cash register and heads for cutthroat L.A.

Where, soon enough, she stumbles upon the Burlesque Lounge, with its jazzy live band and a team of high-strung vixens -- you could say she goes from rags to bitches -- who lip-synch and dance to recordings of bump 'n' grind oldies. The proprietress is tough ol' Tess (Cher), and she's in debt up to her eyebrows (which used to be, I'm guessing, her chin). Tess co-owns the place with her ex-husband (Peter Gallagher), who wants to accept a million-dollar offer from a McDreamy hotshot real-estate developer (Eric Dane). But the club is Tess' life, so with the support of her gently gay best friend and costumer (Stanley Tucci), she says no.

Meanwhile, Ali rooms with Jack (Cam Gigandet), an affable bartender at the club who wears more eyeliner than she does. He's straight -- no, really, he is -- and has a fiancée in New York, so he immediately falls for Ali, who muscles her way onto the stage at the club (Tess is really a softie), and who, one day, gets to sing! And guess what? Has that girl got a set! But it's still not enough to save the club -- until, it turns out, she's not as blonde as she looks.

The acting in Burlesque is pretty bad -- I mean, Showgirls bad at times -- and the hackneyed script is even worse. (I'm sure a drunken Saturday-night audience will howl with camp laughter.) Only Tucci, a stage actor, knows how to make artifice like this seem sincere, even touching. Gigandet is certainly good-looking, but if you're going to be that listless an actor, you need to look like Jake Gyllenhaal.

Cher has never really been a very good actresss, but she can sing, and just as important, she has a persona: Mock those lips and that tongue if you like -- they're captivating, and she's a star. On the other hand, Aguilera is flat on screen in every way but three. (I already said she can sing.) If only someone would put Cher in a movie with Madonna: She's no actress either, but she has presence, too, and wouldn't it be great to see these two uninominal legends perform together?

By the way, Burlesque isn't a musical. It's a drama about people who sing and dance. The difference is more than academic. In Glee, which is a musical, albeit about people who sing and dance, we can accept that they're not famous, and that they sing in the halls, because the genre is artificial by nature. But how on earth is Ali not a mega-star? Or Tess, for that matter? Even (or especially) in L.A., it defies credibility.

We're left only to appreciate some lavish dance numbers and a few torch songs, all performed well by the two reedy ladies. Streisand sings from her lungs, but Cher and Aguilera sing from their throats. It's the difference between being knocked over by a strong wind or being jostled by an earthquake. Either way, it's a force of nature.