An organic, farm-to-table restaurant with a thoughtful selection of sandwiches, burgers and hot dogs and sides 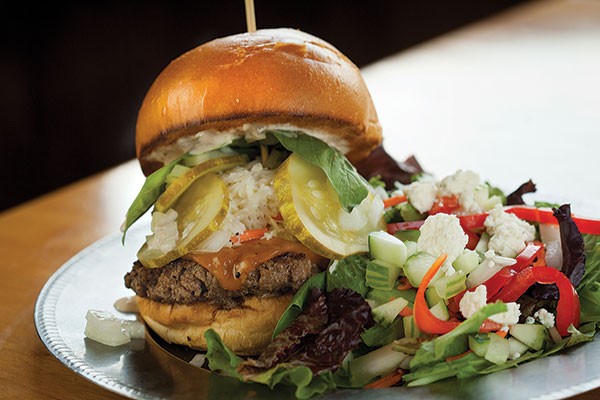 Back when fancy burger joints were the hot new thing, we heard there was a sizzlin' place up near Harmony. But with so many burger-centric establishments barely farther away than our backyard grill, that seemed like a long haul. Then, truth be told, we got to the point where we needed a break from burgers.

Well, we finally made it to Burgh'ers in Harmony, and it has resuscitated our appetite. Because, despite the name, Burgh'ers is so much more than above-average all-beef patties on buns. Firstly, it styles itself as an organic, farm-to-table restaurant, sourcing its ingredients from local farmers, foragers, distillers and brewers whenever possible. Secondly, its thoughtful selection of all-American sandwiches, burgers (including veggie and bison burgers), hot dogs and sides offers something for everyone. In fact, it seems a shame to narrowly define Burgh'ers as a "burger place." It has a legit cocktail program, too, and we noticed a second shift of customers arriving post-dinner on a Friday night.

Though located in a strip mall, Burgh'ers' decor has more in common with urban gastropubs than suburban sports bars, with rustic wall boards, photos by a local artist and a concrete bartop that was simultaneously sleek and industrial. An outdoor patio in the parking lot felt a lot more sophisticated than tailgating.

And, speaking of sophisticated: watermelon-tomato gazpacho. We were impressed, not just by the seasonality of this creation, but by its execution. The sweetness of the melon accentuated that of the tomatoes, while pungent onion and spicy jalapeño peppers cut short any tendency to taste like a Jolly Rancher.

Most items on the "small bites" list double as sides, so our party coordinated to try them all. Mac-and-cheese was creamy but bland, like a béchamel unsharpened by any sufficiently bold cheese. But our other side plates were winners: a solid mesclun salad, finely diced creamy coleslaw and shoestring-style rosemary fries that managed to hit several notes at once. Golden, fluffy fries intermingled with thinner, crispier ones, and the rosemary flavored every bite without making the potatoes taste like a Christmas tree.

It was hard to resist fish tacos (and the daily special of kangaroo tacos, whose place in the farm-to-table ethos we questioned), but we did try Southern-fried-chicken strips and fried pierogies. The chicken was absolutely superb, the white meat incredibly juicy, the crust lightly crisp and well seasoned. We were surprised that the pierogies were not sautéed in butter, but lightly deep-fried for a wrapper that was still pale, but crisp. The potatoes inside were creamy, and the accompanying local kraut was tangy and crunchy.

Despite its suburban coordinates, Burgh'ers names most of its predesigned "craft burgers" after city neighborhoods. There's the "Mexican War" with chilies and avocado, the "Polish Hill" with a pierogie, and so on; there's also a "Polamalu" with grilled pineapple. Build-your-own is also an option, with a happily broad array of toppings, cheeses and sauces. The patties themselves were big but not huge, and griddled. The result was not one of these massive, smoky beef bombs, but rather a team player with a tender texture and crisp edges. The bun was a step up from fast food — soft, with just a hint of crust.

A shorter list of craft hot dogs included a chili dog, more of that excellent kraut on a Reuben dog and an "everything bagel dog," which required some clarification. It turned out to be served on a regular bun with a generous "schmear" of cream cheese, bacon, avocado and seeds sprinkled over all, evoking the bagel for which it was named. The wiener had a natural casing with lots of beefy flavor and the combination of ingredients was tasty, but overwhelmed by the too-thick slabs of cream cheese.

The sandwich portion of the menu had its own appeal, such as the chicken pita filled with basil, carrot, sweet pepper, onion, Swiss cheese and a sweet aioli. But Jason was craving the steak sandwich, packed with sweet grilled red pepper, piquant pickled onions, creamy smoked gouda, roasted chili and black-garlic aioli, all melded into a glorious hot mess. The only, and minor, hitch was that the chili was more or less a whole jalapeño smack in the middle of the sandwich, offering a lot more heat than Jason expected or the sandwich really needed.

Burgh'ers' superb quality across several styles of casual fare led us to a level of satisfaction that far exceeded the modest promise of "another burger place."