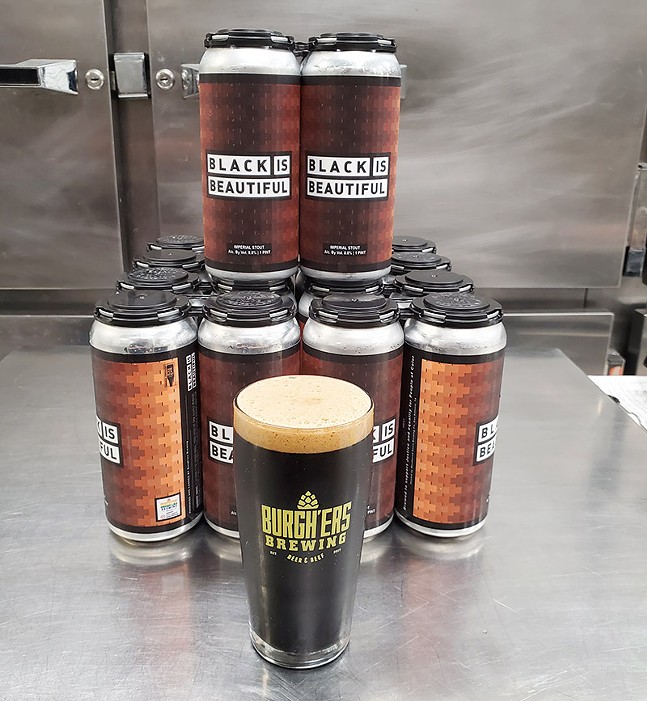 The first can debuts the brewery’s version of Black is Beautiful, a nationwide collaboration brew designed to bring awareness to the daily injustices faced by people of color and to raise funds for police reform and legal defenses. Similar to the All Together beer collaboration at the beginning of the pandemic, all of the Black is Beautiful brews are based off of the same recipe, this one created by Weathered Souls Brewing Company in Texas. The recipe is for a moderately high-alcohol (10% ABV) imperial stout, but breweries are welcome to add their own twists.

For its brew, Burgh’ers has added chocolate wheat, chocolate rye, and switched out some of the hops. Neil Glausier, co-owner and brewmaster at Burgh’ers says the brew carries a “robust hop profile with mellow herbal bitterness and floral notes.” Burnt toffee, rich cocoa, and mellow caramel flavors come though the “velvety ganache” beer.

The second brew — a tropical, pineapple-forward, 7.0% ABV, hazy IPA called Palette — was crafted for Fresh Fest Digi Fest in collaboration with local artist C.B. Perry. Perry and Burgh’ers named the brew Palette to “illuminate the value and variety of difference in individuals.”

Weathered Souls asks that all proceeds of Black is Beautiful go to local foundations that support the collaboration’s cause. Burgh’ers — who is one of many local breweries participating in the Black is Beautiful effort — will donate its profits to the Urban League of Greater Pittsburgh, an organization whose mission is to “enable African Americans to secure economic self-reliance, parity and power, and civil rights.”

These releases also fall in line with the restaurant’s 10th anniversary. Burgh’ers has locations in both Lawrenceville and Zelienope, and the brewery has been open since 2017.

“We can’t think of a better anniversary gift to ourselves than a canning line or a better way to launch canned beers than in conjunction with the ‘Black is Beautiful’ initiative,” said Glausier in a press release.

Burgh’ers has plans to start canning its flagship beers next, and eventually hopes to expand to local distribution. Cans of Black is Beautiful and Palette are available for purchase at both locations while supplies last. Palette is on draft in Zelienople.

These beers will change how you think about low-alcohol brews