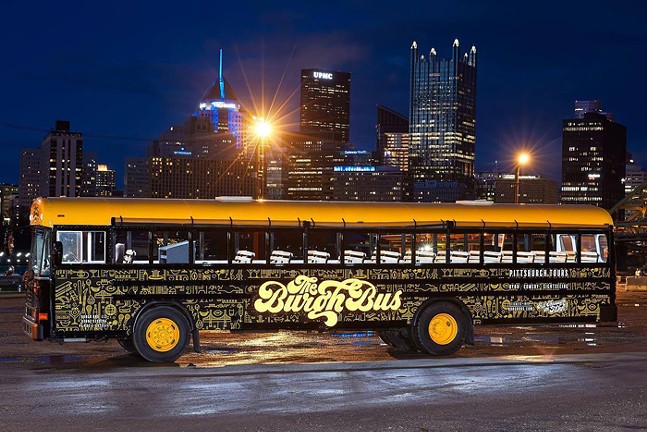 A new comedy club has come to Pittsburgh, but don't expect it to stay in one place.

The Burgh Bus is touted as Pittsburgh’s first and only comedy club on wheels. For 90 minutes, riders 21 and over can rent out the bus for a private event or use it as a limo service. The company also offers a regular schedule of 90-minute tours five days a week for which individual tickets can be purchased. Daytime tours are for ages 13 and up, and the Friday and Saturday night tours are for ages 18 and up.

Walker says he and his wife, Kat, always toyed with the idea of Burgh Bus and "saw the perfect chance" to launch it after the loss of Just Ducky Tours in Pittsburgh. The popular tours, which took visitors around the city on an amphibious vehicle, shut down in 2019 due to concerns over safety, according to an article by the Pittsburgh Post-Gazette at the time.

Painted black and yellow both inside and out, the Burgh Bus was made for the Steel City.

“The Bus was painted by a locally owned paint shop. Everyone who worked on this bus put time and effort into it so that it can have that Pittsburgh feel,” says Walker. “Pittsburgh deserves this, we deserve something new and outside of the box.”

Another interesting feature about the bus is that the windows were replaced with easy to open flaps so people taking the tour are able to "interact with people outside on the streets,” says Walker, adding, “That will make it fun for the people on the tour and it will make people on the outside want to do it as well.”

Walker says the goal of Burgh Bus is "to bring people to our city and show them what we are all about” in a unique way.

“The tour allows them to have fun, discover places, and have a good laugh, says Walker. "Having something that is one of a kind helps bring attention to a city because you can find it no place else.”

The Burgh Bus hopes that they are not the only business this year that thought outside of the box.

“If you have a creative idea you should go for it. Pittsburgh needs more outside of the box thinking,” says Walker “The more outside the box the better.”
Burgh Bus. Between 10th and 11th St. on Penn Ave., Downtown. burghbus.com

An insider’s guide to comedy open mics in Pittsburgh