The duo exhibition includes sculptures and installations by Selena Hurst and Derek Peel.

In a time when Americans have descended into a closet-clearing frenzy inspired by the Netflix series Tidying Up with Marie Kondo, their unwanted goods filling up thrift stores all over this great land, it seems like a perfect coincidence that Bunker Projects would debut its latest exhibition A Better Home and Garden.

Curated by Bunker Projects board member Emma Vescio, the exhibition (on view Feb. 1-24) challenges assumptions about how “objects exist, how physical spaces can be fabricated, and how we define and designate preciousness.” Featuring sculptures and installations by artists Selena Hurst and Derek Peel, Vescio describes the show as being inspired by the home decorating and remodeling magazine Better Homes and Gardens and all of the “ridiculous interior spaces that were created during the 1970s.”

“We’re taking all of the worst parts of those interior designs to kind of have a comment on consumerism and why do we keep all of these objects,” says Vescio. “Both Selena and Derek’s work are objects that at one point were functioning the way that they should have been and now are functioning in a different way.”

“The title of the show is more of a question because what we’re really talking about … is what makes a home or garden better?"

Hurst goes a bit further, saying, “The title of the show is more of a question because what we’re really talking about … is what makes a home or garden better? What is better in terms of a couch or a wall color? If you can sit on it and it is comfortable, is it not a good couch? That discrepancy is really interesting to me, because with [Better Homes and Gardens], if you saw that on your doorstep and you just look at it, it’s already assuming that your space is not as good as it could be, whatever that means.”

It ultimately comments on the temporary quality of home environments, and the way we discard furniture, appliances, and other household goods that are no longer fashionable or useful. Among the works is a soft sculpture chair by Hurst, created by photographing a chair, printing it out on fabric, and sewing it into a chair that serves its intended purpose, but isn’t durable enough to hold someone for a long period.

Also on view are sculptures by Peel that incorporate what they call “mostly household objects and either found or second-hand personal accessories and merchandise,” including broken or junked ceiling fans, lamps, and air conditioners. Peel describes the work they produced for the exhibit as “meant to illustrate sort of a psychosomatic or psychogenic response to stress by material surroundings.”

“There is tremendous pressure in our society to strive for trending definitions of perfection in our lifestyle,” says Peel. “For some people it’s impossible to keep up, and it takes a toll both physically and mentally. If you see your environment as a living thing, imagine if it internalized things like anxiety and frustration like people do. What kind of effects would that have?”

In a different way, Hurst knows firsthand the anxiety and frustration caused by living spaces, as she lost many of her belongings to a devastating house fire in 2017. 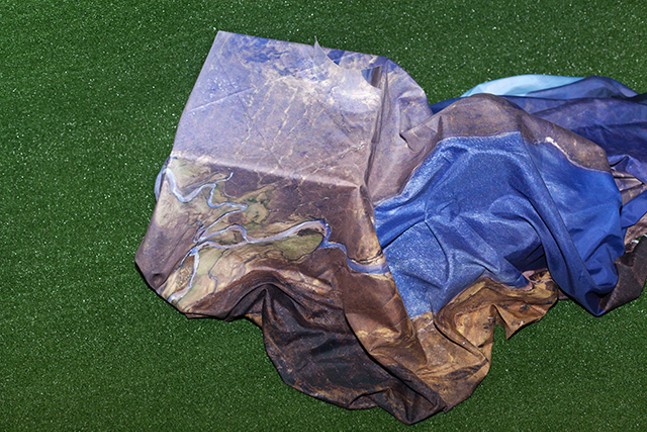 “Of course there is this trauma that comes with losing things and the danger of the situation, but also there’s that disillusionment that at any time something that you thought was safe and sound and stable could just break down,” says Hurst, adding that the experience informs much of her work.

Vescio believes the show’s message extends beyond any individual home to entire landscapes, including the one surrounding Bunker Projects.

“Pittsburgh’s changing so much, even within the last five years it looks completely different,” says Vescio. “Buildings and people in Garfield are constantly changing, and we’re thinking about that as well, how buildings … and people are just disregarded.”

But while A Better Home and Garden hits on serious topics, and even contains content that could be viewed as depressing, such as plants brought in to decay over the course of the exhibition, Vescio stresses its enjoyable aspects, including an interactive foam ball pit installation.

“It could be upsetting, but we’re doing it in a really playful way, where it’s not meant to make you angry, it’s meant to make it fun,” says Vescio.