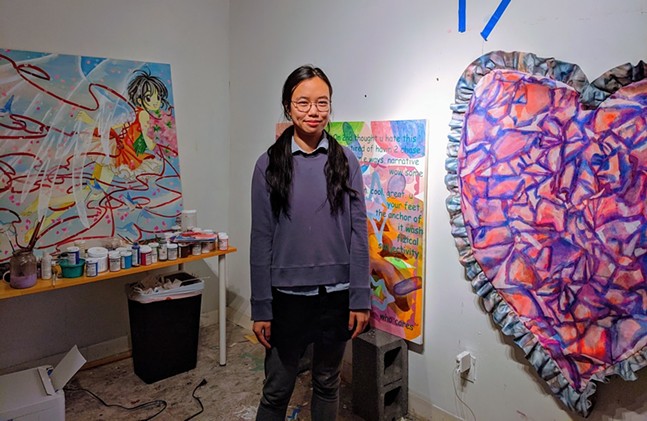 CP photo: Amanda Waltz
Bunker Projects artist-in-residence Veda Sun with work for her Lonely and Gorgeous Tears solo exhibition.
In a small studio at Bunker Projects, artist-in-residence Veda Sun stands among the new works for her first solo show exhibition, Lonely and Gorgeous Tears. If not for the messy, workshop-like surroundings, they might come off as high concept décor for a girl’s bedroom, with their ruffles, cartoonish imagery, and bright acrylic paint. And you better believe there’s glitter, so much in fact that some of it ended up getting accidentally sucked into the ventilation system and blown throughout Bunker’s gallery space (it’s been cleaned up, so don’t expect the aftermath of a glitter bomb).

But while Sun’s work may seem cute, perky, and, perhaps to some, superficial, with its soft forms and feminine-coded color palette, its dramatic title points to a deeper conversation about the solitary pursuit of art-making and how people experience art. The latter includes people dismissing certain styles of art for not being formal enough, something Sun admits to grappling with.

“I used to not work like this,” says Sun, a graduate of Carnegie Mellon University and current Brooklyn resident who spent two years studying traditional landscape painting at the China Academy of Art. “I didn’t want to work in this realm because I thought, ‘I want to be taken seriously, so I can’t be making colorful abstract works.’”

As a result, she believes Lonely and Gorgeous Tears – which opens today during the Garfield Unblurred gallery crawl at the off-site GBBN Architects location – combines her formal training with her unabashed exploration of our relationship with pop culture and kitsch.

One painting resembles a bad meme, its cryptic text written in much-maligned Comic Sans font as a teddy bear lounges on a background of round, comforting, candy-colored forms. Sun points out that the piece mashes two extremes of online culture, that of toxic internet trolls (the text begins with EDGLORD ENDING, a phrase referring to a notorious figure who deliberately posts offensive or upsetting content in online forums), and the escapist preciousness of cute animal videos.

“It’s this intersection of these two experiences,” says Sun.

When asked who contributed the text, she laughs awkwardly, adding that the person would, in true edgelord fashion, prefer to remain anonymous. “I feel like the person doesn’t want to be associated with this,” she says.

The show continues playing with widely held perceptions of good taste with pieces featuring elements like pixel art, a wide-eyed anime girl, and floating blue cherries. Sun also collaborated with fellow artist Nico Zevallos, who created sculptures for Lonely and Gorgeous Tears that combine the style of classical Greek and Roman statues with plastic fans. The sculptures will blow on wind chimes made by Sun, providing what she calls a soundtrack to her paintings.

Sun says she was interested in working with Zevallos because their work touches on the power of vulnerability and fragility, illustrated by pieces like her big, crinkly broken heart sculptural painting and his fascination with Catholicism and its images of suffering.

“We both explore this emotional terrain, but in very different ways,” says Sun. “I thought it would be interesting to see how it would look together.”

While Sun has heard her work described as hurried, rushed, scattered, and anxious, she views that stimulation as a way to draw the viewer into a space that embraces the freedom to be highly emotional and sentimental while also addressing important issues.

“I’m interested in engaging with the reality, to make something fun and colorful but also have a distance from it,” says Sun.