Bumpy Road Ahead?: At least one ride-share company plans to launch here this week, but how long it will be allowed to operate is another story | News | Pittsburgh | Pittsburgh City Paper

Bumpy Road Ahead?: At least one ride-share company plans to launch here this week, but how long it will be allowed to operate is another story

"Cities want us, and once we are there, we grow quickly." 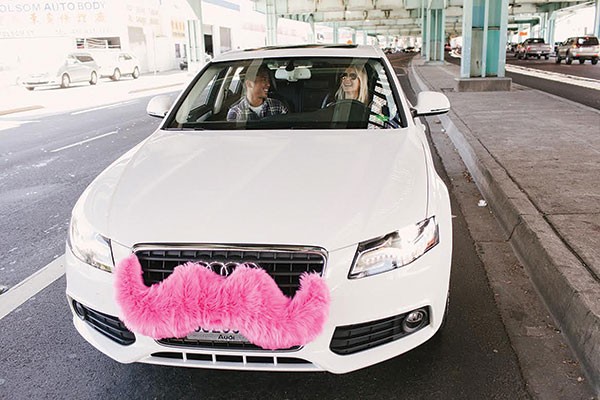 Ride-share company Lyft, and its pink-mustachioed vehicles, will launch in Pittsburgh Friday.

Its service may not yet be approved by state regulators, but ride-share company Lyft, with its pink-mustachioed fleet of cars, is apparently launching in the Steel City on Friday anyway.

It is, in some ways, a jackrabbit start for the company. Lyft and a competitor, Uber, have launched massive social-media campaigns and placed ads seeking drivers in recent weeks, stirring up local interest in the companies. When contacted by City Paper last week, however, neither company said it was sure when, or even if, they would launch. Then, as this issue was going to press late Monday, Lyft spokesperson Paige Thelen told CP via email that "we just confirmed the launch in Pittsburgh for this Friday, February 7."

Prior to that announcement, officials of the Pennsylvania Public Utilities Commission told CP that if the company begins offering rides, both the firm and its drivers could face sanctions. At the time, PUC spokeswoman Jennifer Kocher said the agency would classify the companies as "unlicensed providers."

"Anytime someone is transporting someone for any compensation, they would need a Certificate of Public Convenience," Kocher said. "This is whether it is for a set fare or [what] they call ... a donation."

As of late last week, Kocher said that the PUC knew Lyft was advertising for drivers in Pittsburgh, but that the company had not filed the appropriate paperwork to do business in the state. Obtaining the proper certificate is a hearing-based process, in which existing transportation companies have the right to raise objections.

And local firms seem almost certain to voice them. Jamie Campolongo, CEO of Pittsburgh Transportation Group, which includes Yellow Cab, says he has heard rumblings of Lyft and Uber coming to Pittsburgh and is gearing up for a fight.

"We will file a complaint with the PUC," Campolongo says. "We just want them to follow the rules. We could bury them if we just could do whatever we wanted, but we follow the law."

Lyft bills itself as a lower-cost alternative to taxis, linking drivers in their personal vehicles with passengers who pay a suggested donation for the ride, through a smartphone app, while the company takes a cut. Lyft's ads say drivers can make up to $20 per hour; some ads claim drivers can make $800 in a weekend.

While Lyft appears set to launch this week, Uber spokesperson Nairi Hourdajian says her company is in an "exploratory stage" here. Uber has listed openings for a Pittsburgh market community-manager position, which would be based in Washington, D.C., and an associate manager for Pittsburgh, to be based in Philadelphia.

"We think there is a tremendous opportunity in Pittsburgh," Hourdajian says. "It is an ideal market because there are lots of young people with all of the universities. Cities like Pittsburgh respond well because they have limited taxi service and limited public transit, especially away from the Downtown area."

Hourdajian tells City Paper that "tens of thousands" of people in the area have downloaded the company's app, and that many have even tried to use it.

But while customers have been responsive, ride-sharing has drawn the ire of regulators and taxi operators.

Part of UberBlack's business model, for example, is levying a surcharge for service during periods of peak demand. But Campolongo says state regulations bar taxis from charging different rates at certain times of day.

"If these companies want to apply for a taxi license, and follow the same regulations, I will compete with them," Campolongo adds. "But we need a level playing field."

The PUC's Kocher says the agency's position is clear: "Once we receive a report of [them] being operational, we would first send them a letter. The vast majority of time, companies bring themselves into compliance.

"If they do not, the next step would be fines, and there could be charges filed through the criminal-justice system," Kocher adds. Punishment could be directed at both the company and drivers.

Lyft declined to discuss legal questions, but their entrance into the Pittsburgh market seems similar to their arrival in other cities. 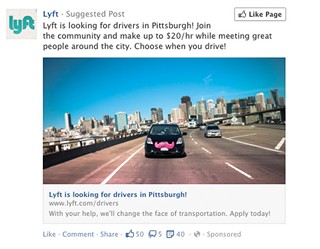 "We look forward to working with [local officials] as we've worked with other city and state regulators like the California Public Utilities Commission to protect public safety while allowing for innovation and consumer choice," Lyft's Thelen says.

The companies began operating in California in October 2012, and were immediately hit with cease-and-desist letters. But according to a Forbes magazine account, the CPUC voted unanimously to regulate the companies and allow them to operate as "transportation network companies," over the objections of taxi companies.

Lyft, Uber and another ride-sharing firm called Sidecar began operating in Seattle last year, though according to The Seattle Times, officials there have deemed the services to be operating illegally. New regulations for such services have been debated, but to date no legislation has been passed in Seattle, and the companies operating there are flourishing — again, over the objections of local cab companies.

Some of the debate has already played out in Philadelphia.

Uber legally operates an UberBlack service that uses an app to dispatch cars-for-hire there. (The company is also authorized to partner with other limo/black-car services across the state.) But when Sidecar launched its own ride-sharing service there last year, it was promptly shut down.

"When we became aware of them operating, we conducted a sting operation," says James Ney, director of the Taxicab and Limousine Division of the Philadelphia Parking Authority. "We issued stiff citations and impounded the vehicles."

Ney says Sidecar was fined for dispatching without a license; Sidecar drivers were charged with operating unauthorized taxis.

Kocher says unauthorized taxis pose public-safety concerns. She says the PUC's regulations ensure the cars are safe and clean and that the proper insurance is in place.

Alfred LaGasse, CEO of the Taxicab, Limousine & Paratransit Association, also says his group has concerns about these new companies.

"When you provide transportation for hire, there are standards that have been developed over the past couple of decades to minimize harm," LaGasse says. He adds that the companies might seem like hip start-ups, but their business model is nothing new.

"You call, get a ride and pay a fare," he says. "Clicking on an app is the same as dialing a number to have a taxi dispatched.

"I don't see how that is not a taxi company."

LaGasse and others have also raised issues with the ride-sharing companies' insurance practices. Lyft and UberX have drivers rely on their primary car insurance first, and then excess liability insurance kicks in. But the companies offer insurance only when there is a confirmed passenger from their network in the car.

According to the New York Daily News, an UberX driver looking for fares struck and killed a 6-year-old in San Francisco on New Year's Eve. The family filed a lawsuit against Uber last week; the company denies liability because the car had no passengers at the time.

Typically, he says, insurers "have the same language" and "exclude a covered vehicle when it is used to carry a person for a charge. I'd eat my hat if you found one without this exception."

Long says he would not insure a Lyft or UberX driver, and believes insurance companies here would aggressively fight claims arising from an incident involving a ride-share.

Uber and Lyft spokespersons would not respond to the insurance issue, except to say they believe they offer the coverage necessary under the law.

And Lyft's Thelen says that the demand for such services speaks for itself. When the company looks for new markets, she says, "We take into account the reliability of transportation in the city. Cities want us ... and once we are there we grow quickly."

Campolongo concedes that there might be times when it is hard to catch a taxi here, especially on Friday and Saturday nights. He says the city expands on the weekends and contracts on weekdays, making scheduling tricky.

He says Yellow Cab has heard the complaints and has taken action, adding 60 cabs last year, and planning to add another 60 to its 325-car fleet in 2014. But Campolongo says cab shortages are not unique to Pittsburgh.