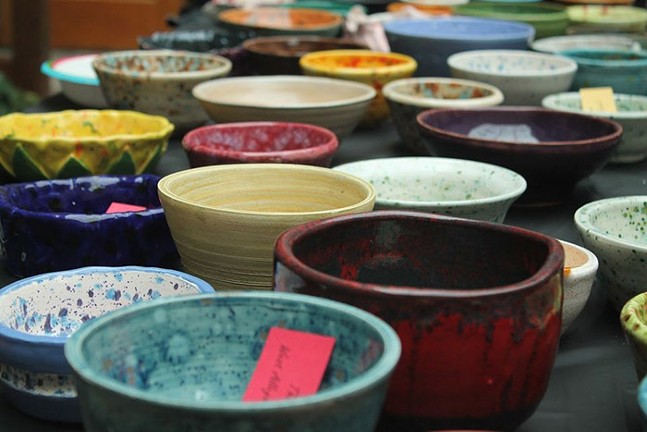 Apteka
4606 Penn Ave., Bloomfield. aptekapgh.com
Bloomfield's Apteka, a vegan Eastern European restaurant with two chefs who were just named James Beard seminfinalists, announced it's raising money to help the effort in Ukraine. On Wednesdays and Thursdays in March, Apteka will be donating a portion of dinner sales of pirozhki to groups helping to feed and house Ukrainian refugees in Poland. The pirozhki are available for take-out orders, come as an order of two, and are available in sauerkraut and mushroom, or potato and cabbage.

Brunch at the Ski Lodge
10 E. Sherman St., Millvale. gristhouse.com
Take your neon clothes out of storage. On Sat., March 26, Grist House is bringing back its popular party, Brunch at the Ski Lodge, for the first time since 2019. Expect a day full of food trucks, brunch cocktails, rare beers, fire pits, a new can release, and more. The event kicks off at noon.


Food Justice Learning PartyAssemble. 4824 Penn Ave., Garfield. assemblepgh.orgLearn about racial inequities in food systems and how people can work together as a community to make sure everyone has access to food security in a free Assemble Learning Party on Fri., March 18. Guests from the Garfield Community Farm, 412 Food Rescue, and others will teach attendees how to make seed bombs, build DIY planters, and more.


Mineo's Pizza House2128 Murray Ave., Squirrel Hill. mineospizza.comPopular Squirrel Hill pizza shop Mineo's has its own beer, thanks to a collaboration with Export's Helltown Brewing. As reported by TribLive, the hazy IPA has 6.7% alcohol and costs $18.50 for a six-pack of cans.


Spak Brothers Pizza and More5107 Penn Ave., Garfield. spakbrothers.comPittsburgh's favorite spot for seitan sandwiches is now available for online ordering via Uber Eats. Spak Brothers made the announcement on Instagram, posting that the restaurant has a "more expansive menu" than it has in its past delivering offerings.


Gluten Free Goat1020 N. Canal St., Sharpsburg. glutenfreegoat.comGluten-free Pittsburghers no longer have to be left out of Sunday brunches. Gluten Free Goat has kicked off weekly indoor Sunday brunch pop-ups, with new menus each week. Expect items like eggs and bacon, alongside gluten-free waffles and pancakes. Open every Sunday from 10 a.m.-2 p.m.

Have news about a Pittsburgh bar or restaurant? Send it to danijanae@pghcitypaper.com.