“I’m the most inspired when a lot of changes are going on in my life.”

For Pittsburgh singer-songwriter Brooke Annibale, being a musician is 20 percent writing, recording and performing, and 80 percent everything else.

The business of making art is just that — a business. There’s marketing and PR (talking to American Songwriter magazine, for instance, or to City Paper on her first “free” Saturday afternoon in months); pitching placements for TV shows and commercials (Annibale has had songs on Pretty Little Liars, One Tree Hill, Vampire Diaries and Hart of Dixie); juggling part-time jobs (programming playlists for the Big Burrito restaurants, among other music-related gigs); and then, of course, there’s all the touring.

Annibale drove 5,000 miles over seven weeks this fall, hitting up cities across the Northeast and Midwest in support of her fourth studio album, The Simple Fear, which she self-released in October. That meant 84 hours behind the wheel, completely alone, with only her guitar, Amy Poehler’s audiobook and podcasts by Tig Notaro and Alec Baldwin for company.

“So it felt really good to come home,” says the Moon, Pa. native, who spent six years living and making music in Nashville before moving back to Pittsburgh in the winter of 2014. 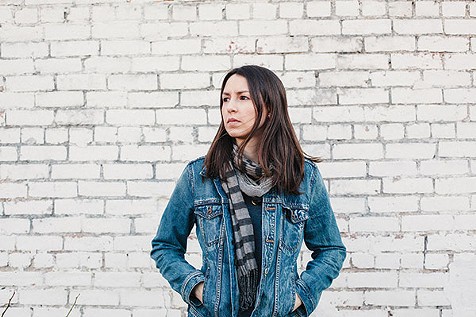 Annibale recorded The Simple Fear at Nashville’s Smokestack Studios with producer Justin March. She met him while working on a degree in music business at Belmont University, an institution whose alumni include Trisha Yearwood and Lee Ann Womack, as well as up-and-comers Brandy Clark and Torres. Stereogum has called The Simple Fear “cohesive and wise.” Paper calls the album a “gentle pick-me-up.” NPR and No Depression remark on Annibale’s knack for weaving “pretty” grace with intriguing “darkness.”

Her songs are apologies, promises and quiet pleas made in dark rooms. She questions faith, embraces sorrow and concedes, “It’s the things that scare me the most that I know I need.”

“I feel like I’m the most inspired when a lot of changes are going on in my life, and I’m figuring out how to process those changes and making a lot of decisions,” says Annibale, who wrote much of The Simple Life the winter she returned home. “I’ve talked to other writer friends about that and it’s like, do we have to be tortured to write good songs? It’s probably not entirely true. I think that sometimes you just have to get up and keep trying.”

Adele is good music for broken hearts, says Annibale, who — like any woman who sings with such sweet melancholy — has known her share of regret and longing. Every album ever created is a break-up album, I joke; Adele’s latest is a “make-up” album, muses Annibale, whose The Simple Fear feels similar, like a long goodbye to a once-great thing.

“Tell me where we go, what do we become, after all this time trying to be one,” she sings on “Decide,” which is as gut-wrenching as “Alright” is affirming, with its chorus of “If we love each other, honey, it’ll be alright,” a paean to the power of optimism.

“I started playing guitar so I could write songs, and it’s always been my outlet for processing whatever was happening in my life. For a long time, it’s been my really personal therapeutic process,” says Annibale. She grew up in a family of musicians, started songwriting in third grade, took her first guitar lesson at 14 and released her first album in high school. “I think that’s the job of a singer-songwriter, to be vulnerable.”

Annibale’s vulnerability is part of what makes her songs translate so beautifully to television — those moments when a character has a revelation, broods alone on a starry night or comes to terms with the past.

Her gift as a songwriter is in how she connects to the stories within herself, and within us all. She’s recently taken to using that gift to create gifts for others. Annibale teamed up with fellow Pittsburgh singer-songwriter Judith Avers for The Song Jar, a project where anyone can order a custom song, based on their personal story, for any occasion — a wedding, birthday, anniversary or simply “because.”

“Why do we make music?” asks Annibale. “To connect with people. And this is the ultimate way of connecting with people.”