Brittney Chantele's new album reflects on her time in the military, and how she got out | Music | Pittsburgh | Pittsburgh City Paper 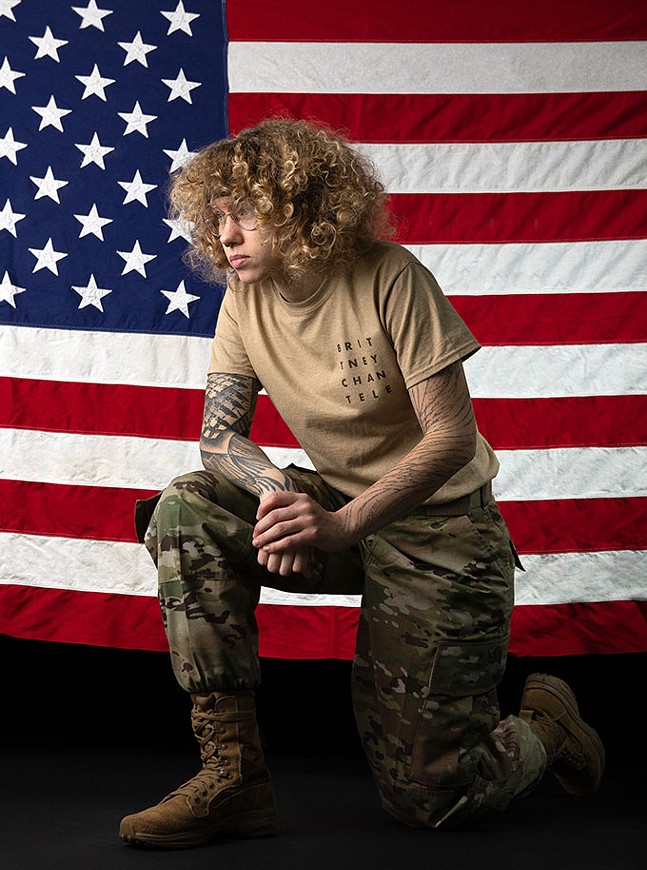 Brittney Chantele recalls the exact moment when her mindset about the military changed. Right around the end of 2012 — about a year and a half into her Army National Guard enlistment — Chantele was on a date. Throughout the evening, Chantele’s date noticed that she kept staring at one person, a man of Middle Eastern descent, and confronted her about it.

“I was like, ‘That’s a terrorist,’” Chantele remembers. “Like, I 100% believed that that person was one. She basically was like, ‘Fuck you, walk your ass home,’ and that’s exactly what I needed.”

The seven-mile walk home gave Chantele time to reflect. Later, Chantele and her date reconvened to chat about what happened.

“I’m really grateful for her playing that role because she didn’t have to be the one to educate me,” says Chantele. “It went from that issue to the environmental impact the military has, and then I kind of started doing my own research and my entire opinion and outlook flipped. I was like, ‘Fuck the military; I can’t do this anymore.’”

In the hip-hop artist’s third album, The Golden Opportunity, released on Monday with an accompanying release party Sat., Feb. 22 at Thunderbird Café & Music Hall, Chantele tells the tale of her military experience from joining Junior Reserve Officers' Training Corps (JROTC), to the emotional and sexual abuse she faced while serving, and her “golden opportunity” out, 10 years later. 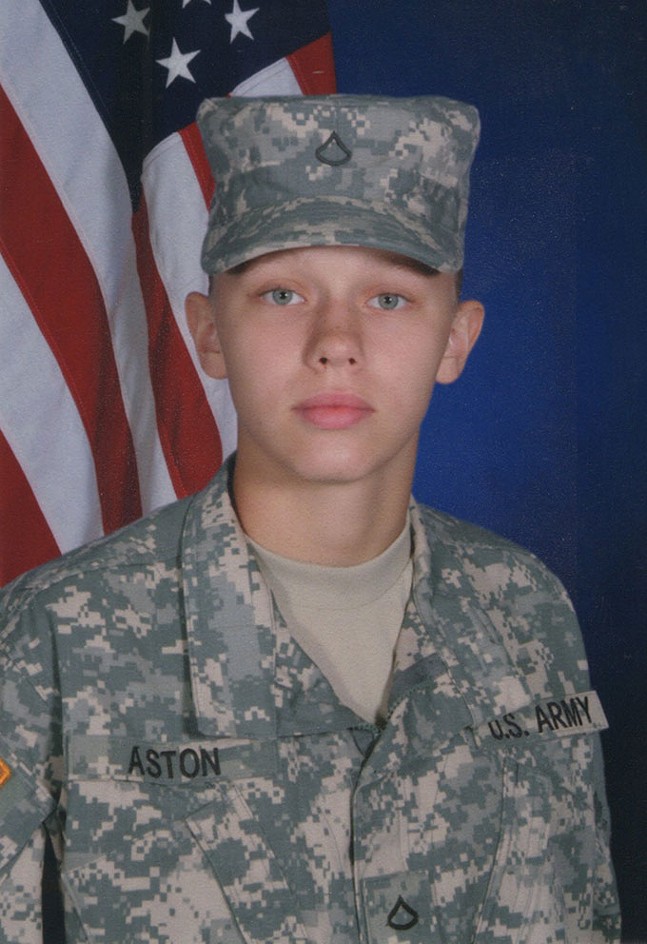 Rose-Colored Glasses
While Chantele comes from a military family and grew up listening to her dad sharing stories from his time serving, it wasn’t really an interest of hers until she began high school. Up until that point, Chantele played football. But once she started her freshman year, her parents wouldn’t allow her to do so anymore.

“They were worried I was going to get hurt, so at that point, I joined JROTC,” says Chantele. “And it was the one thing that I was good at. … When it came to ironing my uniform and shining my boots and knowing all the facts, I knew everything. The physical fitness part, I was good at too.”

On the second track of The Golden Opportunity, “J.R.O.T.C.” — which follows “Recruiters,” a song about government officials coming to schools and telling kids anything they want to hear — Chantele sing-raps, “Show me all the things that I prefer / turn me into her / turn me into someone you’d refer / tell me what’s the word.”

“It talks about how I had such rose-colored glasses on,” says Chantele. “All I was worried about was making sure my instructor thought I was the shit, like I only wanted to make him proud.”

During her time in JROTC, Chantele broke multiple records and became the commander of JROTC her junior year, a position typically reserved for seniors. Right after graduation, Chantele enlisted in the Army National Guard and 10 days later, she was at basic training in Fort Sill, Okla.

Signal Ignored
“Left right, kill / that didn’t feel right to me,” says Chantele in “Fort Sill (Basic Training)." “They don’t want me to be free / they just want blood in these streets.”

Only a short time into basic training, Chantele realized she didn’t feel right.

“JROTC, it’s brainwashing in a way that you don’t realize, that the camaraderie and the family that you built in JROTC is not that same as the real military,” explained Chantele. “They say it’s a brotherhood or sisterhood, everyone has your back, you can call the person on your left or the right any time of night, and they’ll be there for you. ... But for the things that happened to me to happen — sexual assault, homophobia, me witnessing xenophobia — all these different things, how are these people living up to these values?"

Then the incident with her date happened, and Chantele realized she needed to get out of the military. Shortly after, however, Chantele got word that her unit was up for deployment. Besides not wanting to fight overseas, Chantele would also get pulled out of college. So she made a very hasty decision and signed up to be a contracted ROTC Cadet because it meant that she could not be deployed.

“It was a power move that I did, but the thing is, that’s a contract extension,” she says.

Eight years were added onto Chantele’s contract, which would start when she graduated college. She wouldn’t be out of the military until 2023. 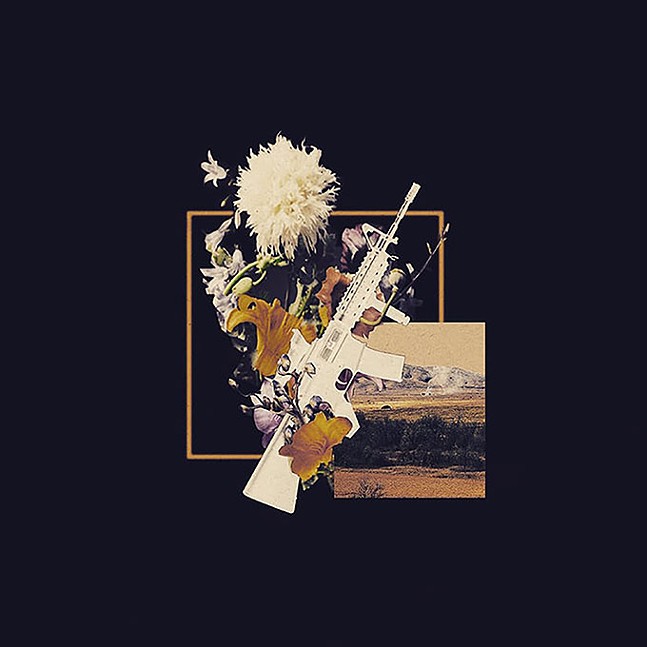 Golden Ticket
“Why can’t I fall asleep? I feel like I fell on my hands and knees / What have you done to me?” Chantele sings in “FibroMedicinal.”

Chantele always dealt with body pain, but in 2016, the pain became unbearable and started to take over her entire body. Chantele says this began right after she was sexually assaulted in Fort Worth, Va. She went to the military health clinic, was told she had leukemia, and was given a brown paper bag containing one muscle relaxer and six different pain pills.

“Pain pills in brown bags / I wish I didn’t know about that,” Chantele raps in “PTSD.” “Crying in the shower ’cause I’m wishing they could take it back.”

A week later, she went back and was told she had fibromyalgia. Its symptoms include widespread muscle pain, fatigue, and difficulties with sleep, memory, and mood.

“But then I was like, 'Wait a minute, this is my fucking ticket,'” says Chantele.

It took over a year, but in February 2017 Chantele submitted paperwork to be discharged from the military due to health issues. She got out in November 2018.

“It didn’t feel right to be like, 'It’s my fibromyalgia,' when it was that in addition to a whole bunch of other things,” says Chantele, but it was her way around the red tape.

Young Veteran
After college, Chantele began working with high schoolers through multiple organizations including Venture Outdoors, Assemble, and the Student Conservation Association. Without asking, there would always be at least one student who brought up wanting to join the military.

“The things that they were repeating to me from the recruiter were complete lies,” says Chantele, adding that it was things she remembered hearing herself.

“I was like ‘Oh my god, this is continuing,’ And to be 100, these were always Black students. I felt between a rock and a hard place. Not having rich parents to pay for your stuff. And when you hear you’re going to have free health care, college, job training that can be transferred to the civilian world nine times out of 10, and other opportunities like signing bonuses, sometimes they’ll give you a $10,000 signing bonus.”

Hearing this over time is what inspired Chantele to create The Golden Opportunity. She also came to realize talking about these issues, and sharing her experience, was a passion. 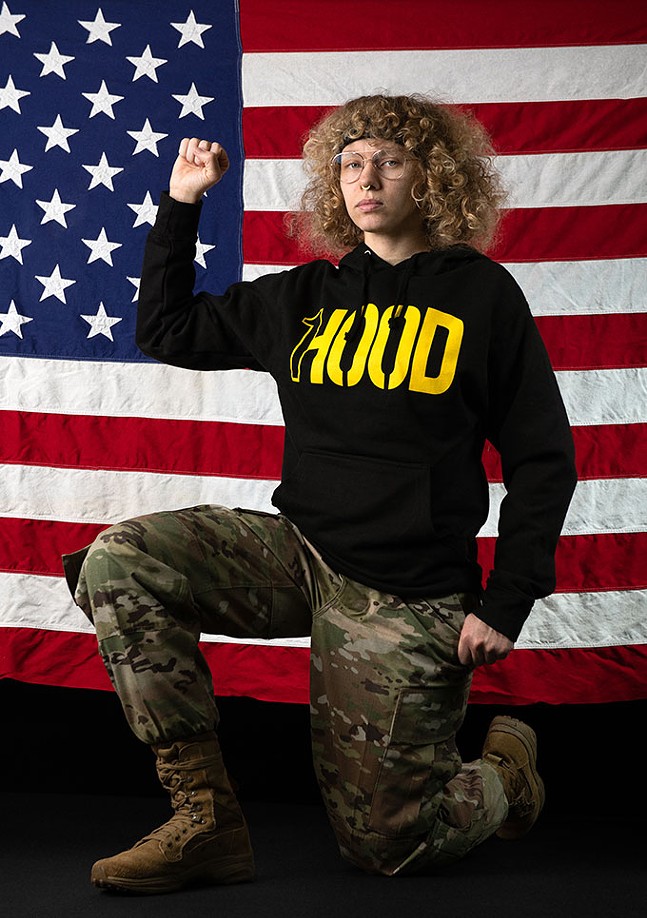 “Sharing my story is very important. I’m not here to tell people, ‘Don’t join.’ I want to make sure these students have an informed decision going in.”

In the early 1980s, the term “poverty draft” was coined to describe “the belief that the enlisted ranks of the military were made up of young people with limited economic opportunities,” according to Sojourners. In 2002, President George W. Bush signed the No Child Left Behind Act which allows military recruiters the same access in schools as college recruiters. In 2017, a poll from the Department of Defense cited 49% of teens in the survey said that if they were to join the military, future education payment would be one of the reasons they would do so.

“Keep in mind, I never deployed,” says Chantele. “There’s not enough younger veterans talking about this. … You’re being made into a completely different person, when you’re just getting on the road to finding yourself. You become desensitized to everything, you’re traumatized and don’t even realize it, and then you devolve this love for this thing that’s traumatizing you. What is this called? An abusive relationship.”