Bring the Beats Back 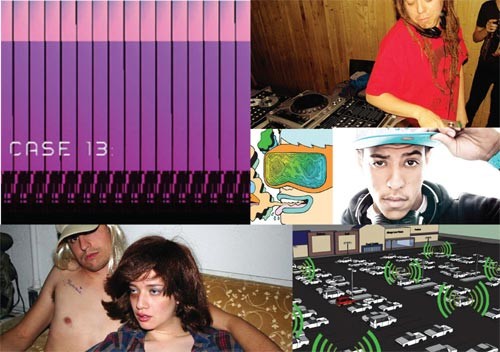 With any urban culture there is blurring and blending in the arts -- a certain sense that the rigidity of genres isn't quite what we think it is. Though Pittsburgh's musical landscape is small in numbers, it manages to thrive and cross-pollinate. Scene kids cross paths on their way to shows at Brillobox or Shadow Lounge, the Bloomfield Bridge Tavern or the Rex Theater.

Born from our small city's familial charm and its enduring inter-connectivity, the VIA Music and New Media Festival is taking place Oct. 5-9. Now in its second year, the event appears set to be bigger and deeper than last year's, which boasted just over 2,000 attendees between its music performances and educational workshops.

Avant-garde electronic instrumentation is a running theme throughout the festival lineup, though VIA's booking is not exactly bound by a genre.

The festival will be spread over multiple neighborhoods and venues. Changing up locations and highlighting different venues was a focus for VIA's monthly events throughout the past year as well. Boundary-pushing artists from around the world made stops in town to play little spaces like the Lawrenceville Moose and 720 Records, bringing a new awareness to the potential of certain spaces.

Events on Saturday and Sunday will take place on Broad Street in East Liberty between South Highland Avenue and Penn Circle. The choice of that site -- a previously vacant stretch of city street lined with renovated buildings -- plays into VIA's emphasis on community development through the arts. The organizers worked with East Liberty Development Inc. and the Urban Redevelopment Authority to secure the space.

"We're basically activating a street that has nothing going on on it," says Goshinski. "There are no businesses there right now and the vision for it is really strong."

"It was a derelict area," adds VIA co-founder Quinn Leonowicz. "When you drive around those areas you can tell they're pushing rejuvenation, you can see it, but we heard it. We were in these meetings and they were pushing us to do things in this space."

Rediscovery is another theme the team took into account in planning the events.

"Just like last year" Goshinski explains, "it is highlighting a space that is right in front of you that might have been forgotten." (Last year, VIA was held at a Strip District film studio, a space mostly unknown to the music scene.)

The VIA organizers' knowledge of the neighborhoods that they set up in -- and the role that they can play in redevelopment -- helps achieve their goal of a music and art experience that benefits Pittsburgh. While the festival is largely modeled on party-atmosphere festivals like Detroit's Movement, VIA is committed to providing an educational component as well.

There will be off-the-wall sound-play experiences like "Bass Rally II," in which cars parked within range of the "Bass Rally" vehicle can tap into its radio frequency. This will create a small-scale social experiment, as multiple cars play variations on the same sounds. Audio and visual workshops will explore electronic song-writing with VIA artist Wolf Eyes, and there will be an exploration of the video-sharing platform Vimeo in the workshop "Sloppy:Seconds."

But while all of the instructional elements are important, it's ultimately the music programming that will draw the crowds. Booking acts this year was motivated by several goals.

"One of the things is to try to establish some sort of link with the past, showing that even though a lot of these acts are new and doing something different, there is some precedent," says Matt McDermott, a VIA curatorial team member.

David Borden's FRKWYS 7 Ensemble is a performance slotted for Thu., Oct. 6, at CMU's Kresge Theater. VIA curator Edgar Um explains that "it's important to have a connection to a continuum of artists making music. David Borden has been making music since the mid-'60s, when he started the first all-synthesizer ensemble called Mother Mallard. FRKWYS 7 is a collaboration between Borden and all of these newer composers."

The VIA crew also landed an impressive and rare booking with the militantly underground Detroit techno group Underground Resistance Presents Interstellar Fugitives. The group is slotted to play Saturday with artists Ford & Lopatin and Laurel Halo. Daniel Lopatin and Halo are also part of the FRKWYS Ensemble, furthering that music-making continuum.

Organizers also made plenty of space available to local and Pittsburgh-related artists. Locals with a prominent place in the lineup include: Zombi, Centipede Eest, Pure Hype and a myriad of other audio and visual artists. Likewise, the unofficial headliner, Battles, has a local connection through guitarist Ian Williams, originally from Johnstown (and once a member of Don Caballero).

The literal meaning of the name "VIA" -- "by way of or passing through" -- connotes the organizers' take on Pittsburgh's role in the larger music scene, Goshinski says. It's a city, she explains, that many up-and-coming artists travel through, but one that is often neglected once an artist hits it big.

"I think Pittsburgh is a stopping point for people, and we'll give them the opportunity to come back."