James Curry gives the most fully realized performance by a "child" actor I've ever seen. 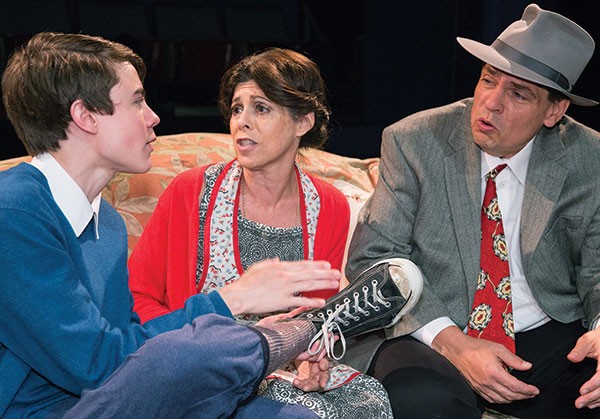 Say what you want about Neil Simon (and I have on several occasions): There's a reason he remains the most commercially successful playwright of all time. And no better explanation exists than the new production of Brighton Beach Memoirs at Little Lake Theatre.

This autobiographical play is the story of Eugene Morris, a teenager in Depression-era New York, and his awakening to the sexual, social and political landscape around him. For the first time, Eugene/Neil is beginning to understand how large and unknown the world is, and he's trying to figure out his place in it.

Eugene being Simon (and Simon being Simon), you know you're in for an evening of laughs. Less obvious, though more important, is the fact that Simon is a master of construction: This is a rock-solid vehicle built to take an audience on a theatrical journey. The argument can be (and has been) made that Simon's plays are too well-built, that craft is his substitute for artistry. That might or might not be true, but there's no denying the pleasure of watching an outstanding craftsman ply his outstanding craft.

That goes double for watching James Curry as Eugene at Little Lake. I like kids onstage as much as I like them off (which is to say not at all), and when I read his bio and learned that a 10th-grader was playing a role the size and substance of Eugene ... well, a long evening seemed to be on offer.

But after watching Curry at work, I'm willing to go out on a limb and say that he gives the most fully realized performance by a "child" actor I've ever seen: a complete creation filled with immediacy and honesty. Either that, or he actually is a 16-year-old New Yorker from 1937 who somehow finds his way to Little Lake every night.

But the brightest star of the evening is Curry, and shine he does.