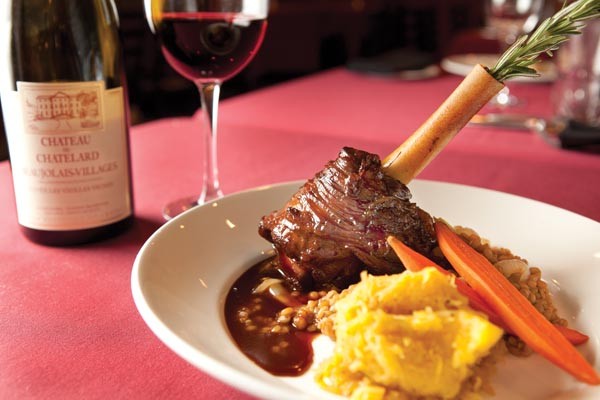 During the past decade, restaurants in Pittsburgh have reflected a broader trend in American dining: the glorification of the humble. The same culture that has popularized gourmet burgers and lobster mac-and-cheese has brought about a transition in French dining from haute cuisine to much more accessible crêperies and bistros offering street food and hearty peasant fare to diners who are, perhaps, less interested than their forbears in putting on airs (or a tie). We're all for blurring the lines between highbrow and low. And yet, inevitably, in this process something has been lost: the sense of French dining as the epitome of sophistication.

Local wine savant David DeSimone has attempted to recover some of that bygone elegance with his new venture, Bridge Ten Brasserie, in the South Side Holiday Inn. While the brasserie (literally: brewery) is not an inherently haute restaurant type, it is more upscale than a bistro. DeSimone has imbued this one with a sense of dining as event — complete with well-trained staff, lovingly curated wine list and a formal yet relaxed decor that balances reverential evocations of France with punches of exuberant color.

The menu is for the most part familiar, such as steak frites, escargot and cassoulet. These are foods that, whether rustic in origin or a bit more refined, mostly eschew elaborate sauces and persnickety preparations. What we found eye-catching, however, were the subtle inflections imparted by the chef, who makes the escargot in the style of Bourgogne and pizza in the style of Alsace. Even dishes with no obvious regional affiliation, such as cassoulet, reflect an individual vision: While bright, astringent tomato is a typical enlivener of this famously hearty stew, Bridge Ten's was pink with pureed tomatoes, an approach we'd never tasted before.

Something else new to us was crêpe au porc, essentially a crêpe wrapped around pulled pork and offered here as a starter. In the absence of barbecue smoke, the flavoring was a Calvados brandy sauce, which rendered the tenderly braised meat absolutely luscious. The crêpe was excellent, too.

The flavor of the escargot was defined first by Pernod butter and second by a profusion of fresh herbs, which created a profile much sweeter than the pungent garlic slurry in which snails are usually served. Initially, the departure from the taste we expected was bewildering, but we soon warmed to the tender morsels in their aromatic, pesto-like sauce.

A side of lentils braised with pork belly was one of the best dishes of the night. This hearty plate satisfied in just a few forkfuls, but offered enough depth of savor to be the centerpiece of the next day's lunch; indeed, this dish plus a vegetable or salad would make a superb dinner. We enjoyed it with haricots verts, straw-slender green beans served with creamy goat cheese, walnuts and a sweet-tart dressing of ver jus (the pressed juice of unripe grapes) and olive oil.

The very name of Alsatian Flammekueche suggests the mixed heritage of the region that, until recently, swapped nationalities every few decades. Like the lentils, this beautifully constructed flatbread hit the sweet spot between flavorful appetizer and satiating entrée, with a thin, crisp crust — more pastry than pizzeria style — topped with rich creme fraiche, sweet caramelized onions and more savory morsels of pork belly.

Only the aforementioned cassoulet fell short of magnifique. The issue wasn't the tomatoes, but rather the beans and confit duck, both of which seemed a bit underdone: The beans were al dente at best and the duck tough near the bone rather than unctuous. Perhaps this would be typical in France, but our American palates, accustomed to ingredients stewed into utter submission, registered objection.

This was not enough to diminish the pleasure of Bridge Ten Brasserie, which mines the rich core of sophistication in everyday French fare, prepared with distinction.