Steven Spielberg’s Bridge of Spies is a handsomely produced Cold War tale, “inspired by true events,” in which an

American lawyer negotiates an exchange of prisoners between then-adversaries the Soviet Union and the United States.

The story opens in 1957, with the arrest of a Brooklyn man, Rudolf Abel (Mark Rylance, of TV’s Wolf Hall). Abel is accused of being a Soviet spy, and a straight-shooting insurance attorney, Jim Donovan (Tom Hanks), is tapped to provide his defense. Abel is convicted, but Donovan fights the death penalty, arguing that Abel is more useful alive, particularly as a bargaining chip (“an insurance policy in our back pocket for when the storm comes”). Indeed, after the Soviets capture a U.S. pilot, Francis Gary Powers, the CIA approaches Donovan, asking him to negotiate a prisoner swap. 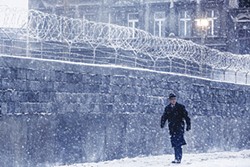 In from the cold: Jim Donovan (Tom Hanks) in Berlin

Thus, in 1960, Donovan winds up in Berlin, a fractured city in the process of being walled into two halves, an actual (and violent) border in the Cold War. There, Donovan will need his lawyering skills and more, as bargaining takes place between a variety of parties, some shadowy and all of them playing multiple hands.

Bridge is not quite a thriller, not quite a legal drama, but a straightforward re-telling that falls between engaging and stodgy. (Viewers unfamiliar with Cold War history may be bored by the long set-up, but will at least get a new-to-them resolution.) Lacking historical intrigue, its pleasures rest mostly on the capable shoulders of Hanks. The actor could play this upstanding moral-compass role in his sleep, but he does make the dependable Donovan a man to watch.

The most interesting part of the film is the relationship between Abel and Donovan — one, because it explores the respective commitments that anchor each man, and two, because Hanks and Rylance have the chops to sell their quiet conversations as entertainment. (The weakest scenes are the rote depictions of Donovan’s home life, where the capable Amy Ryan does what she can with “worried but supportive wife.”)

Available for more thoughtful viewers is an oblique critique of how the U.S. may have strayed from the noble ideals presented here. Donovan argues that adherence to the Constitution is what “makes us Americans,” and Bridge turns on an American high ideal — that even the worst person deserves a solid defense and to be treated with dignity. It’s easy to apply this retroactively to a feel-good tale about a long-vanquished enemy, if less so these days, with the never-ending extra-legal doings at Guantanamo and who even knows where.