This is an evening comprised of appetizers and feels incomplete. 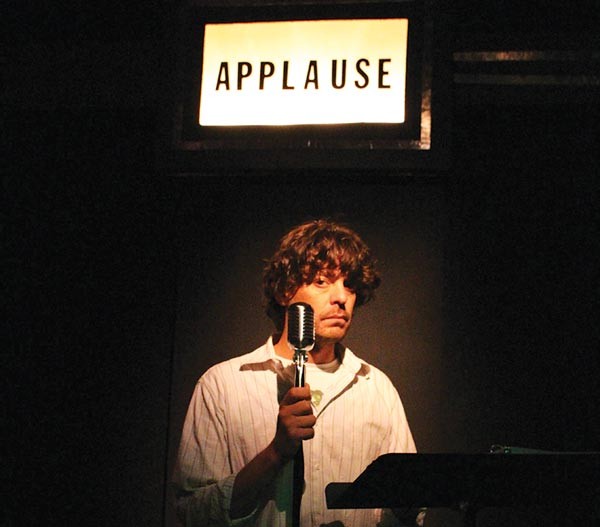 Back in ye olde Shakespearean times, there was something called "playing to the pit." Bricolage adds a whole new meaning with Shakesburgh, the first episode of the fifth season of the troupe's hugely popular "Midnight Radio" series.

Playing to the pit meant aiming less refined material to those in the cheap seats down front. With Shakesburgh, Bricolage is playing work by the Immortal Bard (as his wife used to call him) to the "Pit" — as in Pittsburgh — supposing what Macbeth and Romeo & Juliet would be like if set in modern Western Pa.

As with all Midnight Radio episodes, we're supposedly in a radio studio watching performers, musicians and sound artists broadcasting a show ... but in reality the event is a theatrical production.

Really, the whole thing is just a big comedic romp providing a clutch of actors the excuse to ham it up.

And speaking of ham, director Tami Dixon presides over a very porky five-member cast: Elena Alexandratos, Patrick Jordan, Maggie Ryan, Sam Turich and Jeffery Carpenter. There is some truly inspired comedy happening on stage, and every single one of them is rock-solid and committed completely to the material. Jason Coll is on hand providing musical background and several fun characters himself, and the amusing multimedia designs are from Andrew J. Paul.

The evening's strongest piece is "Romeo and Juliet of Verona, PA" – replete with all the chipped ham, PennDOT, Steelers and yinzer jokes you'd expect. Jordan and Ryan are especially funny as the star-crossed lovers: "I'd give up all the fries I ever had on a salad just to be with you!"

The other Midnight Radio episodes I've seen all featured one "main course" segment augmented with jokey skits and scenes. Shakesburgh doesn't ... and I have to say I missed it. This is an evening comprised of appetizers and feels incomplete. And, to go back to my opening remark — the humor never rises particularly high. It's not bad, certainly, but the jokes are by-the-number and the targets are obvious and easy. Jokes about Primanti's?

Yeah, you'll get a laugh in Pittsburgh — but there are such things as wit, irony and satire ...  n'at.