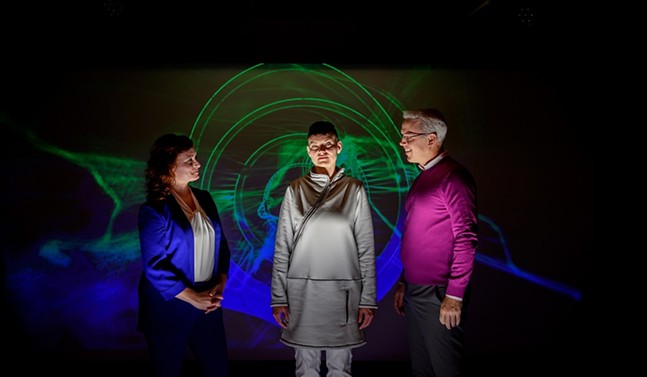 Photo: Jeff Swensen
Project Amelia
Anyone who’s ever attended a tech conference has experienced the contrived exuberance for the future of innovation, the glad-handing of potential investors, and the humblebrags from startup heads who see themselves as the next Steve Jobs. Now imagine that behind the Apple store slickness and overly-rehearsed talks are players engaged in a cloak-and-dagger game of clandestine meetings and secret, MacGuffin-esque files. Bricolage delivers just that with Project Amelia, a tech-inspired mystery positioned as the Pittsburgh-based immersive theater company’s most ambitious production to date.

Set in an undisclosed South Side space (the location wasn’t revealed until the day before the show), Project Amelia requires a little preliminary work. Days before, I received an email from Bo Brunfeld, the fictional director of communications for the show's fictional tech company, Aura, inviting me to register on an online portal. When I finally arrived at the location, I was outfitted with an RFID bracelet and given a smartphone device with my pre-loaded profile and two chat groups, a private one and an open one.

You’re assigned a role — in this case, I was appropriately cast as a member of the press along with several others, who were all signed into my private group chat. There are also board members, influencers, VIPs, and others, all with different tasks and privy to different information. My fellow press members and I watched an introductory video in a private room (ours was for the wrong group, but this was opening night, so kinks are to be expected) before the wall opened to reveal The Sandbox, a series of interactive games accessible with a tap of your RFID bracelet.

Written and conceived by Michael Skirpan, and created in partnership with the coding and ethical design studio Probable Models, the show really captures the shiny, happy façade of the tech world, something Pittsburgh is becoming more familiar with as a growing startup and robotics hub. Speeches contain plenty of tech industry jargon as engineers scurry about trying to fix glitches. And it all leads up to the big reveal — Amelia, a life-like android designed with voice-activation, privacy safeguards, and machine learning, all to ensure a helper that totally won’t eventually rise up and kill you. Then things get weird, and your group is tasked with getting to the bottom of that weirdness while Aura tries to debut its latest questionable project to the world.

With The Sandbox being an obvious nod, the production takes on the feel of a sort-of open-world video game. Actors provide subtle hints and clues at what to look for and where to go, but otherwise, you’re free to figure out ways to steal documents, sneak into rooms, and collect clues from or influence other guests, with every choice dictating how the show ends.

Emily Willson, head of marketing for Bricolage, says there are seven different possible endings for Project Amelia. Those craving a variety of experiences can save their information for future shows and try for other endings, and even get handed different roles, all elements that add to the video game vibe.

Providing any more details would risk revealing too much and ruining any potential surprises. I will say that overall, Project Amelia makes for a clever, engaging night of entertainment while also tackling big ethical questions in a time when tech companies are selling our data, virtual assistants are listening to our conversations, and smart devices are controlling our homes.