"This is neither the world of dreams nor an affront to the bourgeoisie." 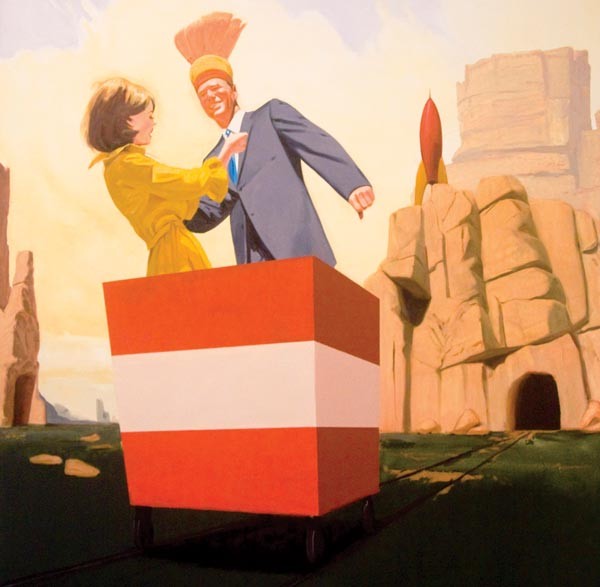 Brian Brown is a recent Carnegie Mellon Master of Fine Arts graduate who's been making a place for himself in Pittsburgh, appearing in group shows and creating a Sprout Fund mural on Commerce Street. And at 709 Penn Gallery, his show of seven paintings, tiny to large, presents the consistent illogic of his pastiches of pre-existing images.

Most of Brown's imagery seems appropriated from mid-century travel brochures, advertisements and other publicity materials. In "Girls Night," two women are being waited upon at a Hawaiian resort at dusk while ghouls invade the scene without disrupting it. While it taps into the deep roots of surrealism, this is neither the world of dreams nor an affront to the bourgeoisie; this is akin to the postmodern montage of Neo Rauch (featured in the 2004 Carnegie International). Clearly, the imagery is collapsed from disparate sources with inconsistencies of lighting, scale and perspective smoothed over by skilful but unfussy painting technique and classical compositions of balanced, stable forms sitting squarely within the canvas.

In "Commodore," a tourist and a beret-wearing accordionist observe a several-story-tall pink flamingo, generating a gentle friction of, possibly, mutant nature. The cumulative effect of the paintings is of the brightly colored, superficial cheeriness of glossy brochures, to which Brown has added an element of the ominous, though not the truly disturbing. In "Yes, Dear," a man in a gray flannel suit is having his lapels smoothed by a woman as they incongruously stand in a mine cart, along with a rocket/bomb pointing skyward.

Brown is too young for boomer nostalgia, and there's no artist's statement to help us out. My guess is that the artist sees the humungous Caddies, wrinkle-free slacks and leis on the beach as signifiers of an alluring optimism of prosperity and progress, but one that thinly concealed the dangers, oppressive roles and materialism of the postwar era. That the Happy Fifties re-emerged first as a Reaganite and more recently a Tea Party fantasy of pre-lapsarian grace ruined by '60s radicals gives these paintings a dose of political relevance. This adds a welcome complication to the exuberant visual pleasure of Brown's paintings, which show a particular finesse with color.

Meanwhile, "fantastic pants" veers in a slightly different direction. Its assertive incompleteness and use of patterning suggest that the plausible space of the other paintings here might be holding Brown back.