Punch Me Up to the Gods is a memoir that chronicles one Black man’s journey and his struggles with race, sexuality, addiction, and recovery. The author, Brian Broome, is a Black gay man who traveled from Ohio to Pittsburgh in the 1990s to find a sense of acceptance and community. The book expertly weaves stories from Ohio to Pittsburgh to Paris, following Broome as he navigates the negative Black stereotypes he was fed as a child in order to become his fully realized self. The memoir, set to release on Tue., May 18, has already received accolades from literary heavyweights including bestselling authors like Kiese Laymon (Heavy) and Augusten Burroughs (Running with Scissors), and has recently been listed as one of this month’s “Best New Books” by Entertainment Weekly, Apple Books, and editors of Amazon Books.

One of the early scenes in Broome’s book that struck me happens within the first 20 pages. We follow Broome as a boy and his antagonistic friend Corey. The relationship between the two is contentious as Corey is the opposite kind of boy as the author. Broome describes himself as reserved and often effeminate, whereas Corey plays more into the stereotypes of young masculinity. In the scene, the boys at school have been speculating that Broome might be gay, so Corey has put together a plan to prove that Broome is not, taking him to a barn where a girl awaits. The two are supposed to have a 10-year-old’s definition of sex.

As the scene unfolds, I felt concerned for both the girl and for Broome. They both have been forced into roles in that moment. The girl has been forced to be a receiver of the insecurities and desires of the boys that watch on. Broome has been forced into the role of a straight, Black, masculine male, a narrow identity he doesn’t fit.

“I have leaned on Black women a lot throughout my life and that is something that I want to stop doing,” Broome tells me over Zoom as we discuss the relationship between toxic masculinity and the treatment of Black women. “I don't know where we get this idea that Black women are, you know, these fonts of strength and wisdom. Black women are those things, but Black women are also vulnerable and need to have a kind word and things like that as well.”

One of the major themes in Broome’s book hinges on the world’s perception of Blackness, specifically Black masculinity. The book itself braids stories from Broome’s life in Pittsburgh, his life in Ohio, and an interaction on a bus between himself and a father-son duo. One of the book's first scenes is Broome observing this father and son: how, while waiting for a bus, the boy, named Tuan, injures himself and is encouraged by his father to not cry, to “be a man.”

The book also handles Broome’s journey to be comfortable with his sexuality, living as a Black gay man in America. When his college roommates forced him out of the closet, he moved back to his hometown of Warren, Ohio to wallow first, then begin to dream of a better, bigger place. That place seemed to be Pittsburgh. In one story from the book, Broome tells of his first Pride parade in the ’90s, describing how he walked along with a group of gays and lesbians in the pouring rain, staying on the outskirts to look like he wasn’t necessarily part of the group.

Readers watch Broome transform from the shy, fearful man in this scene to one that visits the Arena Health Club, a noted local gay hotspot. He goes from denying his sexuality when confronted by his roommates to being out at gay clubs and bars. He says how gay people, especially Black gay people, come to accept their sexuality has a lot to do with community and seeing other people be out and proud. 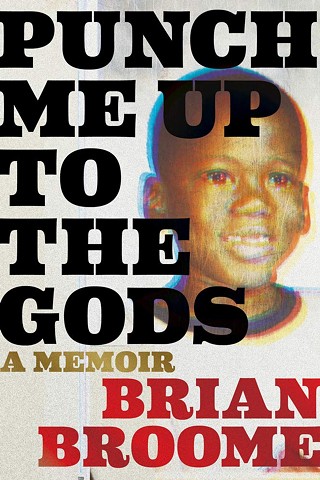 Punch Me Up to the Gods is structured around a Gwendolyn Brooks poem, “We Real Cool.” Speaking as a poet myself, I loved the use of Brooks’ poem — it serves as a guide for the reader and as a skeleton for the myriad of stories Broome tells. Broome, an instructor in the writing program at the University of Pitsburgh where he’s currently pursuing an MFA after graduating from CCAC and Chatham University, also discusses how he has been inspired by James Baldwin, the late author, intellectual, and Black gay icon. During his time in France, Broome visited Paris and Saint-Paul-de-Vence, where Baldwin lived after he left the United States. Broom says being able to connect to Baldwin and to himself in these towns was a crucial atmosphere for writing the book.

The book ends with a letter to the boy Tuan, a letter that hopes for a future that is free of the bonds of masculinity that the world tried to force onto Broome.

“I hope if the book actually lands in Tuan’s hands, that he already knows all of the stuff that I'm saying in the book,” says Broome. “I hope that he enjoys the book, but I hope that it has nothing to teach him because he's already self-actualized. I hope he finds good stories in the pages. I hope he finds stories that move in and make him laugh and make him cry. But I hope that the book is not a revelation. That he's already at a point in his life where he realized all the lessons that I'm trying to teach with these stories.”
Made Local with Brian Broome, in conversation with poet Yona Harvey. Tue., May 18. 7 p.m. (Video available for one month.) Free, with registration. pittsburghlectures.org