Photo: Aleem Hurst
“get well NOW” by Aleem Hurst
Entering the Brew House Association gallery two days after the election proved a much-needed respite from staring at my phone for hours, refreshing the slowly incoming results until my eyes blurred. I become immersed in the serenity of the space, the noise of my clothes rustling, and footsteps mixing with the quiet audio coming from artist J Houston's “scale of 1 to 10” installation.

The installation is part of Lost & Found, the latest exhibition at Brew House, and the long-time arts hub’s second since reopening. Curated by Taylor Fisch, the show features work by 10 artists, described in a statement as using their work to “lay bare the emotional weight of their losses and their desires to find themselves anew.”

Lost & Found — on view from Nov. 12 to Dec. 19 — also marks the first of two exhibitions presented as part of Prospectus, an emerging curator program described as recognizing the “vital role of curators in the arts industry” by providing gallery space, mentorship, professional development, and financial support.

Though incomplete (I was informed that Brendon J. Hawkins' video piece “My Shadow” had yet to be installed, as the artist was still tweaking it), Lost & Found resonates strongly, perhaps because of the particular moment during which I was viewing it. Writing about art does not happen in a vacuum, and that rings especially true given the show's stated mission, as well as each artist's attempt at understanding themselves by trying to preserve the “ephemerality” in their memories of the past, which manifests in a variety of highly evocative, often heartbreaking ways.

One theme that carries through the show is that of softness and comfort, starting with the whimsical marshmallows of Aleem Hurst's Invitation to Pretend series. The spongy treat appears in the inkjet print “put something in,” which depicts a young subject lying nearly naked and serene on the loft bed of a trailer, a pair of hands pouring multicolored marshmallows in their mouth from an open vent above.

The image, taken during a trip to Hurst's hometown in Michigan, re-imagines a time before they transitioned to using gender-neutral pronouns, exploring how the kitschy domesticity of their younger years — also portrayed in several other colorful prints — can coexist with their queer identity. This looms large, literally, in pastel-colored marshmallow sculptures, all suspended above “Port-A-Floor,” a piece that invites guests to step onto a beanbag-like mound covered with a fabric print of shag carpeting (before doing so, you must slip on a pair of the disposable booties provided by the gallery). 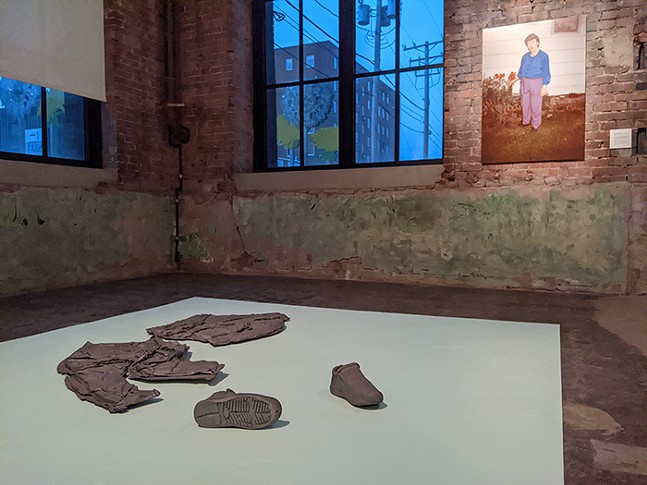 CP Photo: Amanda Waltz
“Her Shoes; Her Pants; Her Shirt and Her Mom” by Heidi Wiren Bartlett
Much like Hurst, Zachariah Szabo and Zeal Eva use photography to revisit the places and objects that represent a time before, acknowledging leaving them behind, while also accepting them as part of their identity. While similar in intent, the results could not be more different. Szabo creates a still-life from dated, 1980s décor reminiscent of his mother's style, while Eva chooses to capture the unmanipulated small-town scenes of Bethlehem, Pa., where she grew up and briefly returned to live.

But the softness and comforting familiarity bring with it the capacity to elicit strong emotions. This is especially true of Heidi Wiren Bartlett's “Her Shoes; Her Pants; Her Shirt,” a cast-iron sculptural work of the clothes the artist's mother wore when she died. Much like bronzing baby shoes, the items are all preserved forever in the state they were found, strewn across a garage floor. Overlooking the discarded clothing is a blown-up photograph of the mother, also forever preserved in what appears to be a candid moment, looking at the camera, her mouth open as if caught in mid-sentence.

In a year defined by loss, either of loved ones or friends, or of life as we know it, the sight of the mother's cushioned orthopedic shoes lying on the floor, as if tossed there for the last time, made my chest tighten.

That reaction stuck with me as I moved onto other works that, intentionally or not, speak to the pain of our collective reality. This includes the soft sculptures and textiles of Sheila Swartz, whose misshapen throw pillows and drapery incorporate unexpected elements like Scrabble tiles and fake grass. Also present are stray or unraveling threads and stains giving an overall sense that, despite the careful presentation, the items are ragged, frayed, and barely holding together. I know the feeling well, as I'm sure many others do.

CP Photo: Amanda Waltz
“Sacrament” by Sheila Swartz
This juxtaposition of calming and jarring continues in Houston's installation, a multimedia work exploring years of suffering as a chronically ill, transgender patient. Surrounded by clinical hospital blue walls and cushy playmats are photos and a video that are haunting in their straight-forward, lovingly-presented depictions of medical instruments, soiled bandages, and afflicted body parts associated with the slow process of healing.

Despite its heavy subjectivity, the show speaks to a universal yearning for community in the wake of COVID-19 and broken leadership. This comes through explicitly in Jameelah Platt's bold, large-scale collage work, “The Great Together,” as well as two excellent series by Hannah Altman and Brent Nakamoto, which heavily draw from their respective Jewish and Japanese identities and experiences.

But even as Lost & Found serves as a stark reminder of the things we have yet to, or will never recover, it also reinforces that we are not alone in this struggle. And that is, indeed, comforting.