Brew House artists are renovating their South Side home, but not changing their mission | News | Pittsburgh | Pittsburgh City Paper

Brew House artists are renovating their South Side home, but not changing their mission

"If we tried to avoid it or push against the need for renovations, that would be the end of the building." 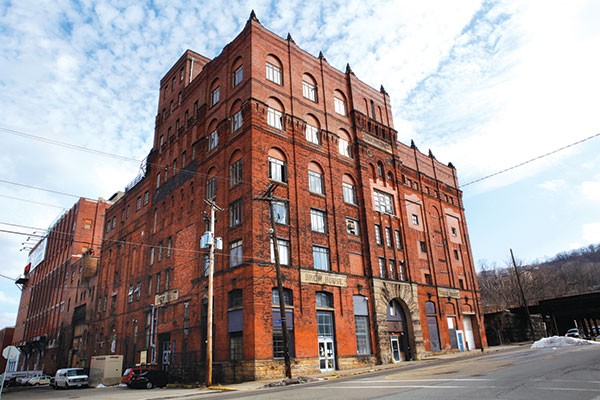 The South Side's landmark Duquesne Brewery has been part of the neighborhood's fabric for more than a century. And the Brew House Association — the collective whose members make, exhibit and promote varieties of art — has occupied the structure for more than two decades. But the South Side itself has been in constant flux ... and now change is penetrating even the brewery's 3-foot-thick walls.

The Association recently selected Downtown-based Trek Development to lead a renovation of the sprawling structure. That redevelopment will make use of essentially all the facility's 104,000 square feet — much of which has been idle for years. The project will expand the building's residential component dramatically, while helping the Brew House Association pursue its artistic mission in other spaces in the building.

Though the brewery now houses only about a dozen full-time residents, with several additional studios and businesses, plans are to reconfigure the structure to include 75 residential units, from studios to two-bedroom apartments. Meanwhile, the Brew House's program of providing space for exhibitions, non-residential studios and administrative offices will continue, and may be expanded. Architect Jody Schurman, whose firm Lab 8 Architects is working on the project with Clearscapes Architecture of Raleigh, N.C., says the Association will retain "tens of thousands of square feet" for those purposes.

Significant action was necessary. "The building has been falling apart, and it has become a liability for them," says Schurman, whose firm once had offices in the building.

Once Pennsylvania's largest brewery and home to the "Prince of Pilsner," Duquesne Brewery closed in 1972. But with ceilings ranging from 10 to 16 feet high, it offered a classic opportunity for artists to utilize an abandoned industrial structure at a low cost. A group of artists began working, and sometimes living, in the structure, and eventually organized as a formal cooperative in 1991.

Over the years, the Association expanded a series of ad hoc studio and living spaces in the building's upper floors, while making exhibition, administration and group workspaces available at street level. In 1995, the Association opened Space 101 as a regional exhibition and performance space, and welcomed visiting artists through a residency program. In 2001, the Association finally secured ownership of the building.

Maintenance was a perpetual challenge. At first, the tenants thought they could keep up the structure themselves. Indeed, recalls Chris Siefert, a resident in the early 1990s, group members "had to put in so many hours a month toward the cooperative end of things."

By some estimates, tenants made or subcontracted over $700,000 worth of improvements to the structure through a combination of sweat equity and grants. Still, only part of the Brew House was occupiable, and even that was more than the organization could handle. In 2009, the occupants were temporarily evicted by city inspectors for a variety of code violations.

"It's still kind of like the Wild West in there," says Trek President and CEO Bill Gatti.

In 2009, with funds from the Design Center, the Brew House Association funded a master plan to hire Lab 8 Architects to help determine the building's condition and future. The group also engaged Rick Belloli, of Civic Square consultants, to organize a selection process that culminated this year with the choice of a developer.

Trek proved to be the best fit. In projects such as the Overlook in Braddock and Dinwiddie Street Housing in the Hill, the firm has worked with nonprofits, produced multi-use projects and engaged with community constituencies.

Even with that track record, Gatti underscores the uniqueness of the Brew House project. "What attracts us to the building is the rawness, history and grit. Yet you have to bring it up to code, and it has to be safe. How do you capture the essence of that?"

Affordability is one issue. Last month, the Brew House Association announced that it had secured a $1.16 million grant from the Pennsylvania Housing Finance Agency. That "gets us about 75 percent of the way" to funding the project, says Gatti. It also stipulates that some units remain affordable, while terms of the project ensure the building's current tenants will have right of first refusal on the new units.

Still, rents are expected to rise from their current $375-to-$1,000 range to a bracket varying from roughly $600 to $1,600 a month. And the planned construction, which Gatti hopes to complete by the end of 2015, means that all current residents and tenants will have to move out, at least temporarily. While Trek and the Brew House Association are working to find a suitable spot for temporary relocation, Gatti allows that "I don't know if all of the tenants will want to come back."

The new units will be smaller (though the largest, at roughly 1,000 square feet, will still be large). And while Trek's Gatti says tenants will still be able to create paintings and other artwork, "You won't be able to blow glass or fire pots in these units."

Matt Gatto, a multi-media sculptor who currently lives and works in the space, laments, "It's going to change — not just the conditions, but the atmosphere will be different." But he acknowledges the tenuous condition of the facility. "If we tried to avoid it or push against it, that would be the end of the building."

And Brew House Association Board Chair Tim Kaulen emphasizes the upgrade will allow the group to refocus on creating and promoting works of art. The Association "has never been able to fully take on the building because of its size and needs," he says. But with a developer on board, Kaulen adds, the Association will be able to "spend much less time on the building and more pursuing the art-oriented goals of our mission."

The latest move toward development involves some trade-offs, but it underscores the longer-term successes of the Brew House.

After all, when the Brew House Association first formed, South Side was a rough-edged area shaking off post-industrial decline: Today, it's one of the city's more desirable neighborhoods.

As Kathryn Sitter, a former Association board member and previous executive director, puts it, "That's what happens in communities where you bring in artists to live and work: Over time, things improve."