Breaking fast for Ramadan at Salem's Market in the Strip District

In places with a larger Muslim population, restaurants may stay open all night 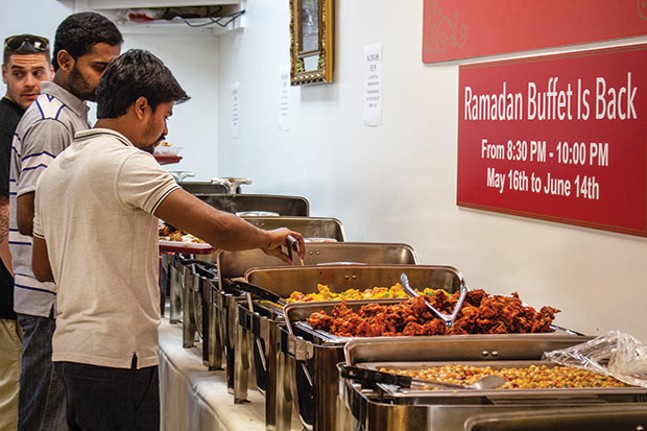 During Ramadan, devout Muslims eat a hearty breakfast before fasting from sunrise to sunset, but Abdullah Salem sticks to water.

His family business, Salem’s Market and Grill in the Strip District, accommodates thousands of hungry of Muslims in Pittsburgh as they break their fast each night. Being in the hot kitchen for hours weakens his appetite, so he focuses on hydrating for the long day of work.

Days during Ramadan are long for observant Muslims, especially those who run restaurants where devotees come to eat. In fact, Salem’s extends their evening hours from 8 p.m. to 10 p.m. in order to make sure everyone gets to eat [employees take a two hour break in the afternoon for a rest to account for the difference].

Ramadan is observed during the ninth month on the Islamic calendar and celebrates the time when the Qur'an was first revealed. One of the key parts of Ramadan for Muslims is fasting, known as sawm in Arabic.

Muslims believe sawm brings eternal rewards in the afterlife. Fasting is done purely in service to the divine.

Islam follows the lunar calendar, so Ramadan fasting lasts for 29 to 30 days from sunrise to sunset. During that time, nothing is allowed to pass the lips including water, medicine, food and cigarette smoke. Depending on the interpretation of the calendar, the end of the holiday is about a week away [anywhere from June 14 to 17].

Sunrise gets later each day of the month, so in order to eat breakfast Salem wakes up around four in the morning.

Suhoor is the breakfast meal before fasting begins and is often wholesome and heavy. Ful, an Egyptian dish of fava beans cooked with garlic, tahini and spices, is a common dish for suhoor. Another popular breakfast food is bread with cream and honey.

The evening meal is typically well-thought out since, well, there’s a lot of time to think about food.

Salem’s typically stockpiles around 50,000 samosas for Ramadan to sell; and as of print time, it had already run out. There is one full-time staff member whose only job is to roll samosas. Orders come in 200 or 300 at a time from individuals and mosques who host free dinners to break the fast through the season. Each dinner is sponsored by a community member or company. Anytime food is shared, the host of the meal receives a higher level of eternal reward for their kindness, so sponsoring dinners is very popular.

Breaking the fast each night begins with a date, water and milk before the evening prayer, called maghrib. Afterward, a larger meal of things like lamb, sweets and soups are prepared.

For Salem, Ramadan is a joyous community time.

“I wish it were twice a year! I feel great. You can see God’s wisdom in it,” he says.

If non-Muslims would like to join for breaking of the fast, The Islamic Center of Pittsburgh offers Humanity Day on Thu., June 7 at 7 p.m., and invites all community members to attend.