When did Star Wars stop being fun? 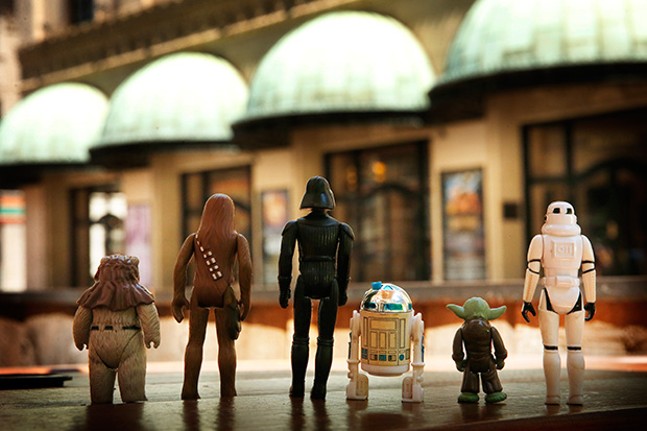 A long time ago in a galaxy far, far away … those words meant nothing. There was a time when Star Wars didn’t exist, when the names Obi-Wan and Leia meant nothing, when George Lucas was a young director who had failed to land filmmaking rights for his beloved Flash Gordon comic books.

It’s quite hard to imagine the world before Star Wars. In fact, many aren’t even old enough to remember life pre-Star Wars. The original Star Wars film, later subtitled A New Hope, was released just over 41 years ago. According to the CIA World Factbook, just 28.5 percent of Americans are younger than 55 years old, meaning a majority of us can’t remember life before lightsabers, stormtroopers, and Wookiees.

Age aside, it’s also quite difficult to imagine the world before Star Wars because it’s absolutely everywhere. It took a week shy of 28 years for the first six movies bearing the Star Wars name to be released.

By 2020, six films will have been released in six years. That will push the number of full-length Star Wars films to 13: the nine of the main saga, the three anthology films (Rogue One and Solo are the two others) and the animated Clone Wars movie.

The silver screen is far from the only place Star Wars lives. It’s everywhere, even that why-did-it-even-go-viral, not-funny-in-the-slightest, stop-sharing-on-Facebook-please video of a woman in a Chewbacca mask giggling hysterically.

Online, communities on reddit and Facebook have hundreds of thousands of members. They thrive on jokes and memes about everything from the end of net neutrality to a standalone Obi-Wan Kenobi movie starring Ewan McGregor.

On TV, we’ve had the Clone Wars micro-series and two 3D animated series, The Clone Wars and Rebels. A live-action series involving Jon Favreau is also in the works.

It wasn’t always like this. I remember the first time I watched Revenge of the Sith, the climactic film that would tie the prequels to the original trilogy. A friend of a childhood friend had somehow gotten his hands on a bootlegged DVD copy of the film before the release. Watching it, I was more hooked on Star Wars than ever.

Every fan has a story like that. But now, things don’t seem to be going too well.

The box office numbers for Solo, this year’s Star Wars entry (the fourth of six in that aforementioned one-every-year meat grinder), seem to reflect that. The film brought in just under $200 million at the domestic box office, but that’s the worst showing — by far — for a live-action Star Wars movie.

The next-worst Star Wars box office performance came from 2002’s Attack of the Clones, which brought in $310 million domestically (adjusted for inflation, that goes up to $429 million). And that movie’s “weak” performance came three years after The Phantom Menace was met with mixed critical and fan reactions for, among other reasons, overuse of computer-generated imagery and all-too-ironic toilet humor.

Because of Solo’s “failure,” Disney has decided to put further anthology films on the back burner until fans respond better. (Except the 2020 one, it seems, since it’s already in production.)

Some fans have responded in an even worse manner. They’re trying to remake The Last Jedi, the most recent entry to the sequel trilogy. Apparently, they’ve somehow managed to muster over $400 million in pledges. The internet sure is wonderful. Well, I’m sure it’ll go about as well as Anakin attacking Obi-Wan when the latter had the high ground.

But part of the problem these fans have with The Last Jedi has absolutely nothing to do with the actual movie. It has to do with everything leading up to it.

At the end of The Force Awakens, Rey returns Luke Skywalker’s old lightsaber to him. Fans spent two years theorizing about what he’d do, what he’d say. Maybe he’d train Rey, or turn out to be a Sith, or join up with her and Leia and Billy Dee Williams’ Lando Calrissian and the reanimated corpse of Darth Maul to fight emo crybaby baddies Kylo Ren and General Hux.

If you’ve seen The Last Jedi, though, you know what Luke does with his lightsaber: He nonchalantly tosses it over his shoulder and off a cliff.

Maybe that’s a sign of how Star Wars needs to be treated. After all, these are space movies with talking aliens, laser swords and planets that have exactly one climate. They’re not meant to have overwhelming gravitas or be perfect in every way.

Every Star Wars film has some imperfections: the song “Jedi Rocks” in Return of the Jedi, Luke’s “power convertors” line in A New Hope, basically all of Attack of the Clones.

But I’ll be damned if they aren’t fun. Lightsaber duels, podracing, Death Star explosions, our heroes inexplicably triumphing over the villains — things like that are why we all fell in love with Star Wars in the first place.

The Pittsburgh Symphony Orchestra will perform the music of Star Wars: A New Hope in time with the film on Thursday and Friday. Nothing could be more fun than that.

Imagine a world without Star Wars. I guarantee it’s not as fun, and that’s all that really matters.