“We really try to bring people together.”

While you might not hear about them on CNN, the United States has its own musical ambassadors, who expose people in other countries to American music, and aim to make cultural connections. And one such ambassador is Grammy-nominated bluegrass-folk band Della Mae.

As a part of the U.S. State Department’s American Music Abroad program, the group, formed in Boston and now based in Nashville, has played concerts in Pakistan, Kazakhstan and many other places around the world.

Della Mae has represented us well, too. Celia Woodsmith, lead singer, guitarist and one of the songwriters, says the group’s received comments like “I didn’t know Americans liked Pakistanis” and “Not all Americans are racists.” 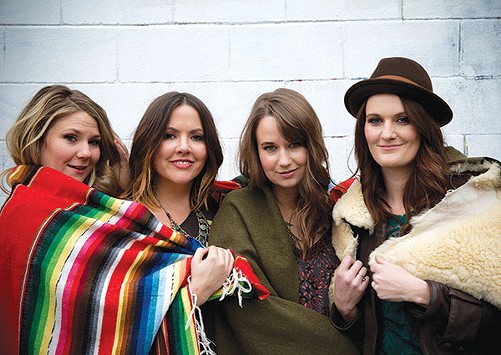 “We really try to bring people together,” she explains. “And we’ve played in areas that are a little trickier to play in.”

Although they sing in English, the members of Della Mae — who currently also include Kimber Ludiker (fiddle), Jenni Lyn Gardner (mandolin), Courtney Hartman (guitar and banjo) and Zoe Guigueno (bass) — can still get international crowds into the music. “I think [people] connect with the rhythm and the harmonies,” she says, noting that listeners typically associate musical major keys with happiness and minor keys with being sad, no matter where they live.

Along with its regular tour schedule, these State Department trips keep the group busy. “From the moment you wake up ... to the moment you’re on stage, mostly you’re going a mile a minute,” Woodsmith says. “You’re going so quickly that sometimes you can step onto the stage, but you really don’t know you’ve stepped onto the stage.”

Just as these women perform as diplomats for the U.S., others have served as unofficial ambassadors for them, trailblazing for equality in the musical world. Though Woodsmith still occasionally hears comments like “You play that well, for a girl,” but, overall, she thinks that this mentality is fading away.

“We’ve had so many women go before us that really have had to do the dirty work,” she says. “Women [who] have totally attacked [inequality] head on.”

That doesn’t mean that they shy from talking about these issues. In the song “Boston Town,” from the band’s latest self-titled record, they sing, “But a girl like me was worked to the bone / your fingers bled and your body moaned / 14 hours a day and then / my paycheck was half that of the men.”

But even with all Della Mae’s achievements — including three successful records — the members still experience occasional whispers of self-doubt. Woodsmith herself says that, for every song she writes, there are 20 more that she never wants to play for people. But, she adds, “For every success you have as a musician, there are ten other failures. If you let [doubt] hold you back, you’re not going to get anywhere.”