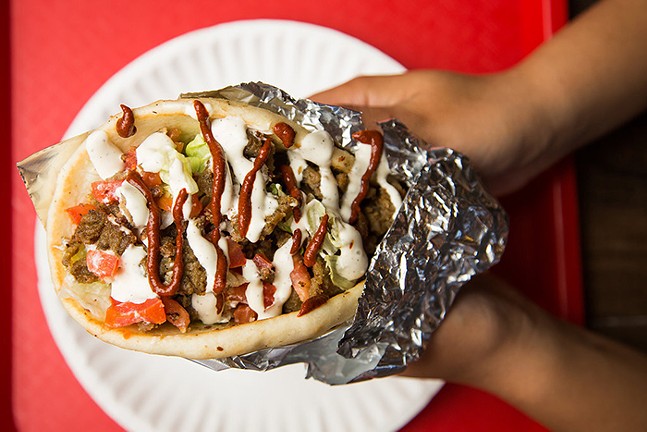 Photo: Courtesy of The Halal Guys
Gyro sandwich from The Halal Guys
Alta Via
PPG Place at Market Square, Downtown. altaviapgh.com
The Big Burrito Restaurant Group announced that it would expand its Fox Chapel Alta Via restaurant to a second location Downtown. The concept, described in a press release as "inspired by the fresh cuisine and active lifestyle of both California wine country and the lively mountain towns of the Italian Alps," will focus on handmade pasta and wood-fired roast chicken, steaks, and fresh fish, as well as a drink program with cocktails, and Italian and American wines. The Downtown restaurant is currently scheduled to open in early 2023 for lunch and dinner seven nights a week with brunch to follow.

CP photo: Jared WickerhaP
Alta Via
East End Brewing
147 Julius St., Larimer. eastendbrewing.com
East End Brewing is opening a second taproom in Mt. Lebanon. The new space will serve beer and food, like pizza and other snacks that have become popular through their East End Chewing endeavor. The location is set to open as soon as summer 2022.

B52
5202 Butler St., Lawrenceville. b52pgh.com
The folks over at B52 have added new items to their Grab & Go cooler: vegan cheeses from Conscious Cultures, a Philadelphia-based company that sells its product nationwide. Their cashew-based cheeses are 100% vegan and include a few unexpected varieties. The B52 Instagram account says they now carry Conscious Cultures' "decadent" Maverick, a cave-aged, double-creamed cashew cheese with a bloomy rind, and the Barn Cat, a "complex" cave-aged cashew cheese with a "vegetable ash inlay and bloomy ash rind."

Jak’s Bakery
4310 Main St., Bloomfield. jaksbakery.com
After three years of pop-up events and farmer’s markets, Bulgaria native Zhelyazko “Jak” Latinov will open his own bakery in Bloomfield, right near Trace Brewing. This bakery will feature Eastern European specialties and Bulgarian baked goods that Latinov grew up with. The bakery is set to open at the end of 2022.

Commonplace Coffee
5827 Forbes Ave., Squirrel Hill. commonplacecoffee.com
Commonplace is hosting the ultimate Pittsburgh foodie giveaway. Win a marble queen pothos from Cafe Con Migo Coffee, a tea sampler and cup from Tea Pigs, a hat and $50 gift card from Kingfly Spirits, and a bag of coffee and beanie from Commonplace, as well as t-shirts from Brothmonger. You can also win a tote bag and $20 gift card from White Whale Books and tickets to the Clairo show at the Roxian on March 2. Enter now or before Thu., Feb. 24 to win.

The Halal Guys
3621 Forbes Ave., Oakland. thehalalguys.com
The Halal Guys, a Manhattan-based franchise, is opening its Pittsburgh location on Sat., Feb. 26 from 11 a.m.-10 p.m. Described as growing from "humble beginnings as a food cart on the streets of New York City,"  the American Halal chain now operates nearly 100 locations within the United States and throughout the world. At The first ten guests in line for the opening event will get one free platter per month for a year, and there will be other prizes and vouchers handed out to the first 100 guests.

Caliente Pizza & Draft House
4624 Liberty Ave., Bloomfield. pizzadrafthouse.com
Caliente has announced a new menu for Lent that will begin on March 2. The menu will feature a Cajun Shrimp Pizza and a Fish on a Bun meal with fries. They also will have a 5-Cheese Pizza available, though it is not on the Lent menu.Have news about a Pittsburgh bar or restaurant? Send it to danijanae@pghcitypaper.com