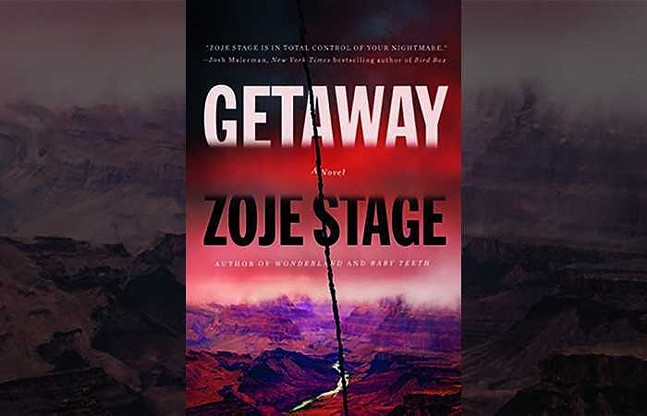 Getaway, the new novel by Pittsburgh author Zoje Stage, is a psychological thriller that puts its main characters and its readers in the heart of the Grand Canyon, a place described at once as an awe-inspiring beauty and a sharp death trap.

But while it takes place in the Grand Canyon, it draws on Stage's struggles to process the Tree of Life shooting, when, on Oct. 27, 2018, 11 congregants at a synagogue in the Squirrel Hill neighborhood of Pittsburgh were murdered in what was determined as an antisemitic hate crime.

Stage says she wrote this as the beginning scenes of her book as a way to process what had happened.

“Even now, if you go up to Squirrel Hill, there are still the crocheted stars of David hanging from trees and parking meters," says Stage. "And, you know, initially it was really hard to see that every day for weeks and months on end. I understand why they were there. Those were very respectful signs and people really supporting the community. But for me, it was kind of triggering to see that."

The novel follows our protagonist, Imogen, a writer who has fallen into a bit of a sophomore slump with her second novel. Imogen is called on by her sister, Beck, and estranged friend Tilda, for a trip to the Canyon after she survives a traumatic event.

Within the first pages of Getaway, I already found myself at a place of unease. The traumatic event that Imogen survives is essentially a fictionalized version of the Tree of Life shooting, and while there are moments that set it apart from the events that day, in general, it's described fairly closely to the tragedy.

Starting Getaway this way creates a problem for me as a reader. When creating a storyline based on a real event, you run the risk of reality clashing with the fiction you’ve created as a writer. The rest of the book, the fear it tries to create, the dread and terror, all pale in comparison to the real-life event on which it is based. I became trapped in the remembrance of Oct. 27, 2018, and couldn’t get out of it to really delve deep into the rest of the book.

The synopsis and teasers around the book mention that once Imogen, Beck, and Tilda get to the Canyon, they realize they are not alone. Wondering what they encountered is what drove me to get about halfway through the book where they encounter what’s been following them. Warning: If you don't want to know what comes next, buy the book before continuing forward because spoilers follow.

I was wondering, is it something supernatural? is it an ax murderer? is it a wild animal? All of these possibilities ran through my head until we meet the villain of the story, a man named Gale. Gale has been following the women for most of their trip. What seems like an encounter with a seemingly harmless but unwelcome guest becomes a full-on fight for their lives.

Gale, it is revealed, is on the run from the police after getting pulled over for a routine traffic stop and shooting the officer dead. Part of his motivation is avoiding going back to prison, the other is trying to see his daughter. He ends up in the Canyon on his way to her and so begins the deadly tug of war between him, Imogen, Beck, and Tilda.

Imogen, of all the women, seems to be the most sympathetic to Gale when she hears his story. Despite him constantly referring to Tilda as “the Mexican” and using homophobic slurs to refer to Beck, Imogen notes that the American criminal justice system eats people alive, and doesn’t leave room for them to be reformed, to change and grow.

Stage explains her approach to writing Gale as trying to make him more than a monster.

“My real pleasure in writing novels is having a character who is overtly evil, who seems like this is somebody that you can never have any sympathy for. And then trying to create them in a layered way so that you have these moments where like, ‘Oh, maybe this person isn't 100% evil,’” says Stage. “And just a different perspective than on what does that mean when we write someone off as being a certain way. If we knew them on a more intimate level would we think differently of them? And while I think Imogen does sometimes with the nature of her imagination and the way that she functions, she goes a little bit overboard in her trying to feel connected to him.”

I love a good, complex character. But something about Gale’s characterization didn’t sit right with me. Despite Imogen’s struggle to see him as human, he’s ultimately just a boogeyman the women encounter on their quest to become stronger selves. Maybe as a reader, I’m as naive as Imogen, who wants to see the humanity in someone, especially someone who’s been the victim of the criminal justice system. But every move Gale makes seems out of character with someone that doesn’t want to go back to prison. From shooting the cop to taking three women hostage, he categorically makes things worse for himself when he could have just done what he set out to do and visit his daughter and granddaughter.

Imogen, haunted by being a survivor of this shooting, is also traumatized by a secret she has kept for years. What she still refers to as “The Thing” is slowly revealed to be a sexual assault that occurred in college at the hands of Tilda’s boyfriend at the time. “The Thing” has stunned Imogen so much that she can’t even call it what it is until her sister, Beck, brings it up in the Canyon.

As a reader, I couldn’t help but wonder why the sexual assault wasn’t enough trauma for Imogen. Why did she have to be a survivor of a mass shooting as well as a victim of sexual assault? Was there any need to evoke the Tree of Life shooting if we are making Imogen a survivor of something else entirely?

It's true that people can survive multiple traumatic events in their lives, but I’ve found in novels and movies, it's common to put the female protagonist through hell to “toughen her up," to make her realize she is strong and capable. By the end, I was left me wondering how much of Imogen's suffering was necessary.

While I did have some issues finishing the book, I have to give Stage her flowers for the prose, especially as I neared the end of the novel. The final fight scene between Imogen and Gale is haunting and eerie. For a book that I thought had lost me, that scene really pulled me back in.

Stage says the scene still makes her skin crawl and considers it among the most unsettling things that happen in the book.

Getaway is, in part, about the evil that men do, and the victims they leave in their wake. That is a powerful and necessary thing to explore, as we see men in positions of power doing harm again and again, especially to women.

Getaway is definitely a thriller, but as Stage says, there are a lot of psychological games at play, especially having the women be with their captor for a large portion of the book. You’re left wondering when, and if, they will get free.

In the end, it reminded me of a horror movie, one I find myself struggling to sit with and wanting to fast forward through because of my discomfort. Stage is a talented writer who knows how to create a world, and I appreciate her adding complexity to her characters, but ultimately, I think the book gets stuck in the first few pages. Wanting to know what evils they will encounter spurns you to read further, but the villain of the Canyon is not as scary as the Canyon itself, or the real-life event the first few pages are based on.