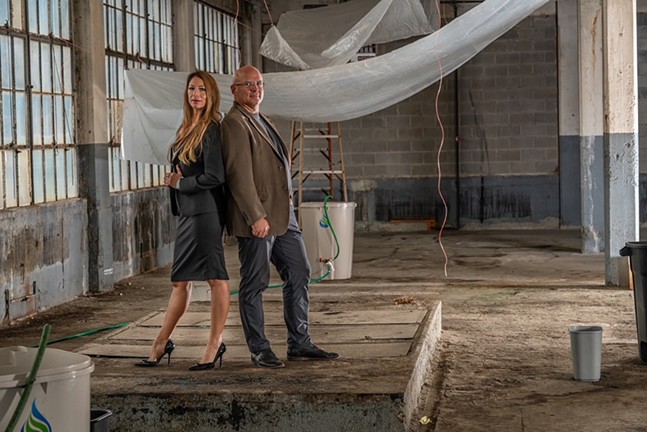 Photo: Joshua Sweeny
Maria Caruso (left) and David Colaizzi (right) at the future Movement Factory
A former bedding manufacturing facility in the North Side is being transformed into a dance studio and performance venue for local dance company, Bodiography.

Bodiography founder and artistic director Maria Caruso announced that her company is renovating the first floor of a building into Movement Factory, a space complete with a 175-seat theater, three studios, and more.

Caruso says Bodiography has been working on Movement Factory since the company unveiled the news during her solo performance of Metamorphosis in February 2020. She calls the 10,000-square-foot space, located along the Ohio River on 1501 Preble Avenue, the “dream of a lifetime.”

“We are excited to create a new physical space worthy of a conservatory and commercial dance for Pittsburgh and beyond,” says Caruso. “The remodel will transform the space into a more modern, open design, allowing the venue to be the cultural town hall of the North Shore for the 21st century.”

Movement Factory will be home to Caruso's production company, M-Train Productions, and her new publication, The Arts Inclusive, launching in 2021.
Caruso says that Movement Factory will work in tandem with Bodiography’s Squirrel Hill studios, with some minor alterations.

“I have been looking to expand in Squirrel Hill for about three years now, but I could not find ample space. Thus, my movement into the North Shore,” says Caruso, adding that the Bodiography Center for Movement will be running its regular programming, but will slightly downsize by one studio. “We are only giving up the storefront studio once we transition to usage of both spaces.”

Bodiography will work with general contractor Bridge City Builders and architects Bohlin Cywinski Jackson and Forty Eighty Architecture to design what Caruso calls “one of the most visually dramatic and welcoming live entertainment and performing arts education facilities in the city.”

Besides the theater and studios, Movement Factory will be home to the Bodiography Contemporary Ballet Company and La Roche University upper-classman dance students, who will use the space in the daytime hours for company class, rehearsals, and courses. In addition, freshmen and sophomore La Roche dance majors will be at the Center for Movement in Squirrel Hill for their daily coursework.

Other Movement Factory features include a lobby and reception area, on-site dormitories for undergraduate and graduate students, and a green rooftop space.

The renovation also extends to a “comprehensive streetscape plan” that will help “identify the new urban entertainment district on the North Shore.”

“This opportunity represents more than just restoring a building since this rejuvenation will also create economic impact on the immediate neighborhood by creating jobs and supporting the riverside ecosystem, and attract restaurants to complement existing commercial and retail establishments,” says Caruso.

Movement Factory is the result of a partnership between Bodiography, the City of Pittsburgh, and developer David Colaizzi, whose company Five Star Development is located on the fourth floor of the building.

Plans for Movement Factory are set to be finalized this fall and presented to the City of Pittsburgh for review and approval. Renovation work will begin later this year, and Caruso says that the space is slated for completion in time for the 2021-2022 season beginning in September 2021, with a soft opening planned for summer 2021.

Meet cute bats, parrots, and other animals during Tropical Paradise at the National Aviary