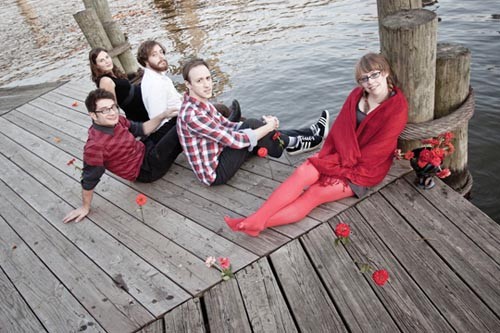 Black and white and red all over: Boca Chica (songwriter Hallie Pritts, at right)

When Boca Chica frontwoman Hallie Pritts talks about the sound of the local indie darlings, she does so like any artist, with an indifference toward categories. "We're more of an indie-country-rock band," she says with a shrug in her tone. "If that's a thing right now."

In the age of the "New Weird America," Boca Chica fits somewhere amid a range of acts tinged with flavors of folk music's past. The band's name has been mentioned in the company of Neil Young and The Decemberists: think indie charm meets old-school grit.

Boca Chica's most recent effort, Get Out of Sin City, is straightforward and familiar, with a slight twist on a sound the band has become known for, a sound generated and nurtured with Pritts' democratic guidance. "I write the songs pretty much by myself in my bedroom on an acoustic guitar and that sorta happens all at once," she explains. "I bring them to the band and we work together to arrange them."

The result provides a backbone to Pritts' lyrical strokes of pain and comfort, a synthesis of Wurlitzers, banjos and warm string sections. The song "Marlene" stands out as part of that New Weird American folk, that of Iron & Wine or Califone. It departs from the pop sound that coats the rest of songs and coaxes the most arresting vocal parts out of Pritts. Strings (arranged and performed by local string trio Cello Fury) and horns provide a layer of darkness to support her ghostly lyrics.

The track list is rounded out by two covers: "You're the Blues," a somber ballad written by local artist Nik Westman, and "Do Right Woman," an Aretha Franklin cover. Get Out of Sin City is distinctive free folk, playfully straddling the line between influences from the past and the modern-day genre pool.