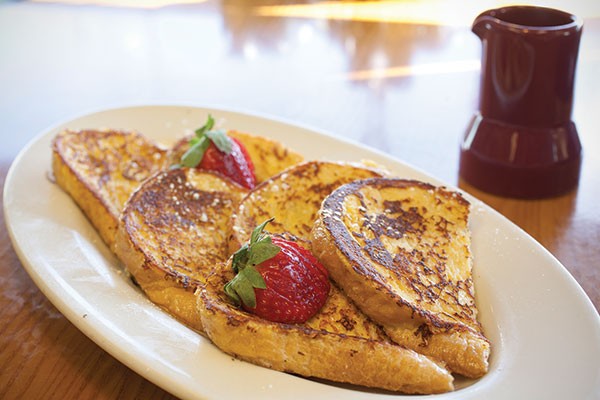 People like chain restaurants because they always know what to expect. Interestingly, though most diners are family-owned establishments, they offer a similarly comforting predictability — each an independent variation on a culturally consistent theme.

At a diner, you can be reasonably sure of sating any cravings for meatloaf, a burger, or pancakes for dinner — not to mention an inexpensive, bottomless, no-frills cup of coffee. The other kind of diner familiarity is more literal: Diners tend to attract a cast of regular customers who know the servers and vice versa.

West of the city, the three locations of Bob's Diner (with a fourth on the way) share menus and a sunny yellow-and-orange color scheme. Since the Carnegie location is the only one open for dinner, we stopped in one frigid evening for the warmth of some mutual familiarity. Sure enough, a server was chatting up some customers with the ease of a neighbor, and a second server quickly made us at home at our window-side booth.

Bob's Carnegie building is low-slung, set back from the main drag of Mansfield Boulevard behind a parking lot, and easily identifiable by the large-script "Diner" sign mounted on its front wall. In many ways, it's quintessential roadside architecture, perfectly synched to the heyday of diners themselves, but blessedly free of James-Dean-on-a-motorcycle posters and other '50s kitsch. Instead, a more idiosyncratic eye has seen fit to accessorize a sunburst mural, centered on a steaming cup of coffee, with the salvaged sign from a longtime Carnegie restaurant (since demolished for a drug store) and cartoon faces cut from swatches of printed fabric. It's just eclectic enough to be colorful, not so much as to feel cluttered.

Bob's serves the classic diner array of all-day breakfast fare, hot and cold sandwiches and stick-to-your-ribs dinner platters. While the menu makes some effort to identify local and homemade items — Mancini's bread, fresh burgers and the occasional recipe attributed to Bob Marshall, the diner's founder, in particular — there's no foodie pretension here. Our server cheerfully owned up that the excellent and homemade-seeming dumplings in the turkey soup were, in fact, frozen.

Batter-dipped for an order of French toast, the aforementioned Mancini's bread was well-griddled, leading to plenty of savory browning on the outside. Cinnamon-raisin and fruit-filled versions round out the French-toast offerings on the extensive breakfast menu. We also liked that the Belgian waffle wasn't merely an oversized version of the American style, but featured a rich, almost whole-wheaty chewiness inside a crisp, brown exterior. The fruit cup — with cantaloupe, banana and strawberries — served alongside was actually fresh and bright, not bruised and sad. A savory side of corned-beef hash included green pepper and onion, welcome additions that made up for less crust than Jason would prefer.

Bob's burger hit the diner highlights of griddle-toasted bun atop a well-browned patty. What took it to the next level was that the patty was generously sized (without being extreme) and the bun was more like a chewy roll than a fluffy round of American bread. The meat could have been a bit juicier, but hey, diners aren't in the business of asking how you want your burger done.

We ordered country-fried steak and fried chicken as dinner platters, although to our minds, they would work as well at breakfast and lunch respectively. Jason was initially taken aback that the steak gravy was brown, not white, but as diner gravy goes it was pretty good— especially on the accompanying fries, which were golden-crisp and fluffy. The steak itself was thick enough to withstand the coating, thin enough to be tender, and suitably crisp in the crust.

It paled, however, beside the crust of the fried chicken, which was a deep golden-brown and shatteringly crisp. The menu said it was "honey golden dipped," but we detected no sweetness; the menu also said we'd get three pieces, but it was actually a full, four-piece half-chicken. We were wowed.

Only Bob's own spaghetti sauce and meatballs was a disappointment. The sauce tasted more of ketchup than it did of canned tomatoes, and the meatballs alongside were no better than serviceable. At least Mancini garlic toast, flecked with bits of real, toasted garlic, was a winner.

But with our rate of success ordering from a menu as big as Bob's, we feel pretty good about getting familiar with this local diner.