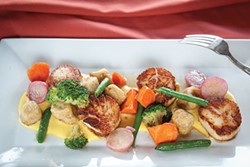 It’s been nearly 10 years since we first visited The Mighty Oak Barrel in Oakmont — now reopened under new management — to dine on its heady mixture of hometown charm and world-class food. And almost nine years ago, we journeyed to McCandless to eat at Blue, which sought to bring cocktail swankiness to the North Hills at a time when chains and red-sauce Italian still dominated.

Former Oak Barrel co-owner Grainne Trainor, who was the wine-focused half of the partnership, has now brought her sensibility and focus to Blue, rechristened Blue North, along with a menu that is evolving toward a slightly more eclectic feel and a new emphasis on comfort foods and updated American classics. Which isn’t to say that Blue North has moved away from sophisticated flavors and trendy ingredients: The signature burger is Wagyu beef on a pretzel bun with bleu cheese, candied bacon and cabernet ketchup.

But the first thing that caught Jason’s eye was Chesapeake fried oysters served with Bloody Mary dipping sauce and celery-seed slaw, an inspired recasting of flavors that played well together. The zesty, tomatoey sauce, effectively a twist on classic cocktail sauce, went splendidly with the succulent oysters and their crunchy yet light crust, though we did wish the morsel inside was a bit bigger. Meanwhile, the slaw skewed tartly vinegary, not sweet, a classic complement to seafood.

Speaking of timeless combinations, scallops wrapped in bacon manifests here as “Bubble and Squeal,” an adorable name for pan-seared scallops accompanied by strips of twice-baked pork belly. The scallops were perfectly tender, beautifully seared, and sweet to complement and contrast with the savory, pleasantly chewy pork. Smears of red and green curry sauces seemed more decorative than necessary to enhance either meat’s flavor, but a smattering of scallions and pickled, matchsticked vegetables brought lightness and brightness to their richness.

Our entrees continued to please, although a generous kitchen hand with the salt began to build and detract. In particular, Jason’s BBQ pork flatiron — a recent addition to the canon of beef cuts which we’ve never before seen applied to pork — was so salty that it needed to be balanced with the sides on the plate. The black-eyed-pea risotto cake and braised collards were both excellent, so this was no hardship, but there shouldn’t have been a problem taking bites of the meat by itself. But let’s circle back to that risotto cake, because it’s the kind of thing that can look good on paper but fail to deliver. Not here. The distinctive earthiness of the peas asserted themselves through the characteristic starchiness of the arborio rice, which bound them together within a crust that added a delightful, crunchy texture to contrast with the risotto’s creaminess. This part of the plate was a complete success and a perfect pairing with barbecue.

Honey-roasted duck risks being another of those dishes that appeals to Americans’ inveterate sweet tooth, but it didn’t turn out that way at Blue North. Instead the honey seemed present largely in order to deepen the color and raise the crispness of the skin, while adding just a touch of sweetness to the deboned duck thigh and its attached bone-in drumstick. It was meaty and succulent at the chef-recommended medium. The accompanying wild-grain pilaf studded with green beans and kernels of corn also turned out great, the variety of grains each at the right point of tender-firmness and all the flavors in harmony.

Angelique seriously considered ordering perhaps the quirkiest item on Blue North’s menu, the seafood hot dog. Our server explained that a mixture of scallops, shrimp and lobster is prepared and cased in-house, then served on a brioche bun with fennel relish, champagne mustard and potato chips. But at the last minute, Angelique veered to the other dish that spoke most dearly to her, a Moroccan-style lamb Bolognese. Warm spices such as cinnamon and cardamom successfully, yet subtly, inflected the ground lamb and tomato sauce with North African flavors, while lemon-olive tapenade brought complexity without an overly assertive olivey flavor. House-made pappardelle pasta was supple and substantial.

At last came roasted Eichner chicken with natural jus, potatoes Anna and “summer vegetables” (including carrots). The poultry was marvelously tender, moist and flavorful, and the cake of thinly sliced potatoes, simply salted, peppered and roasted, was another perfectly conceived and executed side.

Blue North marries the elegant feel of the former Blue with the everybody-knows-your-name appeal of Ms. Trainor’s previous success. It’s a winning combination.