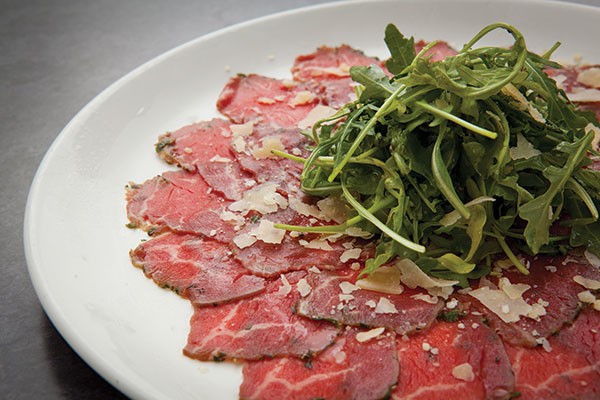 Blue Line Grille is named after markings on a hockey rink — features no doubt very familiar to part-owner Billy Guerin, who is also an ex-Penguin player and current front-office employee. (Fellow ex-Penguin player and current announcer Phil Borque is also listed on the restaurant's press release as a "marketing consultant.") The Grille sits directly across from the Consol Energy Center and features a big, hockey-themed mural as well as a banquet area called the Sin Bin, which is designed to look like a giant penalty box (complete with rink-style boards for walls). It's safe to say that this sports bar has a pretty clear mission: to draw in 'Burgh hockey enthusiasts for food, drink and the comradeship of fellow fans.

This plum location and all of these high-profile names could be squandered on a stock sports-bar menu dominated by hockey references and a few obligatory "specials" that aren't. But Blue Line has higher aspirations than that. OK, the hockey references are there in dishes such as "The Hat Trick" and "Pen Wings," but the menu is selective, offering variety through customization rather than lengthy lists of uninspired dishes. Poutine is enjoying a moment of popularity city- and perhaps nation-wide, but Montreal poutine, made with Canadian cheese curds, seemed extra-authentic in a restaurant themed around hockey. Quesadillas are ubiquitous, but chorizo and wild mushroom filling with scallion aioli isn't the usual rendition. And that Hat Trick? Three stuffed banana peppers, one each with shrimp, grilled veggies and chorizo. Scratch our backs with a hacksaw!

We started with blistered asparagus. Grilled until a bit of char developed, the tender, flavorful spears were served over a thick glaze of pomegranate balsamic vinegar, whose distinctly fruity tang cut the sweetness that too many kitchens treat as the dominant flavor of balsamic. This was a bar app worthy of a fine-dining restaurant.

Pretzel buns are another trendy item; Blue Line serves them with its signature smoked-paprika-and-garlic-smashed cheese. The buns were good and chewy, and although the crust was on the thin side, it had the distinctive tang of lye-dipped dough. The cheese, served in a bowl, had the zesty flavors and clumpy texture of a cheese ball; it begged to be spread and devoured.

Blue Line's house salad was also a cut above, with currants, gorgonzola and toasted pumpkin seeds boosting a bushel of tender spring greens. Best of all was the chef's special lemon-thyme dressing, a tartly herbal vinaigrette that we practically wanted to eat with a spoon.

These days, it's not unreasonable to expect pretty good pizza at bars, and Blue Line's chewy-crisp crust more than met our expectations. Where it stepped up its game was with a truly exceptional list of available toppings (divided into three "lines" at different price levels), including pulled chicken, a fried egg and Gulf shrimp. Choices for sauces included basil pesto and roasted-garlic butter; the latter offered plenty of rich, mellow garlic flavor, a welcome departure from by-the-book tomato sauce.

Jason was sorely tempted by "RJ's Pork Chop Whop Chop" sandwich — panko fried with shaved sweet onion — but our server's description of the sirloin, brisket and short-rib combo in the burger won his heart. But though the patty itself was juicy and delicious, with a good-quality bun, the Blue Line preparation, proclaimed a "Signature Item," didn't really deliver on its "blackened Cajun" promise. It basically tasted like an ordinary, albeit high-quality, burger with bleu cheese on top. This was a surprising failure from a kitchen that generally executed well.

Angelique, however, was well pleased with her "adulterated" grilled-cheese sandwich. The blend of sharp cheddar, nutty Swiss and tangy gorgonzola cheeses was bold and complex without overstepping the comforting bounds of the grilled-cheese genre, and the bread was substantial, toasty and not too greasy. Similarly, lobster spaezle — Blue Line's original take on now-close-to-cliched lobster mac-and-cheese — was mild yet rich, creamy and pleasantly lumpy. The sandwich's side of buffalo slaw, made with hot-sauce-spiked mayonnaise, was underwhelming, though.

Despite its blatant black-and-gold allegiance, Blue Line is more than just a sports bar. Going the extra mile extended beyond the menu: Our server was prompt and friendly, one of the bartenders plied his specialty in balloon art for child and adult diners alike, and the rooftop lounge is more nightclub than sports bar, with a dedicated menu that's mostly sushi and sashimi. The Pens' season might have ended prematurely this year, but that just provides us more opportunities to visit a hockey bar that offers so much more.