Bright lights, big boxes. Homestead is a place that begs the question: How did a town get to be on the wrong side of the tracks ... from itself? While traffic is always backed up heading into the shiny Waterfront development, precious few drivers break off to visit the game entrepreneurial efforts in the "old town" across the tracks. The latest attempt to straddle the line is right on the line: Blue Dust, a new bar on Amity Street, catty-corner from the old train station and a piece of pig iron's throw from Macy's and Dave & Buster's.

To the owners' credit, although "blue dust" is a reference to the steel industry that put Homestead on the map, the décor does not bank on nostalgia. The walls have murals of the mills that were, and yes, they are air-brushed in black on yellow. But trust us when we say the effect is a patina of remembrance, and not slavish Steeltown devotion to the past. The dining room is large and open, with a bar along one side and big windows facing both the street and the tracks (where, thankfully, the frequent trains make themselves known with horns, not a deafening rumble). Another wall is lined with richly stocked beer coolers, with flashlights provided for hunting up your favorite import or microbrew. One corner plays host to a comfy couch and a couple of throne-like antique chairs, but otherwise, the surroundings are laid-back.

As is the food, though we were pleased to note that the menu stretches beyond the usual pub grub, encompassing appetizers from nachos to rice and beans, sandwiches from smoked turkey to grilled portabella, and a few entrees, too.

The salad list was small but enticing, with original ingredients and creative combinations. We began with the Blue Dust salad, composed of mixed greens (locally grown, per the menu) tossed with blueberries, cranberries, bleu cheese, red onion and balsamic vinaigrette. While we expected the cranberries to be dried, we should have known that the blueberries would be, too, this being October and all. Still, the comparison between these chewy, vaguely blueberry-flavored nuggets and the imagined juicy deliciousness of summer's fresh berries was so disappointing, we would suggest this ingredient be included only in season. This aside, the rest of the salad was a supremely satisfying combination of sweet, tart, creamy and leafy flavors. With the addition of chicken or brisket -- a Blue Dust specialty whose praises we shall sing in a moment -- this salad would make a fine and tasty meal.

An appetizer of fried zucchini had a thin yet not-insubstantial batter that fried up light and crispy. A sprinkling of dill in the batter gave it a distinctive flavor which played nicely off the mildly vegetal notes of the zucchini itself. The temperature of the marinara dipping sauce -- straight from the refrigerator -- was the only distraction from an otherwise excellent appetizer.

Unable to decide between the crab cake and smoked brisket sandwiches, Jason was happy to discover that he could have it both ways: the Homestead Surf and Turf featured one-half of each. The crab cake was less a fried cake than a loose filling of crab, but the bun -- actually a thick hunk of Italian bread cleverly sliced to make the bottom crust into a hinge -- did a good job of corralling the free-form filling. Same with the brisket sandwich, which also included the traditional complements of provolone, lettuce, tomato, onion and a choice of horseradish or barbecue sauce. Jason went with the horseradish, and the hearty yet tender, smoky meat more than held up to it.

Of the four entrees on the menu -- pasta putanesca, pork chop, veggie stir-fry and crab-meat pasta -- Angelique chose the last. Consisting of crab meat sautéed in casino butter (butter combined with herbs and seasonings) over fresh pepper pasta, the dish was nevertheless elemental to the point of blandness. Neither the seasonings in the butter nor the pepper in the pasta made much of an imprint on the palate.

We were left with the impression that Blue Dust's entrees are attempts to appeal to the most diners with the fewest dishes. But with only four, we thought the kitchen could have paid more attention to making each one special. As our other dishes demonstrated, Blue Dust has the capacity to elevate ordinary recipes through small, creative touches with ingredients and preparations.

Finally, a dessert of homemade pumpkin pie called our names. The filling was velvety, sweet and autumnal, the crust flaky and above-average for a restaurant pie. It was a fitting ending to the best meal we've had in Homestead -- on either side of the tracks. 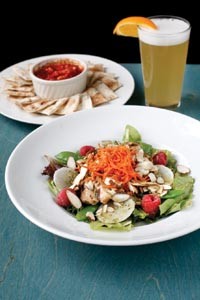