Bloomfield’s new Station offers its own twist on cocktails 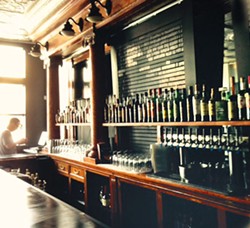 Photo by Celine Roberts
The bar at Station

On Aug. 1, Station opened its doors in the Bloomfield space once occupied by longtime local haunt D’Amico’s. An olive-oil-cured steel bar-top made by John Walter of Iron Eden sits just below the century-old, polished-wood backbar. It’s a perfect reflection of the establishment’s desire to appeal to all comers: New meets antique. Bar manager Chris Matrozza, formerly of Grit & Grace and 1947 Tavern, describes the space as “a transient place to meet other people with a train-station type of atmosphere.” The large front barroom certainly has the space for comings and goings, already hosting soon-to-be regulars and, recently, a Magic the Gathering-themed birthday party for chef Keith Fuller of Root 174. Clearly, this is a place that likes to have fun.

The beverage program also offers range, from canned beers and drafts to a wine list curated by Kris Lichtenberger, Level 1 sommelier at Altius. A small selection of carefully constructed cocktails completes the tableau. Matrozza also wants to provide a culinary take on the latter aspect. Using Karen Page and Andrew Dornenburg’s tome The Flavor Bible, Matrozza delves into flavor trinities and riffs on classics. Thus cocktails like the Zihuatanejo, based on the profile of strawberry, almond and cream cheese, results in a stylized flip, with the egg white standing in for the creamy component.

Each cocktail went through many taste tests to eliminate redundancy and keep a balance throughout the program. While a few patrons have asked that the cocktail list be expanded, Matrozza is adamant about maintaining quality over quantity. Cocktails have no more than four or five ingredients each, and syrups, shrubs and infusions are made in-house. He hopes that this focus will translate into a strong base from which he and his bartenders can learn and build. Do expect a happy hour and an expanded collection of amari and vermouths “because Little Italy,” says Matrozza. “First, though, we need to get numbers under our belt.”