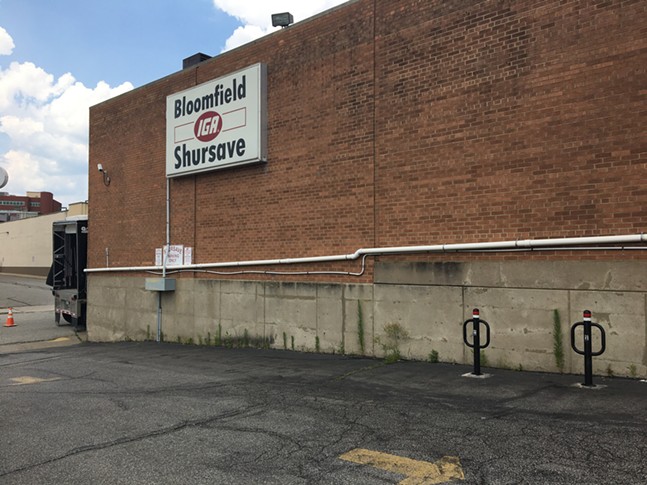 On July 6, ECHO Realty, the developing company that purchased the site of Shursave earlier this year, announced that Shursave would be closing by the end of July. In a press release, ECHO said that after Shursave closes, it will reopen as a Community Market store operated by Giant Eagle. (Shursave is currently operated by grocery chain IGA.)

According to the press release, Giant Eagle will work as the "interim operator" of the store, until ECHO Realty's "long-term site redevelopment plans are realized." So, Shursave will close in its current form, then reopen as a Community Market grocery store while the developers create a more concrete plan for what to do with the large property on the corner of Main Street and Liberty Avenue.

According to a news post on the Bloomfield Development Corporation's website, there is no set time for how long the grocery store will be dormant between when Shursave closes and when Community Market opens.

"There will be a period when the store will be closed while the changeover happens, and the length of the closure depends on what permits may be needed," the post explains.

Throughout the purchasing- and development-planning process of the Shursave property, there has been outspoken feedback from the Bloomfield community, who worry new developers could take away a grocery store they say is essential to people in the area. While many Bloomfield residents rely on Shursave for groceries, so do many residents of Lawrenceville, where the only grocery store is a Shop 'n Save at the far end of the neighborhood.

In February, the Bloomfield Development Corporation launched a petition to ensure that the development of the site would meet the needs of the neighborhood, which included the need for an affordable grocery store and affordable housing onsite. The petition gathered nearly 700 signatures.

In their press release, ECHO, which owns the properties of several grocery chains including Giant Eagle, Safeway, and Harris Teeter, noted that they are "aware of the value and need of a grocery store" in Bloomfield.