CP photo: Jared Wickerham
Howlers on Liberty Avenue in Bloomfield on Tue., Feb. 4, 2020
While Howlers' recent relocation news was a relief for the Pittsburgh music scene as a whole — the fundamental music venue is moving, not permanently closing — it wasn't a welcome announcement for all. In the past few years, Bloomfield has lost music venues and stores including The Shop, Bloomfield Bridge Tavern (BBT), and Juke Records, and now, Howlers is set to move to East Liberty at the end of the summer.


"Bloomfield is losing one of its last remaining music venues and is another nail in the coffin of the entertainment/nightlife/culture in [the area]," says Richie Colosimo of Pittsburgh dream-pop group Flower Crown.

The announcement also came with another hit for the music scene. Mary Jo Coll, Howlers' long-time booker, is set to retire in August ahead of the move.

Upon hearing the news, City Paper asked a few local bands, musicians, and music fans to share their thoughts on the changing musical climate in Bloomfield and memories of Coll's time at the venue. 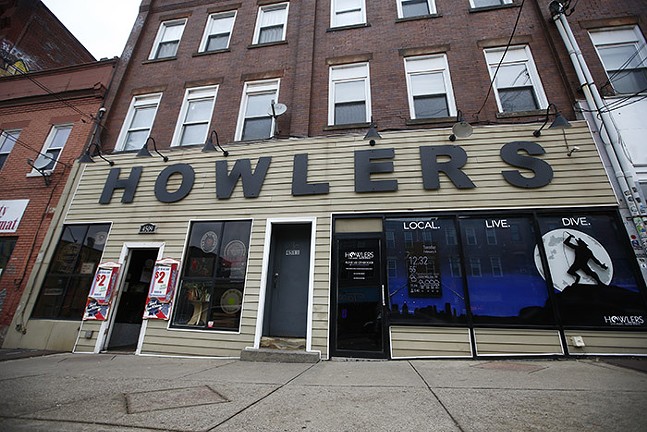 Howlers (with Mary Jo Coll at the helm booking gigs) is a leader in the local music community. A place you can always rely on to see great shows, meet up with friends, or just hang out. As an activist, I have held events there [and] one of the events I held was as a volunteer for the ONE Campaign (co-founded by Bill Gates and Bono) for International Day of the Girl, and Mary Jo offered and then made a buffet of food for anyone attending. No charge to us (we're non-profit) or to those in attendance. She simply did it to make the event something special. That's Mama Jo's way!


One of my fondest memories was probably 11 years ago, a few of my friends and their bands were playing on a Saturday night and my daughter wanted to attend. She was 13 and Mary Jo, being the loving but tough mom that she is, allowed my daughter to be there as long as she was under strict supervision (which she was). She had a blast drinking Shirley Temple mocktails and hanging out with all of my friends and listening to some of the best local music this city has to offer.


I am going to start a petition so [Mary Jo] can't [retire]. I am pretty sure I can get enough signatures in less than five minutes! She is a friend to the bands she books, the patrons, the music scene, and this city.

Howlers to me was like an old beat-up sweatshirt that you would never throw away because it felt so comfortable to wear. I always felt "comfortable" in Howlers.

With The Shop, BBT, and now Howlers closing, that is definitely another nail in the coffin for live music [in Bloomfield]. Not sure of any other venues in Bloomfield, save for the Honky Tonks happening at the Liedertafel Singing Society. And I always equate Brillobox with Bloomfield even though it's technically not. Hell, there were many, many nights I would easily walk back and forth between Brillo and Howlers photographing as many bands as I could.

I will always associate that venue with me discovering and befriending so many local bands. I put on my very first show there in January 2014. I taped an episode of HughShows TV about Ladyfest there. Finally, Howlers is synonymous with The Harlan Twins in my mind. ... And you just cannot mention Howlers without mentioning Mary Jo Coll.


Evan Mulgrave, TV’s NORM
I felt really surprised and pretty disappointed. I’ve loved playing there, I’ve loved going to see bands there, and it has been one of my favorite venues for years.

I think it’s a continuation of a trend in that part of town, sadly. Bloomfield Bridge Tavern closed, then Juke Records, now Howlers. Three great outlets to consume music all gone within a three-year period. I think it’s terrible for Bloomfield, for musicians, and a sad reality for a lot of independent venues and record stores.

Jeff Betten, Misra Records
This has been such a crazy news day, and then to hear about this on top of everything else going on in the world feels like a punch to the stomach. I think Bloomfield will make up for the loss, though. Nature abhors a vacuum and the community will continue to seek out music.

So many memories ... more shows and more nights with friends that I can count. It was the kind of venue that was intimate enough that it seemed like everywhere you turned, there was another one of your friends. Selling out shows with Roger Harvey, The Harlan Twins, and a New Year's Eve show with Andre Costello are among the highlights for sure.

I think I'll miss that camaraderie most of all. Between the sound people, bartenders, everyone — you were family when you were at Howlers! I know they're already planning to move the location, though, so I'm not too worried. I believe in Mama Jo!

Richie Colosimo, Flower Crown
Hearing this news actually really hurts. I've been living about two blocks away from Howlers for a long time. It's my spot. It's where I went to watch Jeopardy during the week, to catch a show on the weekend, or to unwind with friends after a gig. It was where my bands Flower Crown and Mires played some of their first shows ever and was our introduction into the scene. It's where I felt my first sense of community when moving to Bloomfield.

The amount of influence that it's had on the Pittsburgh music scene is immeasurable and its loss will be felt in not only the music community but the Bloomfield community. It's a place where artists and locals could coexist without the alienation of places like Lot 17 and Froggy's.

With the loss of Juke Records, The Shop, BBT, and the loss of Howlers, Bloomfield is losing one its last remaining music venues and is another nail in the coffin of the entertainment/nightlife/culture in Bloomfield.

Hitting up Howlers a lot for the last 10 years introduced me to a ton of Pittsburgh musicians, which helped me get some of my first work as an illustrator. There is no better spot in the 'Burgh for DIY shows, album releases, crushed PBRs, and cigarette smoke. Howlers has always been a unique spot, a creatively healthy (if smoky) cross-section of locals and musicians. There's hardly a better spot for a band to start out with their earliest shows. The cheap door fee, cozy size, and the location make it a good spot for a brand new band to draw an initial audience, no matter how many turn out. I'm really going to miss it.

Howlers has such a huge following/group of artists that play there consistently to really have a great niche in the PGH music scene. Honestly, I'm just really sad that we’re losing a really special place ... the T-shirt ceiling alone is an encyclopedia of killer PGH/touring bands. [When they relocate], I hope that ceiling makes the journey.

Go to shows, support your local bands, and venues. You can’t take for granted that these places we all know and love will always be there for us.