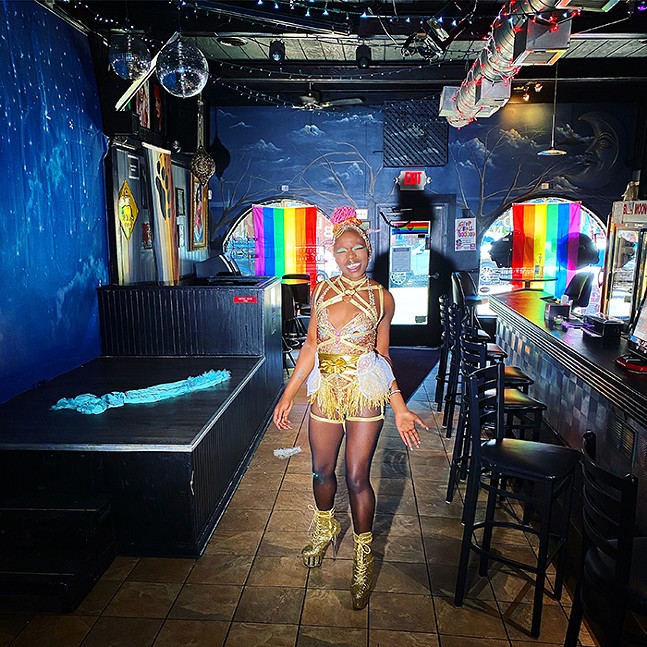 Photo: Rachel Rampleman
Luna Plexus performing at Blue Moon for Life is Drag, part of Bloomfield Garden Club
The monthly salon series Bloomfield Garden Club came out of the need to have live, in-person events during COVID-19. Even with the pandemic winding down in an increasingly vaccinated Pittsburgh, organizer Tina Dillman says she wanted to continue the project, which highlights local and regional artists working across a wide range of visual and performance art.

The question was how to go about ensuring that audiences felt comfortable coming to BGC events.

Dillman, an artist and curator who launched BGC under her venture TD Projects, says she decided to take a different approach this year after having some difficulty getting people to come out to the first one.

"As I reflected of what worked for the BGC in 2020, I also took note of what didn't work, and well, I felt so stressed by curating and producing each event that I knew if I was to continue on with this project that I needed to work with others to produce it well, so that I could continue to grow along with the changing of the times, as things are opening back up and people are anxious for live entertainment," says Dillman.

Dillman partnered with a variety of arts professionals and organizations to achieve BGC's goal of providing an experimental platform for artists from various backgrounds to "create new work, and to provide sources of revenue for those that are the most vulnerable —‌ ‌female, a mother, queer, or identify as other than just white."

She collaborated with Scott Andrew, an arts educator and local multimedia artist described in a press release as specializing in "queer oriented video, installation, and performance." The Garfield-based art space Bunker Projects will serve as a host site community partner. Also involved are the Kelly Strayhorn Theater in East Liberty and the Lawrenceville LGBTQ bar Blue Moon.

KST and Blue Moon contributed their sites for a video production by Rachel Rampleman, BGC's first visiting artist in residence. The New York City-based artist documented the Pittsburgh drag scene for her ongoing series, Life is Drag. The videos will premiere during a two-night event with live performances by local drag queens featured in Rampleman's work, taking place Sat., June 12-Sun., June 13 in the back lot of Bunker Projects. 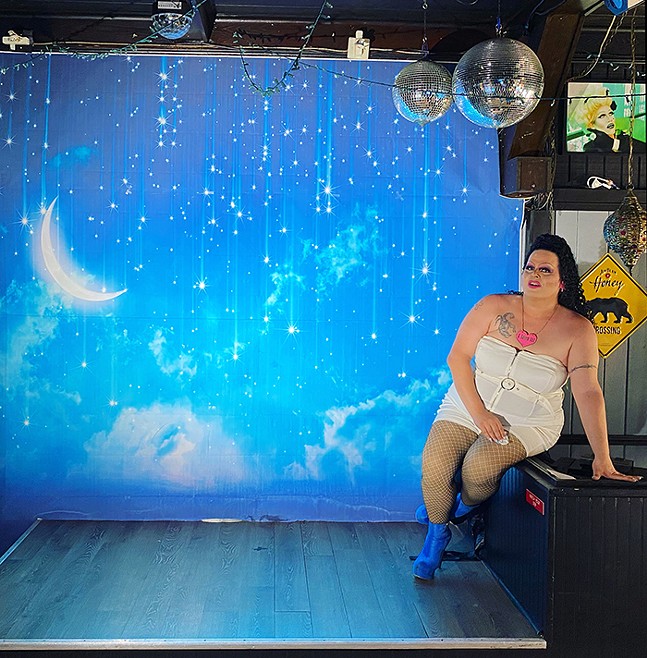 Photo: Rachel Rampleman
Cindy Crotchford performing at Blue Moon for Life is Drag
Dillman previously worked with drag performers for a BGC exhibition that opened in September 2020 at UnSmoke Systems in Braddock. The show, which highlighted several local artists working in a variety of media, demonstrates Dillman's desire to continue building on BGC.

"I am always working towards how I can better my surroundings and support my community, while growing as a professional and individual," says Dillman. "In looking at ways to grow the BGC in 2021, it came natural for me to expand the borders of the artists that I am working with, as I am one that is always supporting others, and I think it's necessary for artists and people to grow by traveling, meeting new people and increase their networks, like cross-pollination. The potential of the beauty and magic that come from collaboration and the influence of others is what I am always striving for — how can I best create magic, and that always happens when there is a meeting of the minds, working with others to create the impossible."

The festivities don't end at Bunker Projects, as BGC makes it way to various venues in and around the city. On July 10 and 11, the BGC will host a variety of performances at Braddock Farms, an urban garden operated by the nonprofit Grow Pittsburgh. Performers include a dance piece by Nick M. Daniels, media by Erin Mallea with Jen Vaughn, and music by Shawna Roxanne.

The events continue on Aug. 14-15 at the Union Project in East Liberty, on Sept. 11-12 at the Hamnett Place Community Garden in Wilkinsburg, and on Oct. 9-10 at the Vandergrift Public Library & Casino Theater. Besides dance, music, and media, the lineup will also include artists representing comedy, ceramics, photography, and literature.

Dillman says that, while she encourages people to experience the 2021 BGC, she understands that concerns are still there.

I am hoping this year people feel more comfortable being outside with others," says Dillman. "I am still going to recommend that we social distance with seating and wear a mask till we are at a higher vaccination percentage. I don't want to put anyone in jeopardy, but I also want to provide opportunities for artists and the community to safely engage through the arts."

Details on ticket prices and other information on BGC can be found at tinadillman.com/the-bloomfield-garden-club.