This dynamite evening of theater enthralled me from beginning to end. 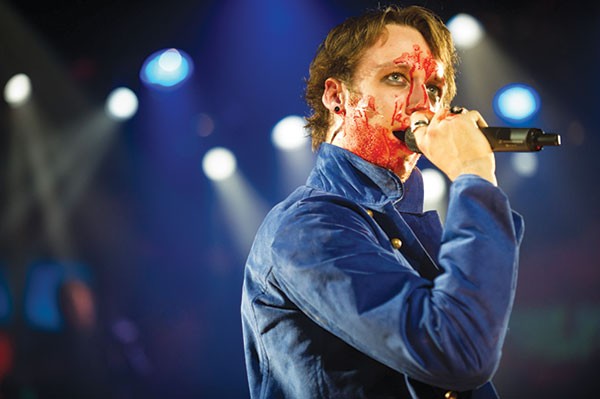 The idea behind Bloody Bloody Andrew Jackson is that Jackson was the first "American" president. According to book-writer Alex Timbers and composer/lyricist Michael Friedman, Jackson forced his way into American politics by lambasting our first six presidents as old-guard politicos who were keeping alive the notion of British aristocracy.

The word "musical" might be misleading. Bloody Bloody is more like a hip/cool history pageant written by Bertolt Brecht: brief rock numbers commenting on the action; the virtual absence of a fourth wall; self-knowing, self-mocking irony and satire; and a mountain of extremely funny and excessively intelligent jokes.

It's all to tell Jackson's story. Much of what we consider the American character was put there by Jackson; he forged our "land of the people" ethos, doubled the size of the country, founded the Democratic Party, and campaigned for direct democracy.

And, oh yeah, he committed genocide. In order for America to be what it's become, we had to kill the people already here. As both a public and a private citizen, Jackson murdered as many Native Americans as he could. The show specifically asks: "American hero or American Hitler?"

Sorting out that question makes for a dynamite evening of theater that enthralled me from beginning to end. Timbers and Friedman have created a show as noisy, freewheeling and dangerous as Jackson's legendary inauguration.

Michael McKelvey directs with the exact fast-paced gusto required. This can't have been an easy piece to put up — Timbers and Friedman really have created a barnburner — so it's perhaps not entirely McKelvey's fault that it seems to get away from him now and again. But that's a minor complaint compared to his major accomplishments.

The work of this design team and the huge student cast, crew and fleet of musicians are nothing short of astounding in their energy, focus and drive. And it gives me great pleasure to single out Reed Worth's electrifying, mammoth turn as Jackson; it's a star-making part, and Worth gives a star-making performance.