Photo: Courtesy of Netflix
Ana de Armas in Blonde
The most damning part about Blonde (now streaming on Netflix), is that director Andrew Dominik has empathy inside of him.  His 2007 Western The Assassination of Jesse James by the Coward Robert Ford found the soft heart of a mass murderer. Killing Them Softly showed us that gangsters were just as hurt by the economic collapse as the rest of us. His pair of documentaries about musician Nick Cave are pure showcases of sympathy. So, Blonde begs the question: What the hell happened?

Unfortunately, we don’t have to speculate on the answer. Much like Blonde itself, Dominik’s thinly veiled snuff film theoretically based on the life of Marilyn Monroe, his interviews have substituted subtlety with sledgehammers. In his disastrous and illuminating interview with Sight and Sound Magazine, he says about his subject: “It’s about a person who is going to be killing themself. … It’s not looking at her lasting legacy. … If you look at the Instagram version of her life, she’s got it all. And she killed herself. Now, to me, that’s the most important thing. It’s not the rest. It’s not the moments of strength.”

Deciding to make a sprawling epic on one of America’s most famous figures by seeing their suicide as a fundamental weakness and working your way back from there is shaky territory, and the ground shifts underneath Blonde’s feet at all times. Based on Joyce Carol Oates’ novel, the film depicts Monroe (Ana de Armas) as a weak child whenever possible, using her early trauma to define every part of her, not even remotely interested in a moment where she might overcome it, and use it as a symbol of hope for something better (something Monroe, of course, did many times in her real life).

In Blonde, happiness isn’t an option for his lead, as it would imply that people are more than the sum of the worst things that have happened to them. Dominik says in the same interview, “I'm more interested in how she feels," but he clearly doesn’t have the talent or possibly the interest to grasp that there’s a wide spectrum of emotions at his disposal to give his subject more than a singular dimension. 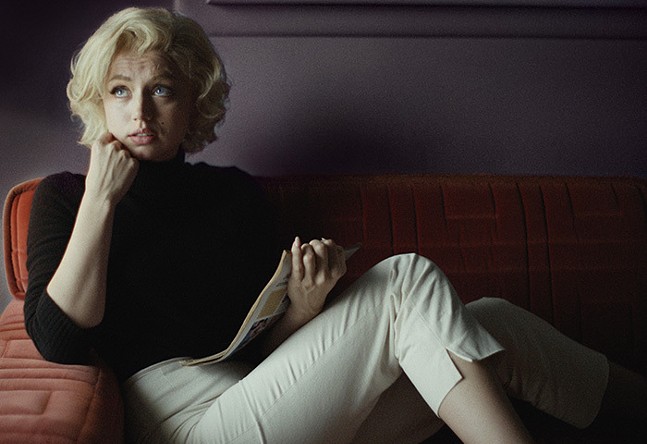 Photo: Courtesy of Netflix
Ana de Armas in Blonde
He’s lucky, then, that his talents certainly lie in finding a compelling image, because Blonde delivers those in spades. Much has been made of the film recreating the most iconic of Monroe’s many photos, but damn near every frame in the film radiates beauty, cutting through Netflix’s generally flat and sloppy style to deliver something wildly pretentious and overstuffed, but always interesting to look at. If there’s one thing that the film does actually understand about its subject, it's that hers was a life lived on a frequency that most of us can’t begin to comprehend, and it tries its hardest to match that stylistically.

There are a lot of other talents on display here. De Armas has become Hollywood’s It Girl after her roles in Knives Out or No Time to Die, and she’s an undeniable presence here, performing the monumental feat of capturing Monroe’s ethereal aura. And there’s brilliance elsewhere, from Chayse Irvin’s cinematography to Nick Cave and Warren Ellis’ haunting score.

On the topic of the score, some of the songs and the film itself have drawn comparisons to David Lynch’s Twin Peaks film Fire Walk With Me, in that both are explorations of a girl doomed from the start. Yet, I find the comparisons somewhere between asinine and insulting. Lynch’s film has its obvious flaws, but it always cares deeply for Laura Palmer; it sketches out the moments of joy she had just as much as her pain.

Blonde couldn’t care less that Monroe had moments of peace, moments where she could be herself; everything is simply an excuse to get to the next atrocity. This is a movie that has her say “Daddy” so much to the men in her life, who are more than happy to exploit her (these include her real-life ex-husbands, playwright Arthur Miller and baseball legend Joe DiMaggio, played by Adrien Brody and Bobby Cannavale, respectively). 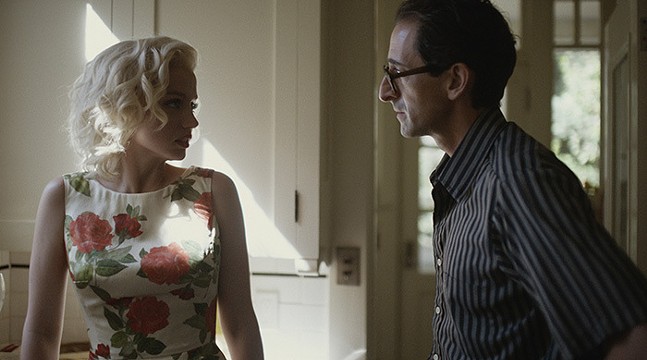 Photo: Courtesy of Netflix
Ana de Armas and Adrien Brody in Blonde
One of the film's more appalling moments is a long take of Monroe being forced to give oral sex to "the President" (no names are used, but surprise, it's JFK.) That no evidence exists to prove this happened between two very real people makes this especially despicable. For the last 45 minutes, she’s barely a human, only a puppet being dragged from place to place for the next person to use her.

Loose interpretations of a person’s life can work well; there’s a value in caring more about how a person thinks than listing their life’s work. But Blonde doesn’t actually want to understand Monroe; that would require engaging with one of the most complicated figures in our culture. Here, armchair psychology and abject cruelty pass for a “complex portrait.” Try as he might, Dominick can't hide his contempt with superficial beauty.
Blonde is now available to stream on Netflix. netflix.com