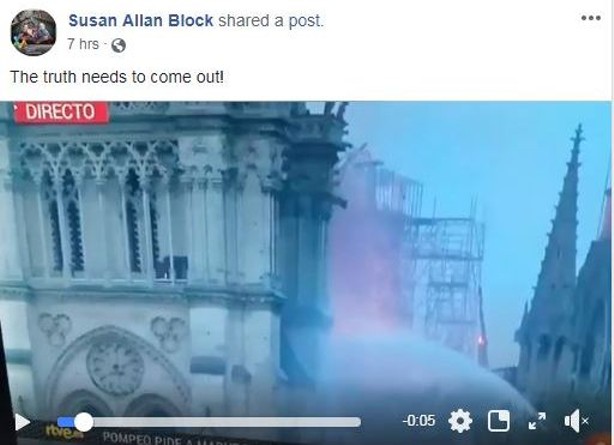 Screenshot taken from Facebook
This was a historic week for the Pittsburgh Post-Gazette and its parent company Block Communications. The paper was awarded a Pulitzer Prize for breaking news reporting in response to the Tree of Life shooting last fall. That award included not only great breaking reporting, but also investigations into the alleged shooter Robert Bowers.

Those investigations detailed Bowers' prolific internet and social media use, which was filled with anti-immigrant, anti-Semitic and anti-Muslim rhetoric, and alt-right conspiracy theories. One of Bowers’ post read, “Open your eyes! It’s the filthy EVIL jews Bringing the Filthy EVIL Muslims into the Country!!”

But in this same week, a board member for the company that owns the P-G, Block Communications Inc., was sharing her own anti-Muslim conspiracy theories related to the fire that burnt much of the Notre Dame cathedral in Paris.

Susan Allan Block is the wife to Allan Block, who is the chairman of Block Communications, and the sister-in-law to John Block, the Editor-in-Chief and Publisher of the P-G and the Toledo Blade. She was named to the BCI board in October 2018 and Allan Block said she “will be on a slate of directors to be elected by shareholders at the company’s annual shareholder meeting in January,” in an October 2018 Blade article. BCI also owns five local TV stations in Idaho, Illinois, Indiana, Ohio and Kentucky.

"Even if it was on purpose we will never be told that! Can you imagine what the French response would be to that! Uncontrollably! Total chaos! We will never know!"

Shared from a friend's news feed. This photo was taken at the scene of the fire today. Why were these men laughing?!

"12 churches, in France, have been attacked in the last month and a media blackout. It’s Easter week. Yeah, a coincidence. Ok"


Here's Susan Allan Block - board member of the Blade and Pittsburgh Post Gazette's parent company Block Communications and wife to the board chair - posting Islamophobic conspiracy theories about the Notre Dame fire. pic.twitter.com/qk12bpaM9w

The attached photo is of two men who appear to be smiling and laughing with a burning Notre Dame in the background. According to Politifact, the image is doctored and the two men were artificially inserted into the image. Politifact says the doctored image has been “used to support claims that the cathedral fire was a terrorist attack and fueled anti-Muslim rhetoric.”

A call to BCI requesting comment for this story was not returned.

French officials have said the Notre Dame fire started on accident from an electrical short circuit.

On April 17, Susan Block shared a short video on Facebook that appears to show a man walking on the balcony of Notre Dame as it was burning. She wrote, “The truth needs to come out!”

According to Politifact, that video was originally posted on an aggregate social-media page called Equinox News Network with the caption "No workers present at the time that the Notre Dame Cathedral fire started......So who is this guy dressed in Muslim garb??"

But Politifact notes the video was “flagged as part of Facebook’s efforts to combat false news and misinformation on its News Feed,” although the video is still up, and the person in the video is actually a firefighter. The video was cropped and edited out of a more than three-hour livestream and, according to Politifact “doesn’t allow the viewer to clearly see it was a firefighter” and the clip “doesn’t last long enough to show other firefighters who show up in the same area moments later.”

P-G reporter Christopher Huffaker shared Rosekrans’ tweet and showed frustration that ownership would traffic in posts that undermine the work of journalists. Huffaker also noted the similarities to Susan Block’s posts to that of alleged Tree of Life shooter Robert Bowers.

Journalists who just won a Pulitzer for covering a mass shooting inspired by exactly the sort of racist conspiracy theory she’s spreading.


P-G web associate/designer Matt Moret was also dismayed by Susan Block’s posts. On April 17, he tweeted “Nothing to see here, just a head of my news company spreading bigoted falsehoods and questioning the validity of an industry propping up her wealth.”

The Newsguild of Pittsburgh, the union that represents P-G staffers, has been in a longtime battle with BCI to secure a raise and better working conditions, as has the Toledo newsguild. Both staffs have not seen a raise in more than 13 years.

Last July, before she was named to the board, Susan Block shared her thoughts about The Blade in a Facebook post writing, “I’m not an employee of The Blade or any of our business. I could care less about ‘saving The Blade.’ We run it like a charity for the benefit of the community. It’s way more trouble than it is worth.”

Before Susan Block was named to the BCI board, she worked for a hedge fund, owned a pastry shop, and was involved in pharmaceutical sales.

On April 17, Susan Block also shared a link to a Russia Times story about Catholic Churches in France that had been vandalized. She wrote: "'Something' is happening & 'someone' is responsible! Wake up world - there are people who want to destroy everything Christian & society as we know it!" Russia Times is the TV network fully funded and operated by the Russian government.


She believes this garbage but not 14 Pulitzer Prize-winning journalists who witnessed her brother-in-law’s tirade. Interesting.